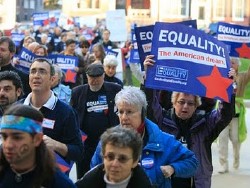 After the New Jersey Senate voted down a gay marriage bill in January, Lambda Legal and Garden State Equality have gone back to court – arguing that the state constitution requires granting marriage rights to same-sex couples. On the one hand, the case is not unlike those we heard in California, Iowa, Massachusetts and Connecticut – but it has a new helpful twist. The New Jersey Supreme Court ruled in 2006 that gay couples must have the same legal benefits, but told the legislature that civil unions are okay. Four years later, we have evidence in New Jersey that civil unions are unequal – tangible proof that goes way beyond the emotional arguments we often hear from advocates. This is significant, because swing voters don’t believe that we must call it “marriage” for gay couples to get equal benefits. While same-sex couples are denied any federal marriage benefits, the New Jersey case proves that states are nonetheless doing harm themselves by setting up a separate institution like civil unions. And a favorable decision in New Jersey could set a strong precedent for making gay marriage a reality.

On March 18th, Lambda Legal filed a motion with the New Jersey Supreme Court seeking marriage equality. What’s unique about this case is that the Court ruled in 2006 that same-sex couples must have equal benefits, but said civil unions could accomplish that same goal. Back then, I argued it would only be a matter of time before the civil unions scheme would fail to grant the same protections as marriage – and the New Jersey Court would have to revisit it:

“We could expand domestic partnership rights to include all the current legal rights of marriage, but it still wouldn’t resolve a basic problem. ‘Marriage’ is a universally understood concept throughout the world that courts will honor as a relationship worth preserving. The law doesn’t make decisions on what’s said – but on what’s left unsaid. When a committed couple is not married, they have to go through many more hurdles and steps to get basic rights honored that a married couple can take for granted. Although places like California have passed comprehensive domestic partnership laws that expand the rights of same-sex couples, not even the brightest legal minds today can draft a law that will take into account every possible scenario to make them equal to marriage.

And that’s where we are – four years later. The New Jersey legislature responded to the 2006 court ruling by expanding their civil unions to include “all the rights” of marriage (like California’s AB 205) – and set up a Civil Unions Review Commission. The Commission’s report, released two years later, documented how the law wasn’t working – but in January 2010 the New Jersey State Senate still declined to pass marriage equality. Now we’re back in court, with many tangible examples.

For example, gays in New Jersey who apply for a job or get called for jury service must inadvertently out themselves when asked the question “are you married?” – because to say they are “domestic partnered” exposes their sexual orientation. As a direct result, they have faced discrimination. Many couples in civil unions have had a harder time getting hospitals to grant them emergency room visitation rights or add their partner to their health insurance plan. The law already gives them that right, but not being able to say they’re “married” creates practical barriers to achieving it. “The word ‘marriage’ carries more weight,” said a witness from the Civil Unions Report. “It’s more legally binding in the minds of a lot of employers and in the minds of insurance companies too.”

Except for the most conservative parts of the country, gays have won in the court of public opinion on civil unions and domestic partnerships. Whether same-sex couples should have “equal” benefits is no longer the question – with even many Republicans coming out in favor. The issue is still whether gays “need” marriage – and the movable middle is still unconvinced. Emotional arguments like “separate is unequal” have not been helpful (and can even be counter-productive), because it doesn’t really answer their questions. To win these hearts and minds, they need proof beyond emotion on why it really matters.

Of course, the most clear distinction between marriage and civil unions is that the latter doesn’t exist at the federal level. A state can create civil unions that include all the rights that married couples have under state law – but it would have no effect on Social Security benefits, immigration rights or federal tax benefits. But a state can’t really do anything about that – because federal law under the Defense of Marriage Act (DOMA) is what stands in the way. The question is, are gay couples hurt in a tangible way when a state chooses not to grant them marriage rights – but instead forms an institution like civil unions?

What’s significant about the New Jersey case is that it answers that question. “Marriage” is such a unique institution and a universally understood term, that a state can’t simply amend its laws to give domestic partners the same rights on paper it grants to straight married couples. The rights that come from being married are not just a checklist that can be amended. And gay couples don’t need marriage rather than civil unions because it would make them “feel” more equal – it’s about how others perceive their relationship.

And that’s what will help voters and judges understand why civil unions are inadequate.