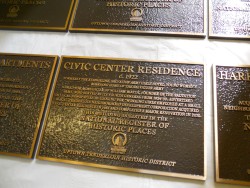 “I’ve never been more enthusiastic about where the neighborhood is going,” said Randy Shaw at yesterday’s ceremony to install new plaques for the Uptown Tenderloin district. With an historic designation for the neighborhood and extensive plans underway for a Tenderloin History Museum, 73 properties in the area that are “contributing structures” have ordered bronze plaques to place on the buildings’ exterior. Beyond giving the Uptown Tenderloin a visible identity, these plaques can instill pride in a neighborhood where too many low-income residents have felt trapped – often embarrassed – to call home. Over 100 people gathered at the Ambassador Hotel for the installation ceremony yesterday, with an enthusiastic Mayor Gavin Newsom who was on hand to announce his Office’s financial support.

One reason why an historic district is good for the neighborhood is that the Tenderloin too often lacks a positive identity. If a fire happens on Folsom Street, they call it the Tenderloin – but apartments on O’Farrell get advertised as being in Lower Nob Hill or Civic Center. “We need a way for people when they walk through the neighborhood to explore the history,” said Shaw, whose Tenderloin Housing Clinic spearheaded the effort.

Did you know that Frank Capra used to live at the Drake Hotel? Or that from 1912 to 1917, the Kiran was a house of ill fame run by “Diamond” Jessie Hayman – for whom Jessie Alley is named? Muhammad Ali trained for his boxing championships at the Cadillac Hotel, where Jerry Garcia briefly lived. President William Howard Taft came here for the groundbreaking ceremony of the Central YMCA, the first home of Golden Gate University and where Willie Brown stayed when he first came here from Texas.

Already, Tenderloin residents are taking pride in the plaques. At yesterday’s ceremony, Shaw described how tenants at the Midori Hotel on Hyde Street were snapping photos.

The ceremony was at another historic Tenderloin landmark – the Ambassador Hotel on Mason, where Hank Wilson ran a hospice in the 1980’s for people with AIDS. As Don Falk of TNDC (which now owns the building) said yesterday, Hank made his mark at the Ambassador during the early dark days of the epidemic – when the City was slow to respond. Now the plaques pass on this history to residents and tourists alike, keeping the legacy alive.

“We know that good architecture can inspire people,” said Falk. “The beauty of these restored buildings inspires us all.” Because the Uptown Tenderloin is now a national historic district, property owners can get tax credits for restoring the building exterior.

Shaw acknowledged some people in the room who made all this possible. Historian Michael Corbett, whose research produced our successful application to get the Uptown Tenderloin named a historic district. Elaine Zamora, whose Community Benefit District helped procure grant money from the City for this project (“if you need something done in this neighborhood,” said Randy, “call Elaine.”) And of course, our curator Sarah Wilson – who coordinated with all the property owners to make the plaques a reality.

Mayor Gavin Newsom, who spent a night at the Ambassador Hotel shortly after being appointed to the Board of Supervisors in the 1990’s, was on hand to unveil the plaque for the hotel. The Mayor’s Office of Economic & Workforce Development (MOEWD) gave this project $15,000 for the design, purchase and installation of the plaques. “His greatest legacy as Mayor,” said Shaw, “has been the transformation of the Tenderloin neighborhood.”

Although 73 properties have ordered plaques for their buildings, the Uptown Tenderloin actually has 380 “contributing structures” that qualify for getting one. Interested property owners should call the Tenderloin Housing Clinic at (415) 771-9850 for more details.