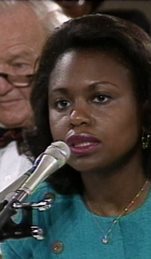 Admirers of Professor Anita Hill would contend the law school professor achieved greatness by bringing the subject of sexual harassment into the public sphere. On the other hand, a case can be made that the professor had greatness thrust upon her for doing what she felt was her duty. Academy Award-winning filmmaker Frieda Lee Mock’s newest documentary is a portrait of both Hill and the Senate hearing that made her a hero or a villain depending on your political leanings. That film, “Anita—Speaking Truth To Power,” opens today at the Embarcadero Center Cinemas.

What pushed the Norman, Oklahoma law professor into the national limelight was the first President Bush’s decision to nominate Clarence Thomas to the U.S. Supreme Court. Vetting Thomas for suitability meant talking to people who knew or worked with the prospective Supreme Court justice in the past. Hill had worked under Thomas at the Equal Employment Opportunity Commission (EEOC), and she told the investigators about Thomas’ penchant for sexist behavior and regularly uttering such offensive bon mots as loudly wondering who left their pubic hair on a Coke can. It may sound ironic that the EEOC division Thomas headed was tasked with investigating sexual harassment claims. But political watchers familiar with the period would understand Thomas was yet another Reaganesque government regulatory agency appointee chosen to undermine their assigned agency from within.

Mock shows Hill’s literal disconnection from the world of Washington politics was both her strength and her weakness. Her recollections of Thomas’ harassing behavior became more credible because she received no ultimate reward for speaking up. Yet that same disconnection prevented her from realizing Thomas had friends in high places determined to protect his career.

The filmmaker shows the politically naïve Hill didn’t turn out to be a naïf. In reality, the Senate hearing called to investigate Hill’s claims regarding Thomas’ behavior was more dedicated to finding some way to publicly embarrass or humiliate her. But Hill calmly and persistently kept telling her truth in the face of Senatorial bullying and inaction. New Yorker journalist Jane Mayer and New York Times editor Jill Abramson provide sometimes caustic commentary on the occasionally surreal hearing.

Mock’s use of the familiar leftist phrase “Speaking truth to power” as the subtitle of her documentary delivers a rhetorical poke to the mental eyes of those right-wingers who’ve bellowed that Hill was a liar. It’s also a literal description of what Hill’s public testimony before the Senate Judiciary Committee amounted to.

Yet if the point of speaking truth to power was to cause the abusers of power to suddenly shrivel up and die (or even change their ways), that didn’t happen. Clarence Thomas was ultimately confirmed to the US Supreme Court anyway. The Senate Judiciary Committee members repeated their earlier vote favoring Thomas in spite of Hill’s testimony.

The Committee Senators and their staffers didn’t prepare for the hearing with Hill by talking with expert witnesses who could have given them Sexual Harassment 101 briefings. The questions the Senators asked of Hill leaves the cynical impression that the Hill/Thomas hearings was less a triumph of public pressure and more a public exercise in political damage control.

Mock shows Hill’s real triumph lay outside the hearing room’s confines. The Oklahoma law professor’s ordeal embodied the hollowness of the sexual harassment laws then available. What point was there to having such laws if one was prejudged for using them? Senators Arlen Specter and Howell Heflin may have rationalized their line of questioning as queries likely to be raised by Joe Average.

But footage of these Senators showed they didn’t know the difference between curiosity and obvious sexist projection. Then-Senator (and now Vice-President) Joe Biden and the late Senator Edward Kennedy also fail to acquit themselves with honor through their failure to prevent the questioning from getting out of hand. Committee Chair Biden in particular wimped out by not calling in other women who could confirm Hill’s story.

The all-white male members of the Senate Judiciary Committee were not the only men who wound up looking terrible. The black male political establishment of the time didn’t want to kill Thomas’ nomination because, as interviewee Professor Charles Ogletree put it, “you don’t do that to a brother.” Yet solidarity on the basis of race and sex doesn’t exactly advance the black community’s fortunes. As feminist journalist Laurie Penny pointed out, no progressive political movement can truly succeed when its female members’ concerns are routinely marginalized.

Clarence Thomas’ use of the loaded language of lynching to deflect any Senate criticism of his behavior is ironic. The Committee Senators definitely didn’t take Hill at her word. Thomas was more likely to be lynched by anti-miscegenationists who hated black men marrying white women.

Mock doesn’t attempt to interview the Thomases. That’s not a deficit, as it’s highly doubtful they’d contribute anything constructive. Thomas’ behavior has already been discussed above. The glares of wife Ginny Thomas seen on hearing footage conveys only anger at having her sense of entitlement challenged. The aspartame-like sweetness of Mrs. Thomas’ voice heard at the film’s beginning can’t hide her blood feud-like anger at Hill’s testimony despite the passage of over 15 years since the hearing.

Besides Mrs. Thomas’ verbal venom, Hill has endured everything over the years from death threats to an anonymous law student who left pubic hairs on a test. That the straightforward law professor survived all these attacks and stayed active fighting sexual discrimination resulted from her admirable ethical strength and family support…and a personal streak of stubbornness.

Mock’s film truly demonstrates that the ultimate impact of the Hill/Thomas hearings is captured in Francis Bacon’s immortal quote “Truth is the daughter of time, not of authority.” Conservative attacks on Hill’s credibility foreshadowed the GOP’s present-day War on Women’s continual attacks on women’s rights. An “Anita Hill 20 Years Later” event attended by the likes of Gloria Steinem and Hollaback’s Emily May testify to the continued relevance of Hill’s courageous and dignified action.