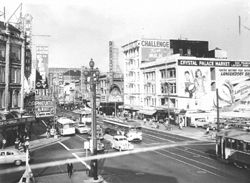 Early next year, the Board of Supervisors will vote on whether to make the Mid-Market neighborhood a Redevelopment Area. When the Planning Commission considered the issue last June, dozens of SRO tenants living in the area spoke with one voice in urging that Redevelopment be stopped in its tracks. District 6 Supervisor Chris Daly has urged Redevelopment to dramatically increase affordable housing in the area, but his efforts have been rebuffed. New data now confirms that Mid-Market real estate is booming without Redevelopment, that the area is becoming a leading city housing hub, and that the property used to justify the Plan’s expansion has been sold. Mid-Market Redevelopment has become an idea whose time has passed.

The idea for transforming the Mid- Market neighborhood into a Redevelopment Area originated in 1995, and the process will soon reach the Board of Supervisors. But as is often the case in fast changing San Francisco—witness the sudden birth and death of the dot-coms and the fall and rise in office vacancies seemingly overnight-creating a Mid-Market Redevelopment Area is no longer necessary.

Back in 1995, some saw transforming Mid-Market into a Redevelopment Area as essential for jump-starting the area’s economy. But that was before the dot-com boom, and the continued post-boom rise in Mid Market economic activiy.

According to the current edition of the Central City Extra, property values in Mid-Market have increased over 40% since 1995. The area generated $12.5 million in new property taxes in the past year alone, and this total should continue to rise in future years without any participation by the Redevelopment Agency.

Slow as things were Redevelopment was initially discussed in 1995, Mid-Market is now one of the city’s hottest real estate markets. A majority of the parcels on the south side of Market between 6th -7th Streets—where vacant sites and storefronts are most prevalent-are currently for sale or are in the process for being sold to developers with active plans for the area.

Mid-Market is not Bayview-Hunters Point, where Agency investment was widely seen as necessary to stimulate private investment. In Mid-Market, the problem is not a lack of economic stimulation, it’s that the market is so overheated that some sellers are hesitating to complete deals for fear that they are not getting the highest possible price.

Overall, an area that appeared blighted and in need of Agency stimulation in 1995 now has 3000 housing units in the pipeline. Other than Rincon, Mid-Market is the city’s leading center for future housing development.

There was supposed to be a nonprofit project at 10th and Market Streets, and the Project Area was extended to 10th Street for that reason. But although this project is now dead, the proposed Mid-Market Redevelopment Area still includes Market Street between 8th and 10th Streets, a virtual “blight-free” zone. TNDC is selling the parcel responsible for this expansion, and, confirming the non-Agency caused boost in property values, will realize a tremendous profit.

As the economic premise of Mid-Market has slipped away, some feel the Redevelopment process must be approved to justify “years” of meetings on the issue. But this version of the George W. Bush “stay the course” argument is no more rational regarding Mid-Market than it is for Iraq.

The vast majority of the Mid-Market Project Area Committee (PAC) has served for only a few years. The community only elected four of the PAC members, and that election occurred in 1997.

PAC members have not labored for years, and the Mid-Market PAC has never been representative of the community.

The Mid-Market PAC is, by design, dominated by commercial landlords, downtown business groups like SPUR, and real estate interests seeking the neighborhood’s gentrification. The fact that a Redevelopment Plan authored by such an unrepresentative group is now at the Board of Supervisors shows that as much as San Franciscans like to brag about IRV, the Sunshine Act, and district elections, we still allow democracy to be subverted when low-income neighborhoods are involved.

After the PAC approved the Mid-Market Plan earlier this year, Supervisor Daly told Beyond Chron that “there is no reason to proceed with a Mid-Market Area if only 12% of units are affordable. I have successfully worked to get developers to provide as much as nearly triple that amount.” Daly subsequently reiterated this position in an October 18 press conference called by community groups, in which he argued that the Plan should follow the lead of Trinity Plaza in ensuring that at least 35% of the privately built housing units in Mid-Market be affordable.

First, the affordable units at Trinity, and in fact all of the project’s 1900 units, will be rented to tenants. In contrast, the “affordable” housing developers will be required to provide in Mid-Market are condominiums, to be sold at prices that current neighborhood residents cannot afford.

Second, Trinity brought an historic level of rental affordability because the District 6 Supervisor (a fellow named Daly) and Trinity tenants backed by community pressure negotiated the agreement. The Redevelopment Agency would never have demanded so many affordable rental units from a close ally of the Mayor.

Third, Agency control of Mid-Market prevents tenants, neighborhood activists and the Board of Supervisors from negotiating agreements with developers that benefit low-income community residents, not future condo purchasers. Trinity Plaza proves that community activism, rather than Redevelopment Agency funding, is the essential bulwark against Mid-Market gentrification.

Community activism’s capacity to prevent and/or seriously mitigate the gentrification of Market Street is why neighborhood activists so strongly oppose Redevelopment control. Activism was the key to saving the Tenderloin as a low-income neighborhood, and it can achieve a similar result in Mid-Market.

Michael Nulty, a leading Tenderloin activist and President of the Alliance for a Better District 6, believes Mid-Market Redevelopment is a critical issue because it “impacts the core of the district.” Sam Dodge, head of the Central City SRO Collaborative, echoes Nulty’s perception of the broad impact of the Redevelopment battle, noting it will create the district’s “longest legacy.”

To those who say Mid-Market gentrification cannot be stopped, keep in mind that there was a near consensus in San Francisco through the early 1980’s that the Tenderloin’s gentrification was not simply likely, but “inevitable.” Activists triumphed then, and activists can also prevail in the battle to maintain community and democratic control of Mid-Market.