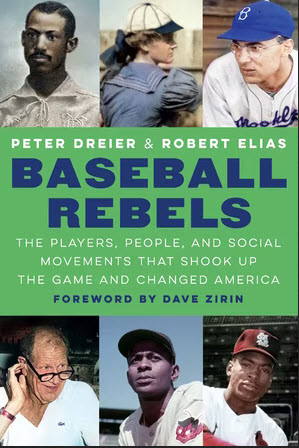 Recent books have pulled back the curtain on America’s hidden racial history. Two companion volumes, Baseball Rebels and Major League Rebels, by Peter Dreier and Robert Elias now do this for America’s Pastime.

Baseball fans will definitely want to read at least one of these books. Both offer politically nuanced and deeply researched accounts of how Major League Baseball’s racial and social justice politics mirrored the broader society’s. The authors give powerful accounts of how stars like Jackie Robinson, Jim “Mudcat” Grant and Dick Allen along with lesser known players like George Gmelch and “Subway” Sam Nahem  challenged the status quo.

Baseball Rebels and the Racial Divide

I’ve read a lot of baseball history books. Baseball Rebels is distinguished by the level of its research and its ability to understand the political nuances. For example, Dreier and Elias go beyond the stereotypical depiction of Jackie Robinson as becoming a racial moderate after retirement. They explain how Robinson never stopped pushing for greater post-career opportunities for black players and continually spoke truth to power. I’ve read the leading books and seen the many films on Robinson; Baseball Rebels provides the most perceptive portrayal of his political and social views of all.

Similar expertise is on display in the book’s account of the long misunderstood Richie “Call me Dick” Allen. I knew the outlines of Allen’s story but this book conveys the attacks on him so strongly that it got me angry at Allen’s mistreatment all over again.

Part of my reaction was remembering how my friends and I used to joke about Allen’s preferred first name, Dick. Dreier and Elias show why the media and team’s refusal to address a star player by their preferred name—an absolute given for white players—was no laughing matter. Instead, it reflected the deep racism of Philadelphia, the city’s media and the Phillies. The authors show that Dick Allen’s “misbehavior” in Philadelphia was a response to racial brutality—a racism that still keeps Allen out of the Hall of Fame (he fell one vote short last December).

Baseball Rebels does a terrific job decimating a core Major League Baseball myth: that Jackie Robinson’s integration into the majors radically changed both baseball and the larger society. They note how six years after Robinson only thirty-five former Negro League players had reached the majors. The Yankees had no black players until 1956, the Red Sox, 1959. There were no black managers until Frank Robinson in 1975.

If you think baseball’s biggest stars were immune to open racial discrimination please read these books.

Black baseball stars faced open discrimination into the 1970’s. The sports media kept the fact that black players had to stay in separate hotels and find restaurants to serve them out of their coverage. If you subscribed to The Sporting News as I did you never learned of its racist publisher and its role in keeping blacks out of the major leagues; we are fortunate to have a radically better sports media today.

The book also gives deserved honors to Curt Flood. Flood was viciously attacked by the sports media and white fans for claiming he refused to be a “$90,000 a year slave”—this is when he objected to being traded by the Cardinals to the Phillies, Yet the authors describe the incredible courage and integrity of a man who was baseball’s best centerfielder at the time yet walked away for workers rights.

I could repeat a lot of great stories from Baseball Rebels. Better to just buy the book. 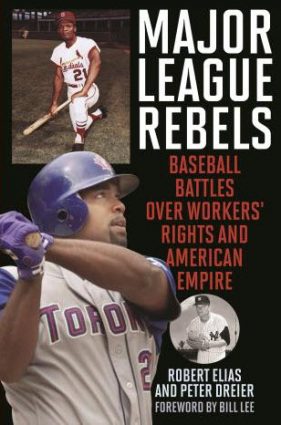 Baseball also had challengers to its flag waving, false patriotism. When I was young my two favorite players were Willie Mays and Tom Seaver. I knew Seaver openly opposed the Vietnam War but did not learn until this book how it brought him under attack from Mets fans. From challenging that war to the later War on Terrorism, it has always been hard for players to question the framing of baseball as consistent with conservative values.

Baseball owners are far and away the most conservative pro sports ownership group (Charles Johnson, the principal owner of the SF Giants, is among the largest contributors to the Republican Party. He even funds candidates claiming the 2020 election was rigged).

Racist owners like the Cubs’ Wrigley and the Red Sox’s Yawkey kept blacks out of Major League Baseball for decades. The impact of the current owner’s conservative politics is seen in the small number of managers of color and the even smaller number of general managers.

Blacks comprised a high of 27% of Major League players in the 1970’s. That total has fallen to 8%. The authors promote several strategies to increase black players but the real commitment from ownership to make this happen is not there.

Economics of the Game

Baseball stars make so much money today that it’s easy to forget the decade after decade where the top players like Sandy Koufax were vastly underpaid. The two books recount many examples of players having career years but owners feeling no obligation to raise salaries. When you see stories describing baseball labor strife as “millionairies battling billionaires,” this history is vital to understand.

Baseball Rebels and Major League Rebels uncover a treasure trove of lost American history. I want to thank the authors for reclaiming this lost history and setting the historical record straight.