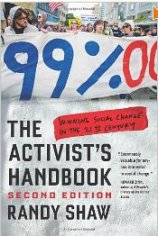 As Editor of BeyondChron, I regularly analyze social and economic justice campaigns. My new book, The Activist’s Handbook, Second Edition: Winning Social Change in the 21st Century, goes further by offering a strategic analysis of why such campaigns succeed or fail. Using San Francisco politics, California ballot initiatives, and state and national campaigns as a backdrop, I show how specific strategies and tactics make the difference between victory and defeat. I also detail how activists can best use social media and best harness such new media to traditional organizing and activism.

At a time when those seeking progressive change face powerful and well-funded adversaries, it is more important than ever that activists use the tools necessary to win. The book is an entirely updated version of the original, which the late Howard Zinn praised as “enormously valuable for anyone interested in social change.” It describes current campaigns from the Keystone Pipeline to the drive for immigration reform, and explains how smart strategies brought major victories for the gay rights movement.

If you enjoy reading Beyond Chron, I believe you will very much enjoy the new version of The Activist’s Handbook. And after reading the book, I would very much look forward to hearing people’s comments.