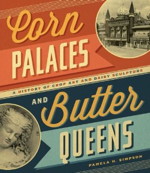 When I ordered Pamela Simpson’s Corn Places and Butter Queens: A History of Crop Art and Dairy Sculpture, I had no idea of the magnitude of this phenomenon. From 1870 through the 1940’s and even continuing today, county and state fairs featured buildings devoted to corn and artisan sculptures made out of butter. The Midwest was long the breadbasket of the world, so it made sense that fairs in Iowa, Illinois, Minnesota, Wisconsin and the Dakotas would use agricultural products as art. Competition was vigorous over which states could produce the greatest corn palaces, and if the book did not have photos of some of these exhibits, their existence would be hard to believe. Pamela Simpson has revived an entire world of forgotten rural folk art, producing both a good read and a visual gem.

Rural Americans in 20th century America created a vibrant cultural and artistic legacy that has gotten far too little attention. Farmers and agricultural companies were proud of the products they produced, and demonstrated this through art promoting wheat, corn and other crops, or sculptures made out of butter. For example, the Kansas exhibit at the legendary 1893 Chicago World’s Fair included a 28 by 82 foot pavilion adorned with “solid grain decorations, wrought in every conceivable design … No artist’s brush on canvas could have presented a scene more beautiful and appropriate.” Ohio’s exhibit was a replica of the Greek Parthenon whose glass columns were filled with grain.

Temples were built covered in corn, a giant steer was made of wheat, and butter sculptures served as both art and product advertisements. Until the start of the 20th century butter was largely a home industry, but companies like Beatrice Foods, Meadow Gold and Land O’Lakes then took off and used life-like butter sculptures to help build a national market.

These butter sculptures were not small figurines. Rather, they depicted such elaborate scenes as Teddy Roosevelt’s “charge of the Rough Riders” in the Spanish-American war, and lifesize examples of the “World’s Record Guernsey Cow.”

Raised in California, my experience with agriculture was our state’s giant corporate farms that spanned miles adjacent to major highways. Agriculture was controlled by large growers battling the farmworkers’ union, and there was little sense that there was a cultural pride in the growing of grapes, cantaloupes, strawberries, lettuce and other foods beyond making money.

Simpson’s book offers a broader perspective on the role of agriculture in rural communities. Yes, it is a nostalgic view. The small-scale pre-1940’s farmer has largely been replaced even in these communities and states with the large and corporate owner.

But this history is important both for what it says about the direction of U.S. agricultural policy, and what it means for those who still identify with this agricultural heritage. The rise of farmers markets has brought back the pride in smaller-scale food production, and may well revive the artistic and cultural connections that this book portrays and that once appeared to be forever lost.

Author Simpson died last year after completing the book but before it was published. She must have known that she had produced an indispensable cultural history. Thanks to her hard work, the book includes many photos from archives that Simpson found and which have never previously been available to public view.

Simpson’s work should be a staple at all county and state fairs this summer, and in museums detailing life in the United States from the 1880’s through the Great Depression. The book is not for everybody, but if butter sculptures, corn palaces and the “icons of abundance” interest you (and this review has not even touched upon the great postcards of giant corn cobs and the many women artists who made these beautiful butter works), you will love what Simpson has produced.