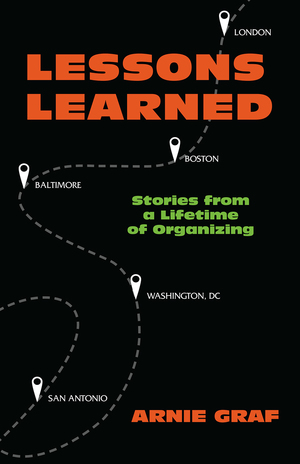 What do we mean when we talk about “community organizing” Is it helping a “community” achieve its goals? Helping communities define their needs? Building a base of people so that the community can effectively assert its interests?

If you are familiar with the organizing model of the Industrial Areas Foundation (IAF), their first answer  would be clear: community organizing is about building power. And if you want to understand how the 60+ IAF chapters built power, I strongly recommend Arnie Graf’s new book, Lessons Learned: Stories from a Lifetime of Organizing.

Graf’s stories cover his over forty years of organizing in the IAF stronghold of San Antonio as well as in Boston, Baltimore, Milwaukee, Washington, DC and England. Founded by Saul Alinsky, the IAF is a faith-based organization whose “community” is based in local religious institutions. When Graf began with the IAF in 1971 most chapters were in Catholic churches.  The faith-based model puts reverends, priests and other religious leaders in key positions, and their leadership often proves critical to the chapter’s success.

Graf and the IAF believe there are universal organizing principles. A science to community organizing whose rules must be followed to achieve success. The IAF is known for its rules about power and self-interest; Graf explains the power of one to one relational meetings, the importance of post-action evaluations, and the insistence on demanding respect.

Graf joined San Antonio’s IAF chapter in 1976 following the legendary organizer Ernesto Cortes, Jr. In The Activist’s Handbook I used Cortes’ quote about inspiring “fear and loathing” in elected officials as the subtitle of my chapter on rules for holding elected officials accountable.

As Graf recounts, IAF groups follow these rules. And they work. Like the legendary organizer Fred Ross, Sr., Graf believes that there is a right way to build power and a wrong way. The wrong way typically involves short cuts that undermine the broader strategy (Ross described short cuts as “leading to dead ends”). Graf uses campaigns as case studies for these universal principles. And he details how they brought major victories to long disenfranchised communities.

In the 1970’s, the IAF’s San Antonio Communities Organized for Public Service (COPS)  transformed the city’s power structure. Graf played a critical role in the chapter’s success but never sought public credit. He fits the IAF model of ensuring that credit goes to members, not paid organizers. Graf’s account of how COPS overcame San Antonio’s economic elite demonstrates how his persistent application of core IAF organizing principles made a huge difference.

Graf’s work in San Antonio helped empower its the Latino community. In Baltimore, where he joined the IAF’s BUILD chapter in 1980, Graf’s goal was addressing the city’s longstanding racial bias against its Black residents. Graf describes Baltimore as having a “split and disconnected personality.” Unlike COPS,  when Graf arrived BUILD was still in its formation stage. It was Graf’s job to build the church network, which wasn’t easy. Graf had to navigate differences among church leaders and work with member leaders to build a common agenda. It was a true test of IAF organizing principles. A test that BUILD passed. In 1994 BUILD got Baltimore to pass the nation’s first Living Wage law, creating a model soon followed across the nation.

Graf’s success in multiple cities brought him to the attention of the then-head of the British Labor Party. The Party retained Graf to help it rebuild its base. Graf soon reached a critical conclusion: the Labor Party’s “organizers” didn’t really do much organizing. Instead, they convened meetings of the already committed, which is different from reaching out to new people to expand the Party’s base. I don’t want to give away what happened with Graf in England but I his experience confirmed what many working on American elections often see: electoral success via grassroots organizing does not necessarily lead this effective electoral outreach model to be expanded to larger jurisdictions.

Graf does not address the future of the IAF and faith-based organizing as their universal organizing principles apply to all organizing models. But one cannot read Lessons Learned without regretting the decline of opportunities for today’s young organizers to learn the trade. The Catholic Church-connected entities that financially supported IAF, Gamaliel and other organizing networks lack the resources for social action they had during much of Graf’s career. The model of connecting churches in a social action organization also requires a level of church membership that is now harder to achieve.

Graf’s religious leaders also played key roles in building and strategizing for community organizations. Today’s social movements seem less inclined to support any notion of “leaders,” and rely on a less disciplined approach than Graff describes with the IAF.

Graf achieves his goal of showing the power of true community organizing. His lessons apply to all communities seeking to build power. I encourage all those who consider themselves organizers to read Lessons Learned; you will learn a lot that will build your own skills and those with whom you are organizing.

Randy Shaw’s most recent book is Generation Priced Out: Who Gets to Live in the New Urban America (UC Press 2020)