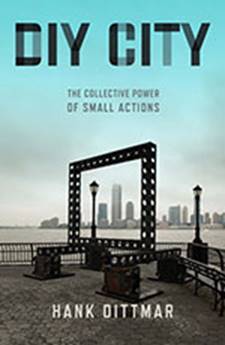 “Since World War II, a thicket of public-sector regulations and private-sector financial requirements have grown up around neighborhood zoning, parking requirements and rehabilitating older structures. Virtually every aspect of these systems that govern urban development privileges the big projects and burdens the small ones”—Hank Dittmar, DIY City, p. 129

I bet nearly everyone reading the above sentences agrees with Hank Dittmar. And most readers of his new book—DIY City: The Collective Power of Small Actions—will value his prescriptions for urban America. Dittmar died in 2018 while working on the book but his strategies for cities are even more timely in the new world of COVID-19.

Dittmar’s long experience in planning began in the mid-1980’s when the city’s pro-tenant progressive government appointed him director of the Santa Monica Airport. To its credit Santa Monica wanted to close the airport and build housing on the site; its plans were stopped by a federal lawsuit requiring the site to remain an airport. The city was allowed to develop 43 acres of non-airport uses. Dittmar’s  transformation of a large airport hanger into a incubator for small businesses instilled him in a belief in small-scale, do it yourself revitalization that continued through his life.

The airport—now set to close in 2028—offers a great opportunity for affordable and middle-class housing in an extremely high housing cost city. Yet current plans are to turn the huge site into a park, with little to no housing. It’s a very different vision from the progressive Santa Monica government of the 1970’s and 80’s that sought to build housing on the site but was ultimately stopped by voters. An early example of homeowners using their political clout to make housing less affordable and their own homes more valuable by restricting supply.

Dittmar offers examples of what he calls “lean urbanism” in a broad range of cities including Detroit, London, and Trench Town, a neighborhood in Jamaica. He makes a convincing  case for the wide applicability of his strategies.

“Slack is a Good Thing”

In talking about the Austin chapter of my book, Generation Priced Out, I always ask if people recall the 1991 film, Slacker. I describe how a film about part-time workers in Austin working on art and other ventures could not be made today because slackers can no longer afford to live in the city. Dittmar also sees a broader message in Austin’s slacker culture. He lauds slacking for offering “the space to experiment, the room to grow, and the ability to do so without a venture capital angel, a deal with a media company, or a trust fund.”

Dittmar was friends with Slacker Director Richard Linklater and discusses with him the virtue of slacking. Central to slacking is that people do not need fulltime jobs to pay the rent; the extra time becomes space for innovation. Younger people may think I’m fantasizing but San Francisco, New York City, Los Angeles and other now high-priced cities were filled with part-time workers through the 1980’s. Many in San Francisco worked on political issues, which why the 1980’s was such an activist decade in the city.

Dittmar recognizes current housing market realities are much different. He still offers a thoughtful prescription of how slackness can still benefit cities. He shares my book’s urging of cities not to sell off public land for high end development;  I favor prioritizing this land for affordable housing while he sees it as creating opportunities for innovative small businesses to operate on affordable leases. Both make a lot more sense that selling off parcels to the highest bidder so that the revenue can supposedly serve a better social purpose elsewhere

Dittmar’s 156-page, photo filled book mirrors his core faith in “making small happen.” It is chock full of ideas that befits Dittmar’s long career working on revitalization strategies. As cities face unprecedented economic challenges due to COVID-19, Dittmar’s strategies are even more worth reading about.

Randy Shaw’s Generation Priced Out: Who Gets to Live in the New Urban America is now out in paperback with a new preface.