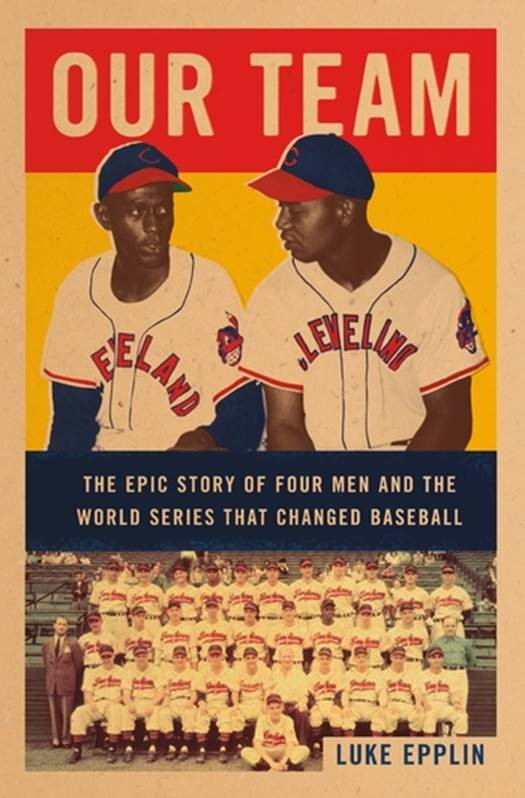 Larry Doby’s story as the American League’s first Black player is little known. Doby joined the Cleveland Indians only months after Robinson started with the Dodgers. Doby confronted a more brutal racial landscape, both among his teammates and fans. Baseball’s response to Doby proved more reflective of national attitudes toward racial justice but his story has been largely untold.

Until now. Luke Epplin’s Our Team: The Epic Story of Four Men and the World Series That Changed Baseball, uncovers the lost history of what has been deemed “baseball’s great experiment.” Told through the experiences of Bob Feller, Bill Veeck, Satchel Paige and Doby, the latter’s story will prove a revelation to most readers.

Veeck has a legendary memoir, Veeck—as in Wreck, Paige is featured in multiple biographies, and Feller was the most media-covered baseball star of his time. But Doby’s story is far less known. Epplin’s book offers rare insights into all of four figures and his sections on Doby fill a critical gap in baseball and American history.

In 1946, Bill Veeck purchased a Cleveland Indians team that had not reached a World Series since 1920.  He saw the quickest approach toward winning in acquiring Black players still stuck in the Negro Leagues by baseball’s racial ban. Major League Baseball maintained the fiction that Black players were simply not good enough to join the major leagues; reading such statements from Commissioner Landis and the publisher of the Sporting News in the current moment is jarring (I subscribed to that publication in my youth not knowing its racist past).

Larry Doby was a multi-sport star who reflected the speed, defense and all-round athleticism that soon became personified in the New York Giants’ Willie Mays. Signed by the Indians mid-way through the 1947 season, Doby was kept on the bench for nearly the entire last two months of the season. With no teammates reaching out to him and having to stay in a separate “Blacks only” hotel, Doby faced a very lonely existence. His acute isolation and second-class treatment negatively impacted his performance, yet his early problems at the plate and in the field were viewed as evidence that Black players couldn’t excel in the majors.

Veeck also felt the Indians needed pitching help. That led him to sign the legendary Satchel Paige. Paige was 42 in 1948 and many attacked his signing as a publicity move. But Epplin shows that the Indians do not reach the 1948 World Series without him.

Paige and Doby were both Black, but were otherwise as different as two players could be. I’ve reviewed Larry Tye’s and Averell “Ace” Smith’s books on Paige and Epplin offers additional insights into his character. I had the extraordinarily lucky opportunity to meet Paige as he was about to board an oldtimers’ game bus to Angel’s Stadium in 1971. The more I read about Paige the stronger the case for him being the greatest pitcher ever.

I was never a fan of Bob Feller. Epplin does the near impossible and generates reader sympathy for a player who once was America’s most popular. Epplin does not shy away from exposing Feller as a racist hypocrite; Paige routinely outdueled him in barnstormer games yet Feller insisted Blacks weren’t good enough for the major leagues.

But Feller put his life and career on the line in serving on the front lines in WW2. For all of his selfishness, he rose to this challenge.

Did the 1948 World Series Change Baseball?

Our Team’s focus on the racial politics of the 1946-48 baseball era transcends its status as a baseball  book. It’s still painful to read that after America fought a world war for freedom and democracy that it allowed virtual nationwide discrimination against Blacks in public accommodations. This segregation and discrimination was not limited to the South.

But the book’s subtitle—-that these four men and the 1948 World Series “changed baseball”—is refuted by its epilogue. Jackie Robinson and Larry Doby were “great Black role models” for white America but their success did not encourage other major league baseball teams to sign Black players. White owners preferred losing, and Black players remained uncommon across the league until the 1960’s. Those  signed through the early 1950’s were disproportionately superstars.

Nor, as we know all too well today, did Robinson and Doby change America’s systemic racism. Fans cheering Black athletes on athletic fields still did not want them living in their neighborhoods, as Doby learned in New Jersey and Willie Mays later learned in San Francisco.

Luke Epplin captures an historic moment when people like Bill Veeck really believed they could increase racial justice in America by integrating Major League Baseball. Veeck and all those who sacrificed mightily for that dream deserve our tribute. Our Team tells a story that all Americans should know, and that baseball fans will particularly enjoy reading.