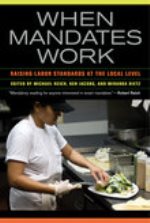 It may surprise some local progressives who believe corporate interests always call the shots in San Francisco, but the city has the most progressive worker benefits in the United States. It has a $10.74 local minimum wage, paid sick leave, a living wage law for those doing business with the city, a local health care law, domestic partner benefits and much more. Conservatives claim these benefits hurt rather than help workers. A new book edited by Michael Reich, Ken Jacobs and Miranda Dietz, When Mandates Work: Raising Labor Standards At the Local Level, conclusively refutes such arguments.

As local and state governments plan on moving forward to address rising inequality, San Francisco has long been the model for such action. But the combination of east coast media bias and the framing of San Francisco as “quirky” rather than substantive have left many unaware of the city’s path breaking leadership in raising labor standards. That’s why When Mandates Work should prove so helpful. Cities seeking to adopt similar measures need to know San Francisco’s experience, and that such laws have proved effective.

Most San Francisco activists are likely aware of the city’s many mandates, particularly because so many emerged not from politicians but from the grassroots. While the book does not credit these activists—preferring to focus on the mandates themselves—it’s worth noting that John Eller, formerly of ACORN and now with ACCE, was a driving force behind two of the issues described in the book: the local minimum wage increase in November 2003 and the Hunters Point Shipyard and Candlestick Point Community Benefits Agreement in May 2008.

Similarly, the landmark and truly historic paid sick leave ballot measure passed by San Francisco voters in November 2006 would never have happened without the leadership of Sara Flocks and Sonya Mehta of Young Workers United. Flocks is now the public policy coordinator at the California Labor Federation, and Mehta is an employment and civil rights attorney in Oakland.

Vicky Lovell’s chapter on universal paid sick leave embodies the book’s importance as a resource for activists pursuing such mandates. The chapter is chock full of tables and data addressing all of the core arguments surrounding such policies. This includes a detailed breakdown on the impact of the city law on private paid sick leave policies (only 1 in 8 employers found the law “very difficult” to understand or to comply with; the benefits to employers and workers; and the extent to which workers used the city-mandated paid sick days (more than one-third of workers used no paid sick days in the year prior to a 2010 survey).

In order to make the economic case buttressing progressive worker benefit policies, the authors understandably rely on charts, tables, bar graphs, and the like. This approach is essential, but it does make the book slow going for those not well versed in economics. The book appears designed for those in city, county and state budget offices, rather than for the lay reader interested in learning about the importance of increasing worker benefits.

I finished this book as much of the media erroneously reported on a Congressional Budget Office study that allegedly found ObamaCare would cost 2 million jobs. The story quickly became a “case closed” for the right-wing media world, who repeated the false report even after most of the media—-though not FOX News–issued a correction. The CBO report clearly stated that it was not talking about a rise in unemployment, but rather a reduction in the workforce by reducing the number of people staying in bad jobs out of a need for health insurance.

Such intentional misrepresentation of a fact is commonplace in conservative politics today. When it comes to opponents of ObamaCare, like those opposed to raising the minimum wage, paid sick leave and other mandates in the book, facts simply do not matter. If these measures really hurt workers than the conservative opposition would be all in favor of them.

That’s why When Mandates Work is likely to have its greatest impact in liberal cities and blue states where facts usually do matter. It will provide reassurance to those in the business community that worker benefits will improve rather than hurt the workplace. By helping other cities to pass such laws, the authors of When Mandates Work have performed a great public service that should pay dividends to workers across the nation in the years ahead.

Randy Shaw is Editor of Beyond Chron. He discusses minimum wage campaigns in his new book, The Activist’s Handbook, 2nd ed.: Winning Social Change in the 21st Century