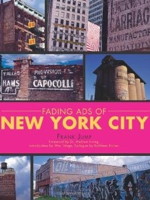 I have always loved the sight of old painted advertising signs on the sides of buildings. Such murals bring history alive, revealing once popular but now forgotten cultural products. In 1997, Frank Jump decided to begin photographing New York City’s fading advertising murals. Jump made photographing old murals his life work after being diagnosed in 1986 as HIV-positive. He was 26. He became an activist with ACT-UP and, feeling his life would be cut short, felt a powerful sense of urgency to record these murals before both he and they were gone. Thankfully, Jump survived his illness and remains in good health to this day. He has included 72 of his classic sign photos in his new book, Fading Ads of New York City. It is a book that anyone interested in the archaeology of urban America will want to have, and that those interested in historic signs and the products they advertised (e.g. Reckitt’s Blue,“The Purest and the Best”) will treasure.

I was not aware of Frank Jump’s fading ad blog or his groundbreaking work preserving the history of New York City advertising murals until I read a story about his new book and immediately ordered a copy. It becomes clear after only a few pages that Frank Jump has made an extraordinary contribution to the legacy of urban America. It also becomes clear that his testing positive for HIV spurred him to seek out fading ads as a metaphor for what he thought would soon be his own prematurely faded out life; his personal story adds a poignancy to his project.

Thanks to the lead paint that kept these old advertisements from entirely fading, New York City and other cities have a collection of signs – literally – pointing to their cultural heritage. Standard history texts do not explain the popular demand for “Omega Oil, For Sun Burn For Weak Backs For Stiff Joints For Sore Muscles,” a 1910 ad which in 1997 was photographed by Jump at its Harlem location. Omega sounds like quite a product –part of a long line of goods promising miracle cures to common ills.

Jump’s book provides the background on Omega and other products that add to our understanding of the photo. He explains why ads dealing with “regularity” were so popular in the early 1900’s that products like “Syrup of Figs” and “Fletcher’s Castoria” were frequently advertised on the sides of brick buildings.

While many of the ads are in fact fading, others, like the Seely Shoulder Shapes ad from West 40th Street in Manhattan, were painted in the 1950’s and still look great. While shoulder shapes or pads may even be more popular today, they are no longer made at the West 40th Street address where the sign was photographed in 1997.

If you are flipping through the book, you may wonder how Jump was able to take many of the photos. It turns out that through a combination of his anticipated short life span and his own personal courage, Jump sometimes took photos in areas that were “off limits” to the general public. If Jump saw a mural he wanted to photograph, it appears nothing got in his way, including risks to his personal safety. If he missed any photo due to not being able to get on a roof or gain entry to a building barring public access, it is not mentioned.

As a result, Jump photographed murals that would have otherwise not survived in any form. Such is his passionate devotion to preserving New York City’s cultural legacy.

To my surprise, Jump does not favor restoring faded signs. He believes that, like people, they have a life expectancy that should be allowed to expire. He does not argue against restoration, and looking at the photos in his book I wished many had been restored. Our Uptown Tenderloin organization got city funding to restore some great old Tenderloin advertising murals in 2011, and they really add to the neighborhood’s historic character. The restored flapjack ad on the side of the Victoria Theater on 16th Street in the Mission does the same, really bringing the past to life.

Restoring historic murals, however, is different from creating entirely new ads that are designed to appear to be old. Jump was forced to backtrack when his photo of a Planters Peanuts Ad (“Always Fresh!) turned out to have been painted in 1985 for the movie Brighton Beach Memoirs!, which sought to recreate 1930’s New York City.

Jump is deeply interested in why people care about these old advertising signs and what they signify to today’s world. He examines Gloria Steinem’s view that “nostalgia is a form of obstructionism,” and does not bemoan the ongoing development in New York City that often leads to the demolition of buildings with historic murals. He also notes the increasing popularity for hand-painted building signs, and what this signifies culturally.

So while Jump’s book can enjoyed based be entirely on the photos – and this review can only mention a few of the outstanding murals included – it is ultimately a profound rumination on the nature of once vigorous advertising signs and vigorous lives that also fade over time. Jump’s life and work have clearly been shaped by his early diagnosis of HIV, and has resulted in a book that is an instant classic.