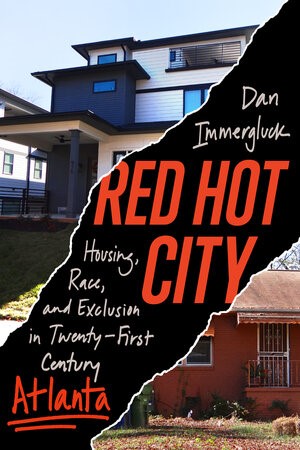 How did gentrification, displacement and racial and class exclusion occur in urban America? The common belief that these outcomes were driven by “the market” began being refuted in Robert Caro’s The Power Broker and Chester Hartman’s Yerba Buena Land Grab, both published in 1974. The books detailed how local governments in New York City and San Francisco funded and actively promoted gentrification and displacement. An avalanche of books and articles on the gentrification process in cities across the United States have since followed.

But as the author of one of those books (Generation Priced Out) I am sure I share the view of my fellow authors that our goal was to stop cities from engaging in these destructive and elitist practices. Yet it appears from Dan Immergluck’s powerful but depressing new book, Red Hot City: Housing, Race and Exclusion in Twenty-First Century Atlanta, that at least one major American city has applied all of the wrong lessons.

Immergluck provides a case study of everything a city can do to worsen affordability. While many saw government-funded displacement in New York City,  San Francisco, Chicago and other cities as cautionary tales, Atlanta stakeholders used these examples as a roadmap for promoting gentrification and displacement in their own city.

Atlanta’s future was profoundly shaped by its winning the ability to host the 1996 Olympics. This became part of Atlanta’s all out push to prove itself a “world class city.” This meant adopting policies that sought to attract middle and upper class white residents while displacing low-income Blacks. The Olympics coincided with President Clinton’s enactment of the disastrous Hope V1 strategy for public housing. This law gave federal money to cities to tear down public housing with no requirement that very low-income residents return to the new housing that would be built.

Immergluck shows that despite the Olympics and steep demographic shifts increasing white residents, Atlanta officials still act like the city’s desired demographic is still “shrinking.” As he writes, “from 2012 to 2019 the city shifted from being a majority black to a majority non-Black city…from 1990 to t0 2019 the city went from being two-thirds Black to less than half Black with the trends pointing to an even small Black share in the future.”

As residents recognized the city’s worsening affordability crisis, politicians responded. In the 2017 Atlanta mayor’s race, subsequent winner Keisha Lance Bottoms pledged to raise $1 billion in new affordable housing funds, half from the government. But the city did not release its “One Atlanta Affordable Housing Action Plan” until June 2019. And rather than including the $500 million in new funds Bottoms pledged to raise, the Plan included existing federal and state housing funding.

In other words, Bottoms used concern over affordable housing funding to gain votes. Once elected, she did virtually nothing to raise new money to address the crisis. She continued a long Atlanta tradition of mayors talking about affordable housing while pushing policies that either removed or failed to build it.

Atlanta’s affordability problems are worsened by a state government long under Republican control. But it was Democratic mayors and their political allies whose land use agenda focused on attracting more affluent residents while displacing the working-class. Atlanta’s “private-public” partnerships were effectively government serving private interests; Immergluck offers dozens of examples of opportunities to expand affordability that the city purposely avoided. Among the most egregious was the city’s failure to landbank low-priced land for future affordable housing. It reminded me what a powerful difference the Urban Land Conservancy has made in Metro Denver. Atlanta badly needs a nonprofit committed to a land-banking strategy.

I did not include Atlanta in the over dozen “blue” cities with problematic housing policies I write about in Generation Priced Out. In fact, I know of no books on gentrification that discuss Southern cities like Nashville, Charlotte, or the many others facing challenges similar to Atlanta (New Orleans is the exception).

That’s what makes Red Hot City such an important book. Residents of cities who are either in the midst of what happened in Atlanta or close to a housing boom happening need to learn how to avoid Atlanta’s failures. One reason resistance in Atlanta lacked the strength demonstrated in many northern cities was the suddenness of the market shift took many by surprise. Readers of Red Hot City will not be surprised, and can start preparing to protect and expand their city’s affordable housing stock before it is too late.