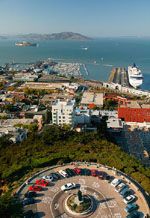 There were smiles all around as the Broadway Family Apartments project, five years in the making, formally broke ground Thursday in a ceremony at Battery and Broadway Streets. The project will bring a much-needed wave of affordable housing to the Historic Northeastern Waterfront District: all 81 units will be affordable to those earning less than 60% of the Area Median Income; 20 of these units will be classified as Section 8 housing.

“It’s a great day,” said Thaian Ngo, Project Manager at the Chinatown Community Development Center (CCDC), one of the project’s prime sponsors. The facility introduces “one of the first residential developments in this area in 20 years,” she added.

The site was formerly an offramp for the old Embarcadero Freeway, which was demolished after the 1989 Loma Prieta earthquake. San Francisco subsequently acquired the property, and ten years later, the Board of Supervisors passed a resolution to consider it as a place to develop affordable housing. The Mayor’s Office of Housing ultimately chose the CCDC to develop the site.

Ngo says the $24 million project succeeded because the city collaborated effectively with business sponsors, the local community, and CCDC. “It was definitely a communal effort,” she said.

The project’s funding came from various sources, including government offices such as the California Department of Housing and Community Development and private donors such as Wells Fargo.

Housing activists differ in their assessments of the project. Some say the approval process was unnecessarily lengthened by wealthy locals who opposed the introduction of affordable ‘family’ housing because of racial and class stereotypes. They also claim that the City’s mediation process encouraged such delaying tactics by permitting repeated appeals.

Other activists are wary of the ‘affordability’ promises that have been broken so many times before. One longtime low-income housing advocate notes that 60% of AMI often just barely excludes people making minimum wage or receiving SSI; the ‘affordability’ goal, therefore, may leave out some of the city’s neediest citizens.

The project will offer 23 efficiency, 24 two-bedroom, and 34 three-bedroom units. The finished site will include a community center, a 4,000 square foot childcare facility, and roughly 2,000 square feet of retail space on Broadway.

Construction is scheduled for Fall 2005, and CCDC aims to move in tenants by Fall 2007.