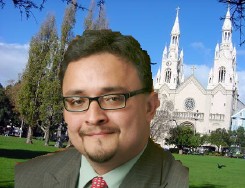 I think San Francisco Chronicle columnist C.W. Nevius wants to improve San Francisco, but his frequent departures from logic, common sense, and the reality world undermine the causes he supports. Case in point: his June 10 column where he claims that the Police need “sit and lie” legislation to arrest someone who allows his pit bull to assault people and pets in North Beach’s Washington Square Park. After quoting Supervisor David Campos’ argument that “the case for the legislation simply has not been made,” Nevius says: “Tell that to the residents who have stopped coming to the park. Or those who follow the safety in numbers rule.” Nevius appears to have forgotten acknowledging a few sentences earlier that “sit/lie may not solve the problem here – it is a public park,” and then falsely portrays Campos as turning his back on public safety.

I visited Washington Square Park this week, expecting to see one of my favorite places transformed into what C.W. Nevius described as a desolate home for violent thugs and dangerous dogs. But the park was well populated, and no pit bulls or belligerent drunks were in sight despite the Board of Supervisor’s rejection of sit/lie legislation last week.

Now it may be that Nevius’ June 10 column spurred the SFPD to address the Park’s problems, so that the scene I viewed was completely different than the place “where residents have stopped coming.” But this would only confirm that a sit/lie law was not needed to solve the Park’s problems.

In Nevius’ world, progressives cause all of San Francisco’s problems. He has written innumerable columns attacking Chris Daly, knowing how popular such pieces are with those submitting comments on sfgate.com.

Nevius has also regularly attacked progressive leader Aaron Peskin. And when it came to unfairly blaming Peskin for North Beach’s vacant Pagoda Theater, Nevius even went so far as to criticize Peskin’s wife.

With Peskin off the Board and Daly soon leaving, Nevius appears to have shifted his focus to Supervisor David Campos. Knowing both men, it is clear they are not a good match: Campos is a Harvard-trained attorney who believes in facts and cause and effect, Nevius is a columnist who does not allow facts or issues of causation to interfere with his “big picture” argument.

Frustrated by police inaction at Washington Square Park but politically unable to criticize Police Chief Gascon (Gascon is doing a great job but he is not always right), and also angry at the Board’s defeat of sit/lie (which means they were not swayed by Nevius’ advocacy), the columnist used his podium to knowingly misrepresent David Campos’ approach to violent crime.

In saying that “the case for the sit/lie legislation had not been made,” Campos in no way implied that police should not arrest people who sic pit bulls on others. In fact, I spoke to Campos and he was furious than anyone should suspect him of tolerating such conduct.

Nor did Campos ever dispute the notion of “safety in numbers,” a charge Nevius also raised against him. This allegation has the additional problem of having nothing to do with the sit/lie law.

In fact, Nevius’ ill motive toward Campos is revealed when he acknowledges that “sit/lie might not solve the problem” at the Park, since parks are places where people are allowed to sit and lie. Nevius clearly wanted to associate the progressive Campos with the outrageous violence allegedly occurring in the Park, regardless of the unfairness of the linkage.

Undermining His Own Goals

Nevius has not helped the sit/lie cause by claiming it is needed to stop violent predators.

I understand why Haight-Ashbury residents want to be able to walk down sidewalks without being yelled at by belligerent young people sitting in front of businesses. But this has nothing to do with threatening, assaulting or harassing people in a public park, offenses that already give police the right to intercede.

Had Nevius acted as a reporter searching out facts, he would have observed how Supervisor Bevan Dufty was inclined to support sit/lie until testimony showed him that, as Campos described, “the case for the sit/lie legislation had not been made.” Yet Nevius wrongfully juxtaposed Dufty’s claim that “nothing happens” with most citations, with the completely unrelated and erroneous conclusion that this means that violent park predators go “unpunished.”

If such predators are going free, Nevius needs to discuss this with Gascon and District Attorney Kamala Harris. Instead, he blames David Campos, who has no legal authority as a Supervisor to decide which criminal cases are prosecuted.

Further, Nevius has created a terrible image for the North Beach businesses that he wrongly claims have been victimized by Peskin and his progressive allies.

Why visit Washington Square Park if it means risking attack by a pit bull? And those deterred are likely to seek out another neighborhood entirely, and buy their food, coffee and other goods outside North Beach.

Nevius is such an anti-progressive partisan booster that he even posted his own recommended slate for the Democratic County Central Committee. And we all know that if he had endorsed the progressive slate, Chronicle editors would already have removed him from writing columns about San Francisco.

Randy Shaw is the editor of Beyond Chron.