Netroots Anxious On Health Care, But Action Gets Results 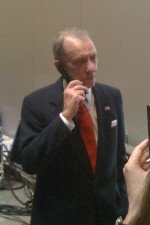 Health care reform dominated Netroots Nation this weekend – as liberal bloggers who elected President Barack Obama are growing nervous and impatient. Passing a bill this year is essential, but it’s crucial to have a “public option” – and news from Washington is enough to make anyone angry. But the bloggers underestimate their power if they just complain and not organize, and we saw at the Convention how action gets results. White House adviser Valerie Jarrett – for the first time – implied that the President’s push for “bipartisan” support was more about reaching out to the American people, rather than Republican politicians. A panel of organizers from various groups on Saturday explained how to use online tools to affect the health care debate. And bloggers successfully got Pennsylvania Senator Arlen Specter – who is facing a Democratic primary challenger next year – to call one of his Senate G.O.P. colleagues, and tell him to stop lying about “death panels.” Specter will have a tough time winning because of where he has stood on the federal stimulus and the flat tax, but that small episode showed the netroots can pro-actively move the issue. During August while Congress is on recess, bloggers must lead the charge – rather than react to whatever they hear on the Sunday talk shows.

The Mistake of Dropping Single-Payer

Netroots Nation was swarming with supporters of “single-payer” health care, pushing for HR 676 by Congressmember John Conyers. House Speaker Nancy Pelosi has promised that Congress will get a chance to vote on this bill after the August recess, but it is not expected to pass – and is instead designed to push the debate on universal health care. Even if we end up with just a “public option,” asking for more is the smart approach.

At a Friday morning forum on health care, Howard Dean agreed when asked if it was a mistake for Congress not to start with single-payer. “This was a hangover from the old Democratic Party,” he said. “They thought that by taking single-payer off the table, we would have a serious debate. But we don’t have a serious debate – we have a shouting match, because the other side was never interested … [By dropping single payer], we have already made our compromises and there will be no compromises in this bill.”

Some conservative Democrats – such as North Dakota Senator Kent Conrad – have been pushing health care “co-ops” rather than a public option, but Dean effectively explained why this was unacceptable. “This is a political compromise, not a policy compromise,” he said. “They’re too small, and can’t do any good. We tried it before with Blue Cross / Blue Shield – and they end up behaving exactly like the insurance industries.” Dean said he was optimistic that eventually we would pass a public option bill – if we held firm.

Work With – Not Against – Obama White House

But there was no shortage of skepticism about whether the White House will stick with a public option, and bloggers hit Obama adviser Valerie Jarrett with hard questions. Jarrett would not say if the President would veto any bill that lacks a strong public option, or if he would threaten federal funding for Blue Dog Democrats that were making it difficult. “I know there is a lot of frustration,” she said, “but the President is counting on the American people to put pressure on their elected officials.” And by “pressure,” she made it clear that it also includes putting pressure from the left on the White House.

Yesterday’s news that Health & Human Services Secretary Kathleen Sebelius told CNN that a public option was not an “essential element” got the blogosphere furious – but it’s now become clear that she misspoke. The traditional media is hostile to a public option approach (even though over 70% of Americans support it), so it’s up to liberal activists to cut through the garbage on the Sunday talk shows and build a new political reality.

But for activists who feel that the President should do more, Jarrett offered a subtle hint to the crowd that bloggers should seize upon to advance the debate. Because the G.O.P. has shown no interest in a bipartisan solution for universal health care, they asked, why is Obama even trying to placate them? Jarrett replied that “bipartisan” is not about reaching out to Republican politicians, but reaching out to the American people. “That’s why the President was in Montana,” she explained, and is holding a town hall in Colorado. In other words, health care activists must reach out to Republican voters who support us.

One downside of the blogosphere is that you get a lot of liberals who have never been involved in political organizing suddenly become prominent voices – and these are the ones who cry “betrayal” whenever the Obama White House suggests it is going to cave. But the netroots is not about just building a progressive echo chamber in the media – it is about building a grassroots presence online to push Democrats to hold firm. Bloggers with organizing experience understand this, and are taking a constructive approach.

At a Saturday panel shortly after Jarrett’s speech, online organizers from Obama’s Organizing for America, Howard Dean’s Democracy for America, Families USA and Health Care for America Now explained what they’re doing for the August recess – and how liberal bloggers can get involved.

“An important element for us is peer-to-peer contact,” said OFA’s Ben Brandzel – to dispel some of the lies disseminated about the health care proposal. Charles Chamberlain of DFA said their role is to play “bad cop” in the process. “Republicans don’t matter in this debate,” he said. “We need to get to Democrats who have had screamers at their Town Halls – and let them know there are repercussions on both sides.” DFA has been targeting conservative Democrats who have been wavering, by running ads in their states.

I was surprised that Julia Eisman of Families USA touted how many letters to the editor had been sent in favor of health care reform – given that it struck me as a less effective “old school” approach. But Eisman explained that the target of this campaign is not the public as a whole, but legislators who need to stay firm. “Letters to the Editor can target the issue very locally. It’s important to still use the mainstream media, because that’s how members of Congress will be taking the pulse of their community.”

Each website from these four groups has an “August tool kit” in how online activists can get involved – in order to keep the public option a critical element of the health care bill.

The Conference also featured a live conversation with Pennsylvania Senator Arlen Specter – who recently became a Democrat – and his primary challenger, Joe Sestak. Netroots Nation was not a friendly audience for Specter, but some of the questions were targeted at taking advantage of his need to get liberal support for re-election. Specter said he had been to more health care town hall meetings than any other Democratic Senator, and that he could help get Republican Senate colleagues Chuck Grassley, Susan Collins, George Voinovich and Olympia Snowe to support the President’s health care proposal.

But Grassley had just repeated the lie in that morning’s New York Times about “death panels” – and when Specter was asked about it, he said he would “call up Chuck Grassley today” to resolve the situation. This prompted myself and other bloggers to shout “call him now!” – as we took out our cell phones and held them up. Specter then invited us backstage to watch him call Senator Grassley, which we all followed up on.

With a challenge from Congressman Sestak, Specter must desperately prove progressive credentials – and this small episode shows how liberal bloggers can use pressure points to advance the health care debate. After confronting Senator Grassley, two days later he was criticizing Utah Senator Orrin Hatch for also lying about health care reform. But Specter will have a tough time winning re-election as a Democrat, because his years as a Republican Senator leave him with a lot of explaining to do.

I asked Senator Specter if he still supports a regressive “flat tax” – where all Americans pay 20% of their income each year. This was part of his campaign platform in 1996 when he ran for President, and in 2008, he held town halls with Grover Norquist to support it. As recently as one month before switching parties, he re-introduced the flat tax as legislation in the Senate. “I will have to look at it based upon how much money we are spending on the federal stimulus,” he said, “and how much we are spending on climate change.”

That answer will only make things worse for him. Specter repeatedly took credit during the forum about being the “decisive” vote for the federal stimulus – although he played a role in cutting it substantially. Specter’s own state of Pennsylvania lost about $1.7 billion after he insisted on cuts to the federal stimulus, at a time when the state faced about the same – $1.7 billion – in cuts to social programs. If Pennsylvania bloggers keep pushing this angle, national bloggers can keep getting Specter to assist in the fight for a public option for health care.