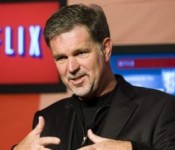 On March 4th, 2014, Billionaire Netflix CEO, Reed Hastings delivered the keynote speech to the California Charter School Association’s annual conference. In that keynote speech, Mr. Hastings made a shocking statement: Democratically elected school board members are the problem with education, and they must be replaced by privately held corporations in the next 20-30 years.

Reed Hastings has just over a billion dollars, riches built on software companies and the entertainment giant Netflix. Mr. Hastings also sat on the California State Board of Education from 2000 to 2004, when he stepped down amid controversy.

Hastings, who sits on Rocketship’s national strategy advisory board, has invested millions in Rocketship. He’s also made significant political action committee contributions on Rocketship’s behalf, most recently, he poured $50,000 into a PAC to support pro-charter Santa Clara County Office of Education members.

Mr. Hastings’s vision of the bourgeoisie controlling education is, frankly, frightening. We fear a system controlled by out of touch billionaires who subordinate and subvert the masses through Hastings’s “large non-profits”.

As Winston Churchill said, “Democracy is the worst form of government, except for all those other forms”. Note to Mr. Hastings: Aristocracy and Oligarchy have been tried plenty of times, our predecessors got on a boat to escape them. We don’t want our progeny to have to do the same.

“And so the fundamental problem with school districts is not their fault, thefundamental problem is that they don’t get to control their boards and the importance of the charter school movement is to evolve America from a system where governance is constantly changing and you can’t do long term planning to a system of large non-profits…The most important thing is that they constantly get better every year they’re getting better because they have stable governance — they don’t have an elected school board. And that’s a real tough issue. Now if we go to the general public and we say, “Here’s an argument why you should get rid of school boards” of course no one’s going to go for that. School boards have been an iconic part of America for 200 years. So what we have to do is to work with school districts to grow steadily, and the work ahead is really hard because we’re at 8% of students in California, whereas in New Orleans they’re at 90%, so we have a lot of catchup to do…So what we have to do is continue to grow and grow… It’s going to take 20-30 years to get to 90% of charter kids….And if we succeed over the next 20 or 30 years, that will be one of the fastest rates of change ever seen around the world for a large system, it’s hard.”