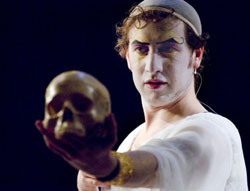 NERO NOT ONLY FIDDLES WITH HIS FIDDLE BUT HE FIDDLES WITH ANYTHING THAT MOVES, MEN AND WOMEN. ‘NERO – ANOTHER GOLDEN ROME’ AT THE MAGIC THEATER IS DARING POLITICAL THEATER. AND TO ADD TO THE DRAMA IS THE MOVING MUSIC BY DUNCAN SHIEK.

NERO IS THE FIRST PLAY OF THE ‘HOTHOUSE’ SERIES AT THE MAGIC – and it is daring indeed. The sets are not really sets but props. There are ladders to climb that can become a hill or stairs. A moving ladder cart becomes a chariot and to add some royalty to it all there are hanging chandeliers ala ‘Phantom’ and sand on some of the stage to bring the earth into it.

Drew Hirschfield plays a young narcisstic Nero, who rises to power on the bosom of his pushy, political hack mother. Everyone gets rolled over the burning coals of Rome, including Chaucer, Seneca, John Milton and the Bush’s. This vision of Nero transcends all time and the characters are not always from the same century.You’ll hear bits of German, French and Greek.

The power hungry Nero of course, murders his own mother, his half brother and others to get to sit on the throne of Rome. The play is insanely directed by Beth F. Miles. And who could have directed a play better than a totally deranged person? We kid you Beth Miles – you were sensational. Nero plays through April 8. If you’re kinky like me – you’ll fiddle right along with Nero. Great acting! The singing was weak at times – but I can see this “Nero” settling down to an off-Broadway gig.

A NEW DAY IS DAWNING with “Cats” at the Orpheum. This is the 25th year anniversary touring show – and wow! …have they changed things. There is an added Tap Dancing Number and a great funny fantasy number with Siamese cats. There are many new additions to the musical, which is holding up pretty well considering that it is 25-years old. The Actors (who play cats) and the singers (who are the cats) are all fantastic. I heard one of the best renditions of “Memory” on opening night. Yep, it’s a new day for Cats. If nothing else – you will be mesmerized by the exciting, inventive lighting. It’s a marvel. And you know what? ,,,,the kids liked it too. Even the little boys who were dressed up in their Sunday best with their little coats and ties were having a great time, as well as their sister. “Cats” is the all-American family show.

On the way out Critic Richard Croneman (Talkin’ Broadway) said to me – “I don’t remember all those numbers in the original. I wonder if Andrew Lloyd Webber knows about this.” I replied: “knowing Andrew…He’s probably in it under one of those ‘cat faces’.”

The movie “Fateless” is a sweeping look at the Holocaust through the eyes of a Hungarian Teenager who was taken off a bus and sent from one horror camp to another. Yeh, I know you’ve seen many stories about the Holocaust – but this one is definitely worth seeing. The Gorgeous Cinema Photography and the splendid acting, pulls you into that era of inhumanity.

The film starts with the 14 year old boy in Budapest who gets taken off a bus on his way home from school. He is separated from his family and his Dad, who has already gone to “Forced Labor Camp” – as they called it then. There is plenty of suffering in the movie – but luckily for the boy, there is salvation, but it is empty salvation.

“Fateless” is a movie you will not easily forget. And you can and should see it at the Opera Plaza.

TELL A FRIEND ABOUT THIS COLUMN. CLICK ON THE PODCAST, CSI GOSSIP… AT THE END OF THE COLUMN.

Hello from Englandwood. A Rich English Matron (Judi Dench) loses her husband and becomes bored – so she buys an old Theater, hires a producer and director and has quite some success. Then her success brings copycat shows. What to do…what to do? Well she comes up with this wild idea of putting on Nude shows on the stage. You can imagine how this went over during the prudish years of England. They didn’t even allow “French Postcards” in the Queens town.

Well, Dench who has plenty of contacts highup in the government gets her way. And along the way she meddles in people’s lives, falls in love with the married director and basically makes things a pretty mess. But however, along the way there is tons of fun in this movie and the great songs ala World War ll music are so splendid. Think Andrew Sisters. The photography is just swell and the costumes and sets are so pleasing that you just want to be a part of this great little theater. Dench and her cast are so delightful and funny that you just want to hug them all. Even the one’s that aren’t nude. Say, if you love Theater and Comedy and the great music of the 40’s then this certainly is for you. See it while you can because Dench is nominated for Best Actress at the Oscars. This is one of those films that have a habit of disappearing completely. Don’t wait.

CAN YOU HEAR ME NOW? YOU CAN NOW! CHECK OUT TODAY’S PODCAST. THIS CHAPTER IS CALLED “CSI – GOSSIP!
CHECK OUT THE PODCAST: CLICK HERE