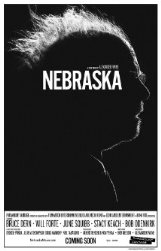 Nebraska is extremely entertaining – the performances are extraordinary and notably nuanced. This ‘dark perl’ (in black and white) is an addictive, spellbinding story – from start to finish.

Woody (Dern) received a ‘flyer’ in the mail. He reads that he’s won a million bucks. Gee, it’s so easy – he thinks. The problem is that Woody just needs to buy some magazines to see if he has the winning number. Just like buying a lotto that will never give you a million bucks.

Woody (a lifelong alcoholic) hangs around with a not so wonderful bunch of people who want a piece of him. Everyone wants a piece of the millions that are not really there. His family knows that it is all a hoax.

The movie is in black and white. Lucky for his son David – knows that the flyer is a hoax – but David continues to drive his father (Dern) around the country to please his dad.

This Black and White film is magical in Black and White. The natural elements on the screen hypnotize the audience. “Nebraska” is one of this years best films. Dern deserves an “Oscar” for both father and son as they travel from Billings, Montana to Lincoln Nebraska. The son David (Will Forte) tries to help his father Woody (Dern), struggle with dementia.

Woody’s wife is a kick in the rear. She is June Squibb and she just might end up with an Oscar. She gets enormous laughs from the audience. June thinks nothing about shouting out to her hubbie “F. You!” The musical accompaniment certainly keeps the story moving along the dusty road.

The individuality of all the characters in this superior cast bring real life to what real people do. There is plenty of dust all over the country — and that’s what happens when you live in road trip country.

The movie is sad, funny and comic. Without this marvelous cast — there would be no Nebraska. This film is the Real Deal. I think about this dark pearl over and over again. O.K. – I’ll tell you what you want to hear – It’s simply brilliant!”

I don’t have a crystal ball — but here are a few guesses: Cate Blanchett in Blue Jasmine hopes for an Oscar…Then there is of course Meryl Streep, Amy Adams, Judi Dench and maybe Sandra Bullock. I think that there is a good chance that Bruce Dern with carry heavy Gold. He’s 77 years old — lets give him the Shiny Guy. He’s old though. Christian Bale (American Hustle) could end up with everything. My hope is that “Nebraska and Bruce Dern”and Will Forte (supporting) win Gold. Hey, there doesn’t seem to be many guys – but there is Matthew McConaughey and Jared Leto (best supporting).