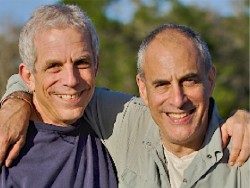 In 1980, Matt Ross participated in his first labor arbitration. He was representing HERE (now UNITE HERE) Local 2 in a case where maids (now “housekeepers”) were asking for a reduction in the number of rooms they had to prepare each day. At the time, they were required to do 16 rooms, or more than one every 30 minutes. They sought a reduction to 15. Never before had maid room counts been the subject of a labor arbitration, but Ross was one of those young idealistic attorneys not deterred by past precedent. Thanks to Ross’ advocacy, the maids prevailed, setting a precedent that has steadily reduced housekeepers burden to this day. This is one of the many reasons Ross will be honored on Saturday night as a “Champion of Justice,” along with his longtime friend, law school colleague, and fellow labor union attorney, David Weintraub.

When Matt Ross commenced working for UNITE HERE Local 2 in 1980, the union faced deep internal divisions. An insurgent campaign to oust the old guard had led to the international union placing the local in trusteeship, and protests outside Local 2’s Golden Gate headquarters were commonplace.

Ross had to chart a course that enabled him to win the trust of all factions, which could have been a daunting task for a new attorney. But he succeeded in winning legal victories for Local 2 from the outset, and he remains the union’s chief attorney to this day.

Ross’s firm, Leonard, Carder et al, represented the ILWU in its heyday, and defended ILWU leader Harry Bridges and other labor figures targeted by anti-communist attacks. It later included some of the legendary legal staff of the United Farmworkers of America. While Ross is not a UFW alumni, he and his colleagues have long followed the union’s model of attorneys staying in the background while the workers take center stage.

As a result, Ross has had one of the most successful legal careers of anyone in his field and yet his name may not be widely known. When you consider all of the cutting edge tactics that Local 2 has used – from boycotts to hard hitting public pressure campaigns to protests against hotels not currently involved in labor disputes – realize that Ross has had to evaluate their legality.

And to my knowledge his legal judgments have consistently proven correct, which is why he is so valued by UNITE HERE and why Mike Casey, its longtime President, will speak on Ross’s behalf at the National Lawyers Guild event on Saturday night.

In 2001, his case, Welch v. Oakland Unified School District established the principle that district interns are probationary employees who are entitled to a due process hearing before they can be fired before the end of the school year. And, in 2007, in CTA v. Vallejo City Unified School District, the court confirmed the distinction between classification and certification by holding that teachers may not be denied probationary status and due process rights simply because they hold less than full credentials.

Weintraub and Ross are throwbacks to the days when many young people entered law school in order to become “people’s advocates.” The sharp reductions in funding for legal services soon eliminated thousands of public interest law jobs, making it much harder for those graduating in the early 1980’s to obtain such employment.

Fortunately, activists like Weintraub and Ross have continued fighting for what’s right. In addition to Mike Casey, Beverly Tucker and Ashlee Albies will also speak at the NLG event, which also honors Megan Books with its “unsung hero” award.