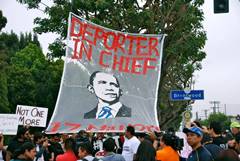 The National Council of La Raza is set to declare Obama “the deporter-in-chief” and demand that he take unilateral action to stop deportations.

“For the president, I think his legacy is at stake here,” Murguía said in an interview in advance of NCLR’s annual Capital Awards dinner, where she will deliver a speech lambasting Obama’s deportation policy. “We consider him the deportation president, or the deporter-in-chief.”

By April, Obama will have overseen more than 2 million deportations, activists say, far more than any previous president. Obama has insisted – including when he was interrupted by a protester – that Congress has tied his hands and he cannot reduce the number of people being deported unilaterally. Latino groups are planning a series of mass demonstrations April 5 to protest the deportations and force lawmakers to choose between criticizing Obama or facing a populist wrath.

Murguía said NCLR has been privately urging the White House for months to do something about deportations – which will soon number 2 million since Obama took office. The group was also using its megaphone to blame Congress and not Obama for the deportations. Just three weeks ago, NCLR called for an end “to unnecessary deportations” and asked supporters to “ask Republican leadership to take a stand for family values and pass immigration reform.”

Now that focus is being directed at the White House.

“We respectfully disagree with the president on his ability to stop unnecessary deportations,” Murguía will say during a Tuesday night speech to NCLR’s annual Capital Awards dinner, according to prepared remarks. “He can stop tearing families apart. He can stop throwing communities and businesses into chaos. He can stop turning a blind eye to the harm being done. He does have the power to stop this. Failure to act will be a shameful legacy for his presidency.”

The White House has deep ties with NCLR. Cecilia Muñoz, the director of the White House Domestic Policy Council, was NCLR’s director of research and advocacy before joining the administration. But NCLR faced pressure from its members and from other grass-roots immigration organizations that have been agitating for Obama to halt deportations.

POLITICO reported last month that NCLR and the Center for American Progress were virtually alone among progressive immigration groups in defending the White House – criticism that stung Murguía.

“There have been different times when we’ve hit the president pretty hard,” she said. “But I know not everybody agrees with that.”

Tuesday’s push, Murguía said, will be part of what she described as a “three-pronged” strategy. NCLR will continue to press Congress and aims to register 250,000 new Latino voters ahead of the November midterm elections.

“Their credibility is growing thinner and thinner by the day and people know that they did it before and I think we believe that they can do it again,” she said.

It’s not the first time NCLR has crossed Obama on deportations – though Murguía’s remarks do mark the first time NCLR’s leadership has done so in such a direct and public manner. Obama was heckled by a large portion of the crowd during a June 2011 speech to NCLR – protesters chanted “yes you can” at him to send a message that he should halt deportations.

A year later, during the midst of his reelection campaign, Obama announced deferred action for so-called Dreamers, allowing young people brought illegally to the United States as children a path to citizenship.

The White House has said it does not have authority to take a similar step again. Press secretary Jay Carney last week reiterated Obama’s position that only Congress can halt the deportations.

“The job of the executive branch is to carry out the laws that are passed by Congress,” Carney told reporters last week . “The administration has taken a series of steps to focus our resources and make immigration enforcement more strategic, including focusing on criminals and the use of deferred action for young immigrants known as Dreamers. The only permanent solution is a legislative one that would provide a broad-based path to earned citizenship, and that can only be achieved by Congress. It can’t be achieved by the president.”

Obama has gone mostly silent on immigration in recent months in an attempt to give House Republicans political space to push their own immigration reform bills. He hasn’t made a major immigration speech since November and devoted just 120 words to it during his State of the Union address in January. And the president has limited his Spanish-language media appearances to radio interviews focused on the Affordable Care Act, limiting his exposure to uncomfortable questions about deportations or the congressional immigration stalemate.

Murguía said the White House deportation policy began as an effort to win credibility among Republicans but has careened out of control. She said Obama sought to deport more people than had President George W. Bush to get Republicans to cooperate on a larger immigration reform bill – a strategy that has not worked in the House.

“I don’t think it’s lost on anyone that there may have been a strategy in place to demonstrate they were tough on deportations,” Murguía said. “Former [Homeland Security] Secretary Janet Napolitano didn’t shy away from the notion that if we can show we’re tough on deportation, we’ll be able to get some of these Republicans to come around.”

This piece first appeared in Politico