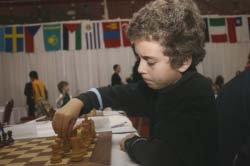 Last week, Northern California youngster Daniel Naroditsky won the under 12 division of the 2007 World Youth Chess Festival in Antalya,Turkey. Ranked #1 for his age in America for the past two years, a past national champion for K-3 and 4th grade, and the 2007 CalChess High School Champion, Naroditsky also won a bronze medal at the 2006 Pan American Youth Chess Festival. A remarkable achievement for the Foster City native and regular of San Francisco’s Mechanics Institute Library and Chess Club, the oldest in the United States.

Naroditsky finished with a remarkable score of 9.5 out of 11 against the world’s top youths in his age group. He actually tied for first place with top ranked wunderkind Illya Nyzhnyk from Ukraine, but Naroditsky had the superior tiebreaks. In addition to the gold medal, Naroditsky will receive an automatic FIDE Chess Master title for his performance.

Naroditsky began the event with five straight wins against lower rated players. In the second half of the tournament, he faced three of the top five rated players, all masters. First, he drew with top seed Nyzhnyk in round 6, then he suffered his only defeat to Ulvi Bajarani of Azerbaijan in round 8 and finally he defeated Ivan Bukavshin of Russia in the final round. Naroditsky also beat each of the other eight players that he faced.

This was not Naroditsky’s first attempt at winning the World Youth, but it certainly was his most eventful trip. He was 5th in the Under 10 competition in his international debut at Belfort 2005 while in the same Under 12 division in Batumi, Georgia last year, Naroditsky scored only 6.0 out of 11. However, the experience from previous years really paid off, especially in the final round when his higher rated opponent Ivan Bukavshin of Russia was clearly rattled by the enormous pressure of the moment. What should have been a difficult struggle ended up being an easy two hour victory.

Local chess master and writer Michael Eigner, expressed great pleasure in working with Naroditsky as one of his coaches. “His pure love for the game of chess is enormous. Danya is obviously a very strong player, so I am glad that he has Grandmasters Gregory Kaidanov and Alexander Kalinin who provide most of his instruction. Hopefully he picked up a few tidbits here and there from the many sparring contests that we have had over the past 1.5 years. The future is bright for Danya and I predict that the FM title will be just the first step to achieving even higher success in chess.”

The Bay Area has seen the rise of some very fine young chess players in recent years, many spawned from programs like the Berkeley Chess School, some top-notch local coaching and having the benefit of a resident Grandmaster at the Mechanics Institute. Here below is Naroditsky’s “gold medal” game.

Special Thanks to NM Michael Eigner, the Mechanics Institute and IM John Donaldson for the filing of this report.