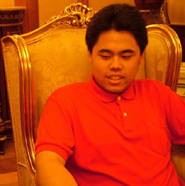 7th ranked U.S. chess player Hikaru Nakamura was eliminated by one of England’s best Grandmasters, Michael Adams, in the knockout formula of the 2004 World Chess Championship, being held in Libya. Nakamura amazingly made it to the “sweet sixteen”, an incredible feat considering his young age of 16! Adams was able to defeat Nakamura as black in 62 moves. Their second game was a draw, giving the best of two games victory to Adams.

Nakamura won the Grandmaster title last year in February, making his last GM norm in Bermuda. This year he won his last tournament in the Dominican Republic, and also played in Corus. He could have won the B-Group but missed several wins.

Nakamura started playing at 7 thanks to his step-father, chess coach Sunil Weeramantry (who by the way is a very good chess player himself), and started beating him around the age of 10-11! He used to practice 3 to 4 hours per day in the past, but given his heavy tournament commitment he can only do around 2 hours today.

Nakamura is also one of the fastest players currently in the chess world, and he is always present in the top 5 blitz players either on ICC or Playchess. Apart from this, he has a tremendous fighting spirit which allows him to persist where other people may have long given up. Calm off the board he focuses his energies for the maximum result in the game.

Nakamura doesn’t agree with Kasparov on him not playing in the World Championship. “I think this format is pretty good and it gives young players a chance to get experience at the highest levels. I think that the first couple of rounds should definitely be not more than two games. Of course some things can be changed but the main principle should be accessibility.”

His advice to kids who may want to follow in your footsteps: “To study all aspects of the game, to keep playing despite the results, to try and improve and never to get discouraged . to keep on trying”.

In 2002, I found myself sitting next to Weeramantry at a tournament here in San Francisco, as we watched Nakamura dispatch the great chess master, Nick DeFirmian. Here is the game I witnessed at the Mechanic’s Institute. Weeramantry and I smiled at each other as Nakamura played the novelty, 15. dxe6. Analysis by IM John Donaldson.