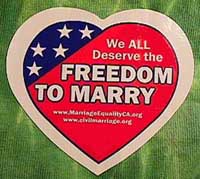 With Republicans likely to lose the House (and possibly the Senate), the media is eager to change the narrative and create another “defeat from the jaws of victory” myth about Democrats. With last week’s New Jersey court decision on same-sex marriage, some have speculated that it will drive conservatives to the polls. Already, George Bush has commented on the case and regurgitated the same tired rhetoric that frightened voters two years ago.

But while Karl Rove will certainly try, this tactic is not likely to succeed. First, anything this close to the election is too little, too late – unlike in 2004, same-sex marriage has not dominated the headlines for the past year. Second, New Jersey’s decision doesn’t mandate marriage equality – so you won’t be seeing gay and lesbian couples fly to Atlantic City between now and the Election to get married. Unlike in Massachusetts (where the state supreme court declared it unconstitutional not to have same-sex marriage), last week’s decision more closely mirrors the Vermont decision that created “civil unions” in June 2000. By a 4-3 vote, the New Jersey Supreme Court instructed the legislature either to extend marriage to same-sex couples, or else create a parallel civil unions structure that provides the same rights.

The Court took a highly conservative approach of what is a “fundamental right.” A right is only fundamental, they argued, if it is “deeply rooted in the traditions and collective conscience of our people (22).” Although marriage is a fundamental right, they said, same-sex marriage is not because it’s not “traditional.” Of course, a woman’s right to terminate her pregnancy wasn’t rooted in tradition – but the Supreme Court passed Roe v. Wade. And as the dissent points out, there wasn’t a tradition of interracial marriage when the U.S. Supreme Court ruled that anti-miscegenation laws are unconstitutional.

In the 2004 election, George Bush pledged to appoint “strict constructionists” to the courts who would interpret the Constitution with a traditional lens. Here, the New Jersey court refused to recognize gay marriage as a right because it “could not have been imagined” by the original Framers of the state constitution (27-28). This is the same approach that conservative Justices like Scalia often take – if the Founding Fathers couldn’t have imagined it, it’s not a fundamental right worth protecting.

But what’s more interesting is how the Court treated the “equal protection” claim. The Court squarely addressed it as a question of discrimination based on sexual orientation – gay and lesbian couples are discriminated against because they do not have the full legal rights of marriage. And unlike the New York decision (which argued that because only straight people can accidentally have children, it’s okay to deny full marriage rights to others), the New Jersey court concluded that there is “no rational basis” to put committed same-sex couples at a distinct disadvantage.

New Jersey already has Domestic Partnership for same-sex couples, but the Court found it unconstitutional because it doesn’t offer all the same rights as marriage. For example, they wrote, domestic partners in New Jersey cannot own property as “tenancy-by-entirety” that allows for automatic inheritance, cannot get back wages owed to a deceased partner, miss out on various tax benefits, and can be compelled to testify against their partner in court. But California’s Domestic Partnership law (A.B. 205) already gives same-sex couples most of these rights – without having full marriage equality.

The Court instructed the state legislature to extend the “rights and benefits enjoyed, and the burdens and obligations borne” of marriage to same-sex couples, but stopped short of saying it had to be “marriage.” They even suggested that a separate “civil unions” structure that gives gay couples the same rights would be acceptable.

But here’s the problem – even if New Jersey were to expand Domestic Partnership rights to more closely mirror states like California, it would still not be “equal” to the rights of marriage. Because states have no control over the federal government, domestic partners cannot get Social Security, U.S. military pensions, immigration rights, or file a joint federal tax return. And unlike marriage, domestic partners are not guaranteed to have their relationship recognized if they move to a different state.

There are also procedural problems to a separate “civil unions” scheme. As the Court pointed out, it is currently harder to enter a domestic partnership in New Jersey than it is to get married – partners must prove (a) a common residence, (b) joint financial arrangements and property interests, (c) an agreement to take care of each other’s living expenses, and (d) that they have agreed to share each other’s lives. If the state legislature goes with civil unions, said the Court, it “cannot be more difficult than it is for heterosexual couples to enter the state of marriage (65).” Either the state would have to require married couples to also prove these four things, or else make a civil union as easy as going on “Who Wants to Marry a Millionaire.”

And while we could expand domestic partnership rights to include all the current legal rights of marriage, it still wouldn’t resolve a basic problem. “Marriage” is a universally understood concept throughout the world that courts will honor as a relationship worth preserving. The law doesn’t make decisions on what’s said – but on what’s left unsaid. When a committed couple is not married, they have to go through many more hurdles and steps to get basic rights honored that a married couple can take for granted. Although places like California have passed comprehensive domestic partnership laws that expand the rights of same-sex couples, not even the brightest legal minds today can draft a law that will take into account every possible scenario to make them equal to marriage.

The New Jersey Supreme Court has given the state legislature 180 days (six months) to come up with a solution. Even if they grant full marriage equality to same-sex couples, it won’t happen until after the Election – which is next week. New Jersey’s State Assembly isn’t scheduled to meet until November 9th (two days after the Election), and the State Senate won’t be in session until November 13th. Therefore, the political consequences are not likely to be significant.

Paul Hogarth received his J.D. at Golden Gate University Law School in May, and is awaiting the results of the July 2006 California Bar Exam. In the summer of 2005, he worked for Equality California in their Marriage Equality Campaign. Send feedback to paul@thclinic.org