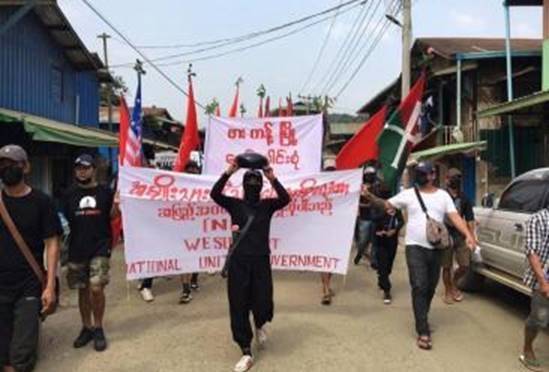 On Mayday, a lone man scrawled slogans in red paint on the front wall of the Myanma Oil and Gas Enterprise [MOGE] office on Pagoda Road in Yangon, Myanmar.   The slogans demanded that four international energy companies, the largest being Chevron and Total, stop their payments to MOGE that provide monthly payments through their joint venture with MOGE that fund the murderous military machine that is at war with the people of Myanmar.

The man in Yangon was not standing alone.  The legitimate civilian National Unity Government of Myanmar, now reconstituted to include representatives of the ethnic groups that have long fought for autonomy, made the same demands.  Sheltering underground in Myanmar itself, Maung Maung, president of the largest union confederation, the CTUM, sent a similar message.

Around the world Burmese communities and solidarity organizations that support their cause have amplified that call for several weeks.  Italia-Birmania Insieme [Italy-Burma Together] had already launched a GoFundMe appeal to provide essential communications equipment for the CTUM to maintain its network within Myanmar, and provided the platform for DSA to launch its own GoFundMe site for the CTUM.  Campaigners from Info Birmanie in France, prior to the recent pandemic lockdown had demonstrated against Total’s payments to the military regime.

An informal working group of the Coalition against Chevron in Myanmar is composed of representatives of the various Burmese communities in the USA, together with organizations that have long been campaigning for human and worker rights in Myanmar, of several national environmental lobbyists and some members of the various subcommittees of the DSA International Committee.  There is also a somewhat looser network that includes labor union representatives in the USA and Myanmar union leaders, some underground inside Myanmar, and others in temporary exile in the USA and Europe, together with their supporters and other Burmese and human rights solidarity organizers in Europe.

To date there have been significant organized protest actions targeting Chevron in Denver [April 11 and 16], Houston and Pasadena [April 17]; Washington DC, New York San Ramon [Chevron headquarters], all on April 16.  Videos and other visuals available on the new public Facebook page of the Coalition against Chevron in Myanmar at https://www.facebook.com/groups/263548775494329.  This Facebook page was created and maintained by the Burmese activists within the coalition.

Chevron [ in its previous incarnation Unocal] has long been a target for human rights and environmental campaigners throughout the world.  Its record throughout the world is notorious for its disregard for indigenous rights, in despoiling the environment and directly harming workers and communities.  Besides Myanmar, Chevron is currently a target of environmental and worker rights campaigners in Ecuador and the Philippines, where it helps prop up Duterte just as it does the murderous military regime in Myanmar.  In Richmond, California, Chevron spend millions of dollars to a failed try to unseat critics of its environmental pollution in that community [from one of its four large U.S. refineries].

In Myanmar Chevron and the French energy giant conglomerate Total are the major foreign partners in a joint venture natural gas offshore production and pipeline company with the military-controlled Myanmar Oil and Gas Corporation [MOGE].  Total and Chevron contribute directly to the military government through tax payments to the government and through direct monthly payments to MOGE.  These revenues are currently the largest single source of income for the Myanmar military.

Burmese civil society organizations have taken the lead in demanding that payments to MOGE be suspended until the military stops their repressive actions and a more democratic government is installed. An appeal to Chevron and Total was endorsed by 403 Burmese civil society organizations:  https://progressivevoicemyanmar.org/2021/04/20/open-letter-to-total-and-chevron/

Global labor organizations support this call. For one example, here is an official letter to Chevron from the United Steelworkers [USW] International President Tom Conway. The USW represents the workers at the Chevron refineries in the USA.   https://docs.google.com/document/d/1gJxc8edR_FidQaH1TJxIx6eMB1qvaMYLC9kKcVyEuxQ/edit?usp=sharing

Media coverage resulting from the first wave of demonstrations

These demonstrations and statements helped call attention to how Chevron is bankrolling the Myanmar military’s war on its own people in the mass media.

The New York Times published an excellent report [4-23] on how Chevron is lobbying hard in DC against any restrictions on its profits from Myanmar.  Chevron Lobbies to Head Off New Sanctions on Myanmar.docx – Google Docs

The editorial board of the Washington Post issued an Opinion supporting the goals of the campaign: https://www.washingtonpost.com/opinions/global-opinions/its-time-to-cut-off-the-gas-for-myanmars-military-coup-leaders/2021/04/22/83cdd5a0-a384-11eb-85fc-06664ff4489d_story.html

Action in the Biden administration and in Congress

Several environmentalist and labor organizations have been making the same case for cutting off payments from Chevron to the military regime in Washington DC.  Sen. Markey conducted a subcommittee hearing of the Foreign Relations Committee that featured testimony from Thomas Andrews, the UN’s Special Rapporteur on Myanmar to the Human Rights Council.  Andrews had made a comprehensive report that included his recommendation for international sanctions against MOGE and the natural gas joint venture.  With action in the Security Council blocked by the threat of vetoes from Russia and China, Andrews made a plea for a coalition of member states to economically isolate the Myanmar military.  https://www.ohchr.org/EN/NewsEvents/Pages/DisplayNews.aspx?NewsID=26884&LangID=E

With input from members of the Chevron campaign who lobby Congress on environmental and human rights issues, a bipartisan group of six U.S senators sent a letter calling on the Biden administration to freeze all foreign currency revenues and foreign exchange reserves held in state accounts outside of Myanmar. The senators said that the administration’s first step should be imposing sanctions on the state-owned Myanmar Oil and Gas Enterprise (MOGE), now under the control of the junta’s leaders.

The English-language The Irrawaddy [one of the few media sources that can still reach people in Myanmar] gave an extensive and accurate report: https://www.irrawaddy.com/news/burma/us-senators-call-for-sanctions-on-myanmar-oil-and-gas-enterprise.html.

This report was widely shared on social media in Myanmar that can evade strict military control of the internet.   As the military crackdown continues, imprisoning, torturing and killing worker and democratic activists, reports like this keep hope alive that somehow worker rights and democracy can be restored to Myanmar.

The Coalition is planning more events and demonstrations in various places throughout May.  Chevron is holding its annual shareholders’ meeting in San Ramon on May 26, while Total is holding its meeting on May 28 in Paris.  If the companies have not voluntarily ceased payments to the military regime before then, there will likely be major protests in San Ramon.  There may also be additional protests near the Chevron refineries in Richmond and Los Angeles CA and Houston TX sometime in May.  For all updates and additional documents, go to the Coalition Against Myanmar Facebook site at https://www.facebook.com/groups/263548775494329