My Life of ‘O’Reilly’: A Memoir 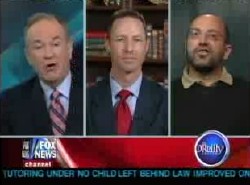 The New York Times has published the goods on the O’Reilly Factor’s ambush field interviews. Anyone who has ever experienced a classic live in-studio beatdown by Bill O’Reilly himself, such as I have, can tell you that’s not the half of it.

But at least the ones who have been booked onto the show do so voluntarily and, I would argue, for a reason: media sadomasochism isn’t as hard as it looks, and it’s hot stuff commercially. Generally speaking, we subject ourselves to such indignities — whether cable news shout fests or reality-show humiliations — not because of what we don’t know about them going in, but despite what we do know.

On June 23, 2007, I was winging back to California from a flop of a promotional tour for my book Wrestling Babylon: Piledriving Tales of Drugs, Sex, Death, and Scandal. I thought, “Game over.” What I didn’t know was that at that very moment, World Wrestling Entertainment star Chris Benoit was in the middle of murdering his wife, their 7-year-son son, and himself in a rampage outside Atlanta that would dominate Nancy Grace for weeks and be named by Time Magazine as one of the year’s most sensational crime stories. Suddenly I was a go-to guy.

On Tuesday, June 26, I had my first of several shots on MSNBC’s Live with Dan Abrams. The next day an O’Reilly producer, Mary Ragsdale, booked me. Mary told me to report in an hour to a studio at the University of California in Berkeley, where I live. I would be interviewed on a remote satellite hookup. Fortunately, my oldest son was home from college. He and his younger brother and two younger sisters – including a toddler for whom I was on child-care duty – dropped me off at the edge of campus and picked me up immediately afterward. (My wife was at work.)

O’Reilly was interviewing me in conjunction with a commentary, which linked the Benoit tragedy with the murder by her boyfriend of a pregnant woman in Ohio. O’Reilly built his “Talking Points” around the suggestion that the women in these situations bring these woes upon themselves by willfully associating with “troubled and chaotic individuals.” The entire segment can be viewed here.

Joining me from another remote hookup, in Kansas, was a forensic psychologist named Brian Russell. His main job was to sport a shit-eating grin, no matter how gruesome the subject matter, and agree with whatever O’Reilly said – except to the extent that the host might outflank him in insight or outrage.

Whether I was consciously set up to be the designated piñata is unknown. The die was cast, however, as soon as I demurred from the premise of O’Reilly’s first question. “I have to challenge your characterization of [Benoit] as a troubled individual,” I said. “… Chris Benoit was not Jimmy ‘Superfly’ Snuka, who is in my book and battered women on the road, and probably was responsible for the death of a groupie in a motel room outside of Allentown, Pennsylvania, in 1983. By all accounts, Chris Benoit was a good guy. I think the crime speaks for itself. I don’t think we’re ever going to know exactly what happened down there in Fayette County.”

Later I spoke of “a culture of death and deviant behavior in the world of professional wrestling” and agreed “that has to be taken into account in this case.” Benoit was “crazy, yes,” but only in the sense that he took large doses of painkillers in order to keep performing after suffering a broken neck. That wasn’t good enough for O’Reilly.

“Come on! COME … ON!” he railed. “Don’t apologize for this guy!” (The summary of the segment on the show’s blog would note that “The Factor vehemently rejected” Muchnick’s “rationalizations.”)

Supporting O’Reilly in the execution of this elevated colloquy were production techniques first tested and perfected by Ted Koppel on ABC’s Nightline. O’Reilly could see me but I couldn’t see him. All I had was an earpiece in a sensory-deprived enclosure, and I wasn’t cued on when my microphone was on or off.

Back at home, there was already a consoling message on my answering machine from producer Ragsdale. “Bill roughed you up pretty good,” she said, “but you stood your ground.”

As the show aired, I got calls and emails from commiserable friends. I laughed and changed another diaper.

A blogger with the handle “Blackjack” (who disclosed that he owned stock in Rupert Murdoch’s News Corp., the parent company of Fox News), wrote, “After watching the way O’Reilly treated Irv Muchnick, I think I’m pretty much done with the show.”

Early the next morning KMOX, the most powerful radio station in St. Louis, called for an interview. St. Louis, my hometown, was where I had been on my bust book tour the week before. While I was making appearances there, I had been unable to land an interview on KMOX. (A local TV station had interviewed me for a Sunday night sports show, but never used it. The interviewer told me that the local newscast ran one sound bite from me that turned out to be relevant to the flood of Benoit coverage, but I never got any evidence that he was telling the truth.)

By this point, the Amazon rank of Wrestling Babylon was in the 200’s. My book editor, Michael Holmes, said this was the best Amazon number in the history of his company, the Toronto-based ECW Press. Soon, Michael was signing me to write another book.

In “Use Me,” Bill Withers sings, “It ain’t too bad the way you’re using me / Cause I sure am using you to do the things you do.” That is the tune of O’Reilly and his antagonists. Later this year my Chris & Nancy: The True Story of the Benoit Murder-Suicide and Pro Wrestling’s Cocktail of Death, will land in a store near you. And as we say in the wrestling world — which every day, in late-empire America, more and more resembles the world — I look forward to the rematch.

Irvin Muchnick blogs at http://muchnick.net/babylon and http://freelancerights.blogspot.com, and tweets at http://twitter.com/irvmuch. He is lead respondent in the current landmark Supreme Court case on freelance writers’ rights, Reed Elsevier v. Muchnick.