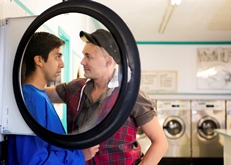 There is a Handsome young boy (Omar). He meets up with another young man (Johnny). Omar is Pakistani mixed with British. Johnny (British) is more or less a street person. He’s a down to earth kind of guy that is about to fall into the arms of Omar.

Omar tries to get a business going in his country. Omar (Javi Harnly), also tries to balance being Pakistani and British at the same time. This is not easy for the young man and his friend (Robert Rushin) – Johnny. Both boys are confused. Having different cultures – is not easy. This is a heated romance. The two boys fall in love. Omar is not quite ready for romance right now – but he heading that way. Omar has lots of things going on in his brain. Can Omar and Johnny fall in love with different cultures?

There is the political points that make it difficult for the boys. There are the Uncles and Fathers that are getting a little suspicious about the young guys . Omar and Johnny try to keep away away from the relatives. Their strength and fragility is well displayed. The two boys try to cover up their romance. That’s tough!

The subtle humor is dry, and it flows with the young men. They have a huge transformation to contend with – (The Launderette.) Omar wants to be a successful business man – and Johnny wants to help out, but seems to be in another world. The complexities keep Omar moving towards his goal. He pretty much finds what he wants in the end — but the story does not end in a solution for everyone. All have their own lifes to deal with (money and lifestyle). Working Class Johnny is basically in a downtrodden society. But – his oppression does begin to sparkle near the end. Brits and Pakistani’s don’t always blend.

The climax sets off political fireworks. The two boys of different lands unveil themselves. Johnny and Omar go on with their exciting and genuine love for each other. Life goes on. Sparks fly. It happens to everyone. Kiss – Kiss!