Municipal IDs: SF Must Get its Act Together 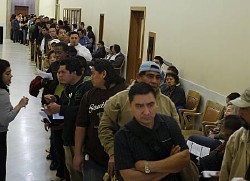 Two weeks ago, San Francisco took a major step forward for immigrant rights by offering Municipal Identification Cards, regardless of immigration status. This is the story of what one person- a native English speaker with internet access and a salaried job near City Hall that allows me to run personal errands during business hours and a knack for wading through red tape out of stubbornness, went through to get a card. It was no easy task, which may explain why I am only the 79th person to receive a card after four days of operations. Using conservative estimates, 3 out of every 4 appointments are being denied- and many more are being denied appointments.

The only outreach the city has done for the program has been by creating an English-only website which includes information on how to apply, which is not only unclear but was repeatedly contradicted by city staff I spoke with. The City’s website explains that ‘same day appointments are not available’ and you can make an appointment at the County Clerk’s Office between 8:00 AM – 4:00 PM.

After being directed towards the Northwest corner of City Hall, I followed the handwritten sign stating ‘City Ids’ with an arrow incorrectly pointing to the Mayor’s Office of Neighborhood Services and received no help from the woman behind the counter, so I backed up and continued onward to the City Clerk’s Office. I followed the crowd and stood in line with many happy heterosexual couples about embark on their journey of marriage and waited for my turn.

When I made it to the counter, the City Clerk staff tersely explained that they were only making 100 appointments per day, beginning at 8:00 AM and I should show up by 7:00 to make sure I got in line. I was told I could not make a future appointment- same day appointments only. Perplexed, I asked if I could make an appointment using 311 or the email address listed on the website and received a quick ‘no.’

Frustrated, I went back to my office and called 3-1-1. I was quickly transferred to a five minute recorded message from the City Clerk’s Office which offered no mention of Municipal IDs. In a third attempt, I sent an email Friday at noon asking for an appointment the following week with some mid-afternoon times where I could use my lunch break to hop over to City Hall and received no confirmation my email was received.

After another failed attempt at a walk-in on the next business day, Inauguration Day, and again being told that only walk-ins at 8:00 AM would be honored, I was feeling frustrated. While waiting in line, I watched two happy young lovers smiling and remembered the fun days in May 2008 when Mayor Gavin Newsom held marriage ceremonies on the steps of City Hall and press conference after press conference declaring that San Francisco would lead the nation in the fight for equality. This time, things felt different.

Mayor Newsom, who had once supported the program, had declared in 2007, “We are a sanctuary city, make no mistake about it.” Unfortunately, he couldn’t clear his calendar to attend the press conference announcing the Municipal IDs the week earlier. But the mayor’s lack of public support for the program isn’t all that is lacking- there is no official Seal of San Francisco on the application or in the municipal ID office and nowhere do the documents refer to the mayor, as is customary for official city documents. It feels like mayor and the city itself is trying to disassociate itself from this important program and, in turn, attempting to make this bold stance for equality into an embarrassing secret.

In fact, the actual location where ID’s are processed and distributed are deep in the bowels of City Hall’s basement. There is no signage directing you to the room as you wander by closets full of janitorial supplies and computer servers. The confirmation email I finally received with less than 24 hours notice before my appointment neglected to mention the location of my appointment. I waited in line at the County Clerk’s Office for the third time, only to be redirected to the unmarked room in the basement, where I was eyed suspiciously as I entered.

I began to fill out the application which confusingly asks for a “Signature of Parent/Legal Guardian” but not an applicant signature. I, like many San Franciscans use paperless billing for environmental reasons, so I handed over a print-out of my recent Comcast payment receipt only to discover it did not include my address. My fear had come true- I had struggled for hours to get this appointment and now I didn’t have the correct paperwork. I begged successfully for the staff to allow for some leniency in my appointment time while I rode my bike faster than any messenger to and from my office back to the basement of City Hall. I made it back huffing, puffing, and sweaty with a recent pay stub in hand- thankfully, since I am allowed to work in this country, I was able to provide my employer with accurate information without fear of arrest and deportation.

Finally, after hours of sorting through conflicting information from city staff, battling red tape, standing in lines, and wandering through City Hall’s basement corridors, I became a Municipal Card Holder. With my perseverance, language and internet skills and employer’s flexibility, I was able to accomplish what at least 300 other applicants were unable to do. If it was this difficult with all the resources I had at hand, this system is clearly not working for those who need it the most. I’m extremely proud to live in a city where we can offer this protection for people without immigration papers, but until Mayor Newsom provides leadership to fix this broken process, regardless of his fears of impacts on his gubernatorial aspirations, the City of San Francisco has yet to make good on its promise to be not only a sanctuary city for all but ‘the city that knows how.’