MUNI Fare Hikes: Where Do We Go From Here? 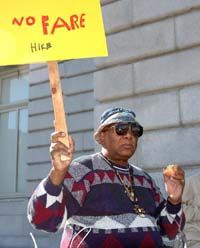 The Municipal Transportation Authority’s (MTA’s) Monday night decision to increase fares and cut services marks only the start of the debate over their budget. The focus now shifts to the Board of Supervisors, who can reject the MTA’s plan and propose a more equitable alternative. The challenge for fare hike opponents is building on the momentum achieved to date, rather than allowing the issue to disappear until the Board takes it up in June. Here’s what can be done to in the next few months to lay the groundwork for support of a more progressive Muni funding plan.

First, it’s important to recognize the vital role public protest against fare hikes and service cuts have already played in this battle. The percentage of the deficit Muni asked riders to pay for dropped by almost half during the budget-making process. The Fast Pass, for example, was initially to be raised between $9 and $15. Last night, the MTA voted to raise it by only $5.

This is not to say victory has been achieved. Instead, it should serve as motivation for Muni riders, non-profits, and low-income and working people throughout the City to expand their base of opposition to the cuts and hikes, as well their actions protesting these measures. This visible movement will help influence the Board of Supervisors in their decision once the MTA’s budget gets to their desks.

Ultimately, however, getting the eight votes on the Board of Supes necessary to reject the MTA’s proposals will require a realistic alternative budget that lays out new sources of revenue for Muni. There are two types of sources that should be developed; those that increase revenue from sources already obtained by Muni, such as parking fees and fines, and those that seek creative, new ways Muni can fund its operations.

Increasing revenue from sources already obtained by Muni could provide some concrete, reasonable options for funding to replace fare increases. One possible option the MTA ignored is the expansion of the geographic areas were residential parking permits are required. Massive chunks of the Sunset and the Richmond do not require residents to buy permits, representing a major source of untapped revenue. The possibility that many residents of these neighborhoods would support required permits because they keep out car owners who use these neighborhoods as parking lots could make this an easy sell.

In addition, many of the increases in parking citations could go higher, particularly those that affect public transportation. The penalty for parking in a fire zone was increased to just $50 in the current budget proposal – it could go up to $100 without opposition. Double parking, which often contributes to Muni busses not running on time, was increased to a mere $65. It should be raised more. In addition, downtown parking meter rates should be raised as high as possible to a level still politically palatable to the Supervisors.

However, even if all these options are used, it still will probably not raise enough funds to close the deficit. Alternate sources of revenue must be developed, and it is here where transit advocates must exercise the most intelligence and creativity.

Several ideas are floating around for new sources of revenue that can be quickly implemented for Muni. Supervisors Aaron Peskin and Ross Mirkarimi have been working on a downtown transit assessment fee that would force businesses in the financial district to pay Muni for the benefits public transportation grants them. Some have floated the idea of earmarking a certain portion of revenue from the Mid-Market Redevelopment Area for Muni. And Jake McGoldrick has proposed a downtown toll, though it seems unlikely this can be set up in time to start earning funds for the 2005-06 fiscal year.

Perhaps the best way to explore all options for raising revenue is to hold a public hearing at which a representative from the City Attorney’s office is present. A variety of options could be proposed at the hearing, and the possible legality of every one could be assessed by the city attorney’s office soon after. Supervisors and activists could then choose from a list of realistically possible new sources of revenue.

Before this process begins, however, the Supervisors should request that the MTA’s budget proposal be immediately audited. Several activists and union members intimately familiar with the MTA have raised questions about discrepancies and odd accounting within the current budget proposal. There has been no independent analysis of the MTA’s budget, and Harvey Rose’s office should step in to fill this void.

Whatever strategy progressives develop, it will be a long and contentious battle ahead. But it is an important one. The potentially devastating effects on these cuts to poor and working class citizens should be seen as completely unacceptable to those concerned with economic and social justice. And environmentalists must recognize the importance of encouraging people to ride public transportation rather than discouraging them.

And most importantly, transit advocates must recognize that no matter what the MTA’s vote Monday night, the fight is far from over.