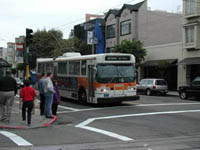 “We are required now to work together for the good of our country,” declared Senator John Kerry the day he threw in the towel. “We must join in common effort, without remorse or recrimination, without anger or rancor.”

Gag me with a spoon.

With the neo-fascists in the Very White House licking their chops in anticipation of the next four years of plunder here and abroad; with the prospect of Patriot Act II, III and IV coming down the pike; with our troops massed at the gates of Fallujah in battle garb, being readied to kill and die to protect Haliburton’s profits — with all this, Mr. Democrat performs his biggest Flip-Flop ever, telling us to get in the Swift Boat with him and go upstream and kill a few gooks to prove our loyalty.

At the very same moment that Kerry was delivering his concession speech, our fellow hotel workers, here in Baghdad by the Bay, were pounding the sidewalk for the fifth week in a row. Should we now join in a “common effort, without remorse or recrimination, without anger or rancor…” with the hotel bosses, “for the good of the country?”

That brings us to Mayor Gavin Newsom, the man who got photo ops and headlines by showing up on the St. Francis picket line. Pissed off the hotel bosses, he did, for real. The man has a knack for getting in the face of certain evildoers, whether it is the Hotel Council or the Christian Coalition.

But where politicians flip, they can also flop. The latest from Newsom is the buzz that another MUNI fare increase is in the works. With the failure of the sales tax increase and the gross receipts business tax, the Man is looking for money, and working people who need to get to work seem to be the latest target.

Prop K, the gross receipts business tax, was a con job. It began with Newsom’s con at the Board of Supes, claiming that he had a deal with downtown to make it happen. The supes bought it. Instead of a real Yes on K campaign, however, financier Warren Hellman and Committee on Jobs shill Nathan Nayman went through the motions of throwing a few bucks into the pot. Does anybody doubt that Prop K would have passed if the downtown crowd had put the kind of money into the campaign that they usually put into defeating business tax proposals? Nah, winning wasn’t part of the game plan.

The con continued with the No on K crowd, who claimed that it was a “small business” tax. No matter that it was the downtown commercial property owners like Shorenstein, Hines, Equity and Boston Properties who would have had to pony up the lion’s share of this levy. They, of course, let their insurance guy Scott Hauge lead the charge — a man who doesn’t even have to pay his full share of the existing business tax — with the Chronicle and local corporate media echoing the lies.

Hauge and his small business pals claimed that they would have supported an increase in the business payroll tax if Newsom had come to them to talk about it before launching Prop K. Okay, Hauge, will you now? Does Newsom have the wherewithal to even ask the question?

The city does have emergency powers that could move these options along. Don’t let the hucksters and plutocrats tell you different. A determined administration — and Newsom has shown that he does have a certain amount of determination — could make these things happen, or at least point the finger at the corporate thieves feeding at the trough, instead of rolling over and gouging the little guys like you and me.

Here’s something to ponder. Mike Casey, the leader of UNITE HERE Local 2, the hotel union, also sits on the Municipal Transportation Agency that would have to pass on any MUNI fare hike. Will Mike stand up to Newsom if he asks for a MUNI fare hike? Or will he consent to what in effect would be a backdoor pay cut for Local 2 members working in the downtown hotels?

No, Senator Kerry, we are not required now to make nice. We are required to fight to defend ourselves and our families, for the good of our country, and the world.

Truly, the whole world is watching, to see what happens next in the home of the free and the land of the brave.

Marc Norton is a founding member of San Franciscans for Tax Justice, and a long-time member of Local 2. He can be reached through his website at www.MarcNorton.us.