by tiny/PoorNewsNetwork/POOR Magazine on September 16, 2004 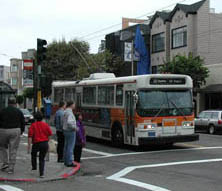 “Yeah, a mid-night train is coming Right down “Homeless Row” The Metro, co-signed by “Mr. Willie” The Bar-be-cue’s of Bayview, he threw yearly Oh but it’s going to cost the home owners dearly Trickin’ the people to cut their own, pocket books

Yeah, they used to Lynch a Nigga, at Southern Bar-be-cues Young bloods mis-guided, hating one another Railroaded to Jail, by the coming of the Lite rail. No jobs, no homes, get out of the way, toot, tooted!”

Excerpt from “The coming of the Rail”
By Po Poet Laureate A. Faye Hicks

Large concrete teeth sliced through the asphalt. Dirt filled my
shoes, dust infested my nostrils. And I was only half-way across
Third Street at Paul. On this bright Tuesday morning in September I wavered between the sort of safety of the crumbling curb and the near death of the middle of the non-street in ground zero of the largest, most devastating gentrification, oh excuse me, Development projects to hit a poor African-descendent community since the decimation of the “Fillmo.”

So how do you destroy an entire community without a bomb, a firefight or missile?

“They are building this project right up the middle of this mostly
Black community (BVHP) and they aren’t kicking down any of the money or the contracts to the black residents of this very community.” After I walked through the mess that is Third Street circa 2004, I ran into longtime Bayview resident, Kyle, who has lived and worked (when he can find work) in San Francisco for the last 20 years.

“It’s the same ol’ story, how do you get rid of people? Sell off
their land and their contracts to outsiders until one day they become the outsiders in their own land,” said Kyle looking in the direction of the other big “gentrification” (read: displacement) project in BVHP. This involves the demolition of several hundred projects “on the hill” by the Redevelopment agency and the rebuilding of market-rate condos in their place, which this PNN
reporter considers another frightening example of 21st colonization.

Kyle told me that on many occasions he has inquired into job
opportunities in the li(t)e rail project from MUNI, the City, EDD,
etc., only to be given the runaround in more ways than one.

I came to BVHP this morning to meet with Kyle in preparation for a Transportation hearing held later this same day at San Francisco City Hall to approve the funding (with sales tax and release of Prop K funds) of The Metro East Maintenance Facility which was chaired by San Francisco Board Supervisors’ Chris Daly, Bevan Dufty, and Sophie Maxwell.

The issue of who will get this contract and who will be hired has the ire of several San Francisco City Council members, including Matt Gonzalez, Chris Daly and even District 10’s sometimes hesitant-to-act, Sophie Maxwell. MUNI has shown a lack of compliance with the standard hiring quotas (50% resident, 25.6% minority, 6.9% women) given the fact that the multi-million dollar project runs up Third Street right through the African-American community and has so far not been given to a local African-American contractor.

“I have a stack of memos, that are only just that, memos from
meeting after meeting with officials, and none of those translate
into jobs.” At the meeting, I spoke to Gus Amador teacher in one of the community based organizations doing training for the very jobs that would be needed if MUNI were to follow the hiring quotas and open the bidding to African-American contractors rooted in the community. Gus concluded with a sigh, “I am training low-income residents of this community to become union carpenters and the bottom line is these San Franciscans deserve to get jobs in San Francisco.”

This meeting was held at the SF Transportation Authority one week after a 300 community-member strong meeting was held before the Human Rights Commission. The fact that the Human Rights Commission was so well attended and this meeting (the one that really mattered,) much less so, was no accident. The CBO’s (community based organizations) who on one hand will benefit if these hiring quotas are followed, because their
participants will be hired upon graduation, are also receiving money from the very folks who are leading the gentrification/ decimation of BVHP, the Mayor’s office of Community Development, et al. These same CBO’s decided that it was
imperative that they hold classes today at the same time as the Transportation hearing.

“I just want to make sure we look at both sides of the coin,” said a man who represented himself as a consultant to non-profit agencies that provide employment and training. He spoke to me outside the hearing in hushed tones, “Yes there is always room for improvement in contracting opportunities, and there is always room for improvement in employment and training
opportunities, but I do want to say that there are a number of CBO’s that have been very successful in training and placement in projects such as the MUNI lite rail project.” Now this well-spoken African-American gentleman completely confused me with paragraphs that sounded a lot like they came right out of a
grant proposal or MOCD Request For Proposal(RFP)so I had to ask again, “Are you saying that MUNI is employing the BVHP community or not?”

“Well, what I am saying is that MUNI has been creating some employment for the community and leveraging other funds to create other training and placement situations*” At this point a whole rush of youth who had just spoken before the panel rushed out of the door in a wave of protest, only to meet the eager gaze of Apolliona’s skilled camera, which caused the perfect distraction for my consultant friend, well-timed because I didn’t know how much more double talk my brain could hold.

Some noteworthy comments from the Board members present included one by Sup. Chris Daly, “Unless you satisfy the people in the community, I am not voting for this” (funding) and even an unusually scathing comment to MUNI from Sophie, “Aren’t you just doing the same thing again?”

Several powerful folk from the community did came up to speak as well, one of which was a young African-Descendent woman, Erica Mccrury, proud enough of her hoped-for future with MUNI, that she even donned the requisite orange mesh jacket over her gray sweatshirt for a PNN photo, “I am an out of work veteran
of Desert Storm, and I just want to make sure that when I graduate [from pre-apprenticeship program], I get a chance to work on the lite rail project rather than them bringing folks in from the outside.”