MTA will remain in the hands of the Mayor 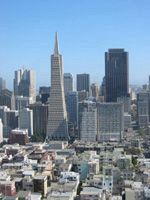 The goal of the proposition was to create a more balanced opinion when it comes to making decisions about issues such as fare hikes, and how to fix MUNI’s 57 million dollar deficit.

At a kickoff rally for Prop. D in October, Amiano said he feels that giving the Mayor complete power over all of the nominations is “bad policy.”

After the polls closed last night however, Gavin Newsom called the result a “big victory.”

According to political analyst David Latterman, “transportation is political in this city.” He went on to say that everyone who is political has something to say about MUNI.

“It’s the nature of the beast in this city,” he said as the final results began to trickle in.

“I feel like you should spread it out,” said voter Gerardo Gonzalez. “Then you can have all kinds of people that put their word into it.” Gonzales feels that the Board of Supervisors is more visible in San Francisco than in any other city that he has lived in and would appreciate more perspective

“MUNI is full of problems and this is something that could possibly have changed that,” said Gonzalez.