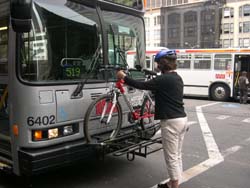 Another meeting of the MTA’s Transit Effectiveness Program’s CAC happened this past Thursday night. More examples of violations of ordinance, long-established parliamentary procedures, protocol, and citizen involvement. As well, more ignoring of the priority needs of the transit-dependent–seniors, youth, and people with disabilities. Sorry to say, it already seems a case of: same old, same old… A pattern already has been established, though not acknowledged.

Throughout the meeting the facilitator bulldozed through objections or stated that concerns would be noted. But, the selection of a 2nd representative to the Policy Advisory Group was most noteworthy for the favoritism and legal-procedural problems throughout. The item was scheduled for early in the meeting. When nominations were asked for, suddenly one person asked to have the vote delayed so one of the nominees–notorious for late arrivals everywhere–could be present.

Maybe acceptable, but what’s noteworthy is that the person who requested the delay and the late-to-arrive nominee were each representatives of the two agencies highlighted in a previous column for religiously, if not adamantly, failing to do outreach to get knowledgeable and accomplished disabled people to consider being on their respective agency’s board of directors. The makings of a real campaign were evident, as indicated by the sudden departure from the room of the delay-requester to make a hurried cell phone call–essentially the behavior of a campaign “advance person” trying to ascertain the whereabouts of the candidate. This took extra time, which showed up later in additional electoral problems.

And, nobody questioned why it was so important to delay the election for someone not efficient and courteous enough to arrive on time, nor why a late-arriver is a good candidate.

Cut to the end of the meeting, when the election was held in the last 3 minutes. Suddenly, there wasn’t time for any of the three nominees to make any statements about what they could do or hoped for from possible participation in the Policy Advisory Group. Why that’s relevant will be detailed later. What’s significant here is the procedural problem and violation of law that took place–and that is was done in the personal presence of a very high-ranking staffer from the Controller’s office, who maintained total silence throughout the faulty election.

Faulty? Go back to the fact no candidate was allowed to make any statement of goals or topics in wanting to be on the Project Advisory Group, nor how each candidate saw the job of representation. Who decided that? ONE staff person. Many acquiesced to staff deciding how an election would be run.

Then, there was a SECRET vote. Who decided on a secret vote? STAFF. Staff said “A FEW people” had requested a secret vote, even though this is a public body. But, the CAC itself didn’t decide it’s election procedures. The feelings of a few [ non-disabled, of course, and also members of the groups previously exposed as not reaching out to include the disabled on their boards of directors ] people were interpreted by staff as tantamount to a decision by the entire CAC on how to run the selection of a 2nd representative to the Policy Advisory Group. A privileged able-bodied few have private conversations with staff and sway an electoral process their way, rather than communicate in public to a public body.

What’s worse, though, is that neither staff nor the consultant nor the attendees showed knowledge of 4th grade arithmetic and junior high civics. When the vote was counted, it was 9 for one candidate and 4 each for two other candidates–for a total of 17 votes cast. The person who got 9 votes was declared the winner by the CONSULTANT–which consultant just happened to sit on the board of directors of one of the agencies [ SPUR ] documented in the previous column as failing to outreach to accomplished people with disabilities. This could be an problem in ethical oversight–counting votes for a colleague.

[ It’s worth noting that the consultant who counted the votes, though noted and respected, still never could admit that a report done for MUNI, and supported by SPUR, on the theoretical “G” line presented and ignored massive political and cost problems for disabled access. This “G” line concept proposed using old streetcars on the surface portion of the “N” Judah streetcar tracks through the Haight and Inner Sunset to end in the museum concourse area of Golden Gate Park. The disabled access construction costs and political problem was that a “G” line would require removing vast amounts of curbside parking–dramatically raising the costs and reviving a bitter battle the disabled lost to residents of the Inner Sunset over access to the UCSF accessible stop. More about why this reference is relevant. ]

Maybe the election result would have been the same if the three candidates had been able to make a brief statement, and maybe the result would have been the same if one candidate had achieved a majority of the eligible votes. But, neither MTA staff nor Controller’s staff–INCLUDING that very high-ranking member of Controller’s staff, nor consultants nor the many non-disabled in the room showed any interest in rules or protocol.

So, whether the non-elected but proclaimed 2nd representative of this group shows up for the Wednesday, 2:30 pm meeting of the Policy Advisory Group in Room 278 of City Hall will be another test in credibility and willingness to follow rules and protocol.

Which leads one to wonder what other rules and protocol are ignored, side-stepped, or bent. Remember, the previous column pointed out how MTA and Controller’s staff selected as primary representative the staff director for two city agencies rather than follow protocol and precedent by naming the elected chairperson.

How good can the decision-making process for this Transit Effectiveness program be if this process of ignoring, side-stepping, and violating rules, procedures, protocol, and precedent be continues?

Worse, look throughout this and previous columns for an unfortunate but common problem–that the able-bodied know better than the disabled. At last Thursday’s meeting, an exercise in ranking importance of pairs of different choices was criticized for bias–biased against disabled access and services–in that the explanatory wording is similar to a political”push” poll. The response from the able-bodied consultant and MTA staff was that there wasn’t any bias.

Let’s take a minute here to get away from the disability topic and look at an hypothetical scenario that tests the credibility of these denial statements. Let’s say a bunch of male doctors and nurses set up a women’s health clinic. Why and how would they automatically be given uncritical acceptance that their plans for services needed by and beneficial to women are, in fact, fully appropriate? Yet, that’s the case continually with the disabled; the able-bodied ALWAYS say they agree with us but that THEY know better and that the disabled don’t.

The MTA and Controller’s staff who don’t know how to run an election, who don’t know how to pick appropriate representatives from public bodies, and who won’t explain why one person was automatically pre-selected to represent the Transit Effectiveness CAC; the consultant who denies bias in wording choices in a way loaded against fair evaluation about disabled needs and services and who can’t acknowledge problems for the disabled with the plans for the dormant “G” line; and even the heads of various funding and policy bodies [ the SFCTA, the MTC, the Board of Supes., and even the MTA board of directors–none of whom have asked any questions or commented on these many reported problems ]—

They continually, even by silence at what is going wrong, undermine or demean the disabled. They know what is best, and THEY know THEY don’t show any bias against the disabled; it’s the disabled who somehow don’t understand.

[ How often was that heard in earlier civil rights struggles–that those in power really didn’t have anything against the group crying out for inclusion and for justice; rather, it was just the way things were? And how often did we hear statements from those in power that the oppressed group really didn’t understand all the complexities and nuances of sophisticated issues? ]

So, since the views, concerns, and suggestions of the disabled are so often minimized or denied, here’s a modest proposal to establish a basis for accepting that the disabled can have decent judgment.

The high-IQ group Mensa used to have a FREE preliminary qualifying test. Since the disabled are marginalized and sidelined so often, let’s offer the opportunity for the MTA staff and the Controller’s staff and the upper management of the agencies who fund or have some political or financial control over MTA [ MTC, SFCTA. Board of Supes. ] and the MUNI Access Advisory Committee and the Transit Effectiveness CAC all take the Mensa preliminary qualifying test. What if some disabled person might be Mensa-eligible? What if some of the agency leaders, if those in authority, and / or if those well-reputed and catered to actually scored significantly lower than some people with disabilities?

Will the able-bodied in power accept this challenge? Stay tuned.

It’s a free test. What have they got to lose–except their smugness and arrogance? What can they gain–other than credibility amongst the transit-dependent for really responding to the concerns of groups unlike themselves? Are they worried about their image? So?