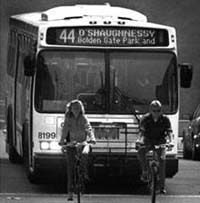 In an expected move on monday, the board of directors of the Municipal Transportation Agency approved a 2006 budget that will declare a fiscal emergency, increase the base fare and the price of a monthly pass, reduce service and increase parking fines, meter rates and garage fees. In presenting his recommendation to the board, Muni chief Michael Burns said that “Since we began this process in October, we have been faced with many difficult and unpopular choices” in trying to close the MTA’s $57.3M deficit. He said that the plan, which was roughly identical to the fifth “scenario ” put forward at the MTA’s last hearing, “represents a shared approach to balancing the budget” and tried to spread the cost as widely as possible.

Muni’s base fare will rise to $1.50, the senior, student and disabled fare will rise to $.50 and the price of a monthly pass will go up to $50, though transfers will stay free. Meter rates will rise by $1 per hour, the residential parking permit will jump to $60, and city garage rates will rise by up to $1 per hour. Muni will also cut its service by five percent across the board. The service cuts will be decided on over the next 60 days, following the usual review procedures, the parking fines will go to the Board of Supervisors over the next month, garage rates will change by April and the fare increases will take effect on September 1st.

The budget also includes preliminary plans for a “lifeline” monthly pass, which would be available through the Working Families Credit Program to those earning less than 200% of the federal poverty level (about $36,000 per year for a family of four.) Though the plan is not finalized, $250,000 are allocated in this budget to study the program, which would be run in conjunction with the Department of Health and Human Services. Any “lifeline” pass plan would be introduced when fare increases take effect in September.

Muni also deferred $10M worth of improvement projects, postponing the purchase of ten low-emission 30-foot buses and a cable car maintenance project in order to halve the contemplated service cuts. Deputy Director Steuart Sunshine, who presented details of the budget, said that Muni has plugged its budget holes with one-time sources for the last several years and warned that this $10M was the last source available.

Sunshine echoed Burn’s comments by saying that “We have tried to seek shared solutions to balance the budget.” He also said that when it comes to fares, “Muni is still on the low end of the top 25 transit properties” and that the coming service cuts would be a “minimal impact to the riding public.” Ultimately, the budget draws $13M of its new revenue from increased fares, $13M from service “adjustments”, $21M from parking fines and $10M from delayed maintenance. Sunshine also said that Muni had “begun conversations with the right people to effectuate long-term solutions.” He said that Muni had already started working with Mayor Newsom and State Senator Migden in Sacramento, to get the support needed for measures like a downtown assessment district or a traffic congestion charge that could prevent budget crises like this in future fiscal years.

The budget adopted was the only budget option that Muni presented to the MTA. Public comment at previous meetings has consistently accused Muni of not being creative enough in finding new revenue and in presenting few options for MTA approval. Director James McCray said that he had hoped to see “scenario 2”, an option presented at the last meeting which would have balanced the budget almost entirely by raising parking fees and auto-related revenues. Jeremy Nelson of Transportation for a Livable City, who also wondered where “scenario 2” had gone, said after the meeting that “We tried in hearings to make our case that revenue goals should reflect policy goals” but that he felt the MTA hadn’t listened. He suggested that a drastic increase in auto-related fees to fund public transit would simultaneously push people out of their cars and pull them onto buses.

Most speakers during the public comment session were against any fare increase or service cuts. Andrew Sullivan of Rescue Muni said that he was “concerned about the idea of deferring capital improvements” and told the board that he looked forward to working with them on long-term solutions. He suggested that the Board of Supervisors would be afraid of some measures, like vastly increased parking fines, but encouraged the board to say “bring it on.” David Popel said that “The board put the operating budget on the credit card and the bill has now come due.” He also claimed that “The level of trust among the employees is at a new low.”

Members of the Coalition for Transit Justice held a press conference before the meeting on the steps of City Hall, demanding that Muni not raise its fares. Bob Planthold of the Senior Action Network questioned the MTA’s will to make things better, saying “For years they’ve had the power to put tax measures on the ballot. They’ve done nothing. They’ve always waited for next year.” Soon after the meeting began, the dozens of CTJ sympathizers in attendance held up their yellow signs saying “No Fare Increase!” and slowly walked out. Sarah Noor, of the Central City SRO Collaborative said that although they had attended several meetings “we felt we weren’t heard” and said they planned to “appeal to a higher authority.”

The local head of the Transport Workers Union 250-A, William Sisk, declared the solidarity of the local and international union with riders at the same press conference. Sisk had no specific plans, but said that the union “had a lot of options” and asked “where’s the money going?”

In favor of the budget, including the fare increase, was the SF Planning and Urban Research Association, who encouraged the board to “please pass this emergency budget to preserve the future of transit in San Francisco.” Art Nachelle, a self-described “happy Muni rider”, said that “Muni is a fantastic bargain. There aren’t many good things that you can buy these days for $1.50.”

The vote was split four to two, with directors Wil Din and James McCray Jr voting against. Din sponsored an amendment to the budget resolution which would have prevented Muni from raising fares again without first meeting an 85% on-time standard during off-peak hours, saying that he wanted something with “more teeth” to hold Muni accountable to its riders. Michael Burns warned the board against the idea and said that he could not guarantee an 85% on-time rate. He also said that “it ties the hands of the board to pursue other options.” Though chair Cleopatra Vaughns asked Din to use “less definitive” language, he refused to change his proposal. The amendment was voted down, with only Din and McCray voting for it. The amendment will appear again on the next meeting’s agenda.

The next stop for Muni’s budget is the Board of Supervisors, who will vote up or down on the whole thing sometime in the next two months. District 5 Supervisor Ross Mirkarimi said before the MTA’s decision that the Board had no collective plan and “is in a completely reactive position.” When asked if he would reject a Muni budget that came before the board containing a fare increase he said “If that happened today I would vote against it.” He also repeated his assertion that Muni should be rigorously audited.

Before the meeting, Director Peter Mezey said that “The MTA Board does have an obligation to initiate long term funding measures.” But he added that “The MTA Board does not have the power to do it by itself. We need to work with the Board of Supervisors, the State Legislature and others.” Prop E has helped to make Muni stronger and to give it more political will of its own. With dedicated funding from parking revenue, a tie-in to the general fund and an independent regulatory body to represent it to the city, it is no longer the forgotten, forlorn and helpless agency that it once was. . In this budget process the board has relied entirely on Michael Burns and Muni staff to decide the funding structure of the agency. Burns and Steuart Sunshine have shown little initiative in pursuing long term strategies, but that is not their job. That is why the MTA Board of Directors was created in the first place. Still, even though the MTA has the authority to put transit specific tax measures on the ballot, it is clear that it lacks the ability or the will to radically alter the structure of the budget entirely on its own

People on both sides of the issue, some recently arrived in the city, said that they found Muni to be a good system, and valued the emphasis that San Francisco put on transit relative to other cities. Their compliments are a sign that Muni is past its worst days but veteran San Franciscans know that there is still a long way to go. It will take the combined strength of organized riders, the Board of Supervisors, the Muni staff, the MTA and perhaps even the Mayor and Governor to shift the current fare to tax ratio of MTA revenue (23% to 16%) in any meaningful way. The Board of Supervisors will have its chance to take a leadership role as it reviews and votes on this years Muni budget. Riders will be watching.