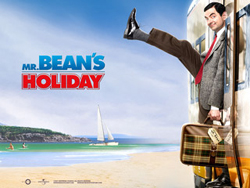 Cannes is still buzzin’ following the Film Festival and lines for movies on the Croisette can still be seen; the Coen Brother’s new film is still being touted; there is talk of the festival being hi-jacked to Spain, and the marketing machine for Ocean’s 13 is still going strong throughout Europe. One film however, truly captures the spirit of traveling to England, France and Cannes this time of year; Rowan Atikinson’s hilarious new film, “Mr. Bean’s Holiday”.

Atikinson’s best known character returns for what he calls, “the final Mr. Bean adventure”. This time Bean wins a church raffle trip to Cannes, and you can just close your eyes and imagine what happens next. When they say “Disaster has a passport”, they aren’t kidding. Warn the town, the Bean is loose! Atkinson is a comic genius, and his incredible “Black Adder” series with Tony Robinson, Hugh Laurie, Stephen Fry and Miranda Richarson, proved he was certainly more than just the brilliant, physical humorist. Atikinson takes on the French, Cannes and the entire film industry in this side-splitting tour de force.

Already playing in London, and due to arrive in the U.S. in August, “Mr. Bean’s Holiday” finds Bean hilariously winning a church lottery ticket to Cannes, as well as a Sony camcorder. Just I had done a week earlier, Bean boards the Eurostar from Waterloo to France, via the Chunnel. Arriving in Paris, the French language proves a real barrier for him, as he struggles to get across the city to catch a train to the south of France from the Gare de Lyon. I don’t need to tell you that every step is fraught with peril for anyone in the company of Bean, who glides through the film knowing only three words of French, “Oui, Non, and Gracias”.

Bean soon finds himself charged with aiding a Russian film director’s missing boy; dealing with a megalomaniacal film director, “Carson Clay”, played by Willem Dafoe, and a beautiful french actress named “Sabine”, played by Emma de Caunes. As we all know, once Bean has an objective, you can’t stop him, you can’t even hope to contain him.

I can’t even begin to name all of the funny bits; Bean’s disastrous lunch in a French restaurant as he attempts to digest his “plate du mer”, was like nothing I’ve ever seen; Bean inadvertently destroys a French WWII movie set about a half a dozen times; finds himself the subject of a country-wide/amber alert type manhunt; joins a gypsy music band following a scene in a plaza that had me crying with laughter; and at one point is even in seen in drag!

Atkinson says this is Bean’s farewell, but I hope it isn’t so. Bean appeared for many years in England before coming to the U.S. and ultimately playing for several seasons on PBS; spawned an animated series with the original cast on MTV and Nickleodeon; live world tours and TV specials, and his last film, “Bean”, where he terrorized America and even touched-up “Whistler’s Mother”, was pure, brilliant, comic mayhem. Nothing wrong with going out on top.

If this is the final Bean, then I must also say adieu, as Atkinson and director Steve Bendelack seem to have done by employing a beautiful French cinematic style, and by paying tribute to a host of French film makers, including the legendary Francois Truffaut.

E. “Doc” Smith is a musician, recording engineer. He is also the inventor of the musical instrument, the Drummstick. He can be reached at http://myspace.com/edoctorsmith