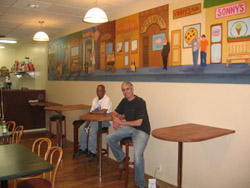 Doug Sonn and Tim Brown, co-workers at Saint Anthony’s foundation, had a couple problems. For one, they could never find anyplace in the Tenderloin to get a decent lunch. And two, they witnessed a whole lot of complaining about the lack of job opportunities and economic strength in the neighborhood, and very few people doing anything about it. Their solution? The opening of Morty’s Deli, which will serve East Coast-style sandwiches and comfort food and will employ recent graduates from Saint Anthony’s job-training program. Sonn and Brown also hope that in the process, they’re able to make an important contribution to the Tenderlion by turning around the rapidly declining Golden Gate Avenue.

In the 1980s, Golden Gate Avenue was a bustling commercial corridor. But the demolition of two SRO hotels with storefronts, the replacement of a bank with a post office, and the relocations of a union hiring hall and fire department headquarters all conspired to cause a rapid decline of the street.

In the past decade, turnaround for the street remained a distant dream, as the patchwork of property owners on Golden Gate remained unwilling to take steps towards improving their community. Massive buildings, vacant for years but not offered up for sale at a reasonable prices, continue to dot both sides of the corridor. Parking lots that could be transformed into housing also remain, promoting blight and providing a place for illicit activity to occur.

Morty’s represents one of the first signs that things could be changing for the Golden Gate corridor Along with a pizza shop next door, Morty’s will attempt to draw customers from the entire Civic Center area, hopefully prompting an economic revival for the area. Strange to think it all began because Tim Brown couldn’t find a good place to get a sandwich in the neighborhood.

It makes sense that a lack of good restaurant options and lunchtime particularly irked Brown. A cook for over six years who graduated from the Culinary Academy, Brown spent time as the Sous Chef at Andalu and Executive Chef at the Last Supper Club.

Brown will be handling all the food decisions and Morty’s and his vision involves a delicatessen that combines East Coast-type sandwiches, soups and salads with the West Coast’s passion for fresh ingredients. Brown will be preparing many of his own meats, and hopes one day his business can become a place where people drop off to buy cold cuts and cheeses for their homes, much like old-style New York delis.

It also makes sense that the lack of economic opportunity in the neighborhood would bug Sonn, who spent the last four years as the Job Training Coordinator at St. Anthony’s Foundation. The job training program helps participants who haven’t been employed for some time to re-enter the workforce by offering them work at St. Anthony’s, providing them with assistance preparing resumes, and counseling them on good interviewing skills.

“It was around the time they were running the anti-panhandling campaign,” said Sonn. “It was this really negative campaign creating all this anxiety among people. What really bugged me about it was here were all these people complaining, but no one was doing anything about solving the issue.”

Morty’s first employee will be a step towards solving the problem. A graduate of the job training program, Carlos Torres, is now employed by Brown and Sonn, and has been helping to set up the business. He’s already seeing the fruits of his labor – the interior of Morty’s, with two spacious booths, a mural extending the length of one of the walls, and a warm, comfortable feeling to it should attract customers wanting a place to relax over lunch.

The area desperately needs strong businesses to revitalize what was once a strong commercial corridor, and Morty’s seems poised to do just that.