More Than an Act of Vandalism 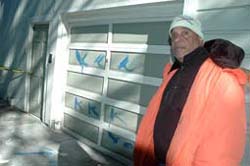 There’s no doubt that for anyone who walks down Noe Street from Duboce Park towards Market, Guy Clark’s rows of fresh flowers are a welcomed sight. It’s certainly a familiar one. Clark has operated his small flower business from the garage at that location for about 25 years.

The other morning Guy arrived at his locale to find “KKK” spray painted across the garage door, and “fuck you” on the sidewalk below. Clark is black and gay. It’s another reminder to the queer community that the problem of racism is alive and well and won’t go away because many people find it inconvenient or unpleasant to deal with.

Two summers ago, when about 75 people a week were marching outside the Castro bar Badlands over allegations of racist carding and hiring practices, some patrons insisted that racism was a thing of the past. “There’s blacks in the Castro, I see them all the time,” one man said to me. “You’re making a big deal outa nothing.”

If seeing “KKK” painted on a garage in the Castro is nothing, then Houston, we really do have a problem.

I grew up at a time not that long ago when the KKK murdered blacks and got away with it. The klansmen went after peaceful civil rights demonstrators and freedom riders (black and white) who marched and organized in the South against America’s version of apartheid. At least one of those freedom riders got killed. Many were beaten. Four young black girls lost their lives in the firebombing of the 16th Street Baptist Church in Birmingham in 1963, one of many such attacks on black churches. The violence was constant. Police in the south did little to stop it. They didn’t really want to.

That legacy of violence and bigotry against blacks in America is recalled every time someone mentions or writes those horrible letters: KKK. Just as the sight or mention of the swastika invokes another shameful chapter in human history. For many of us, KKK will forever be synonymous with slavery, lynchings and segregation in America.

The individual who spray painted KKK on that garage door in the Castro was fully aware of the meaning of those letters. Why else choose that particular graffiti? It doesn’t matter whether he or she did it because Clark insisted that dog walkers pick up after their pets (as the Bay Area Reporter inferred in its January 25 coverage). The perpetrator of what police are calling a hate crime understood the violent threat implicit in aiming those letters at a black man. He or she knew the pain that it would cause to Guy Clark. And to all African Americans. Another reminder of how screwed up things still are in America, in California, even in all-so-liberal San Francisco.

What happened at that garage on Noe street is more than an act of vandalism. It’s a reminder that in America we never learn from the past.