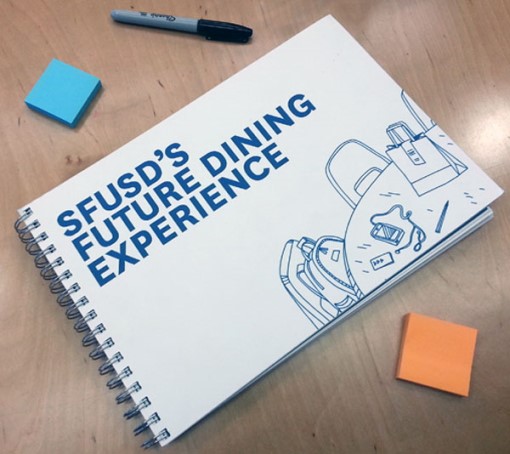 In 2013, San Francisco Unified School District unveiled its plan to update school cafeterias and use technology to encourage more students to choose school meals.  Hopes were high that after many years of lackluster performance, the number of kids eating school lunch would begin to climb.

Spiffy new cafeteria wall graphics and furniture were a high profile part of the redesign. So-called “Smart Meal Technology” proposals to let students use smart phones or school-provided tablets to preorder lunch for speedy pickup, and give feedback on meals, promised to live up to the plan’s ambitious title, “The Future Dining Experience” (FDE).

Gushing media coverage followed the debut of the 200 page plan, but the project has been slow to get off the ground or show results.

The expected jump in the number of students choosing school lunch has not happened.

The Smart Meal Technology connecting student smart phones with school nutrition services, which was supposed to be operational in at least some schools this year, has been delayed until 2016-17.

Now, in another setback for the Future Dining Experience, SFUSD’ Student Nutrition Services director Zetta Reicker is rumored to have resigned.

Reicker was involved with the FDE project from the very beginning. Funded by the Sara and Evan Williams Family Foundation, the plan was developed by design firm IDEO, after months of consultation with students, parents, school staff and other interested parties.

Zetta Reicker worked so closely with IDEO on the project that she moved into the IDEO office near the Bay Bridge for most of the spring 2013 semester. At the time, she was assistant director of Student Nutrition Services (SNS), and was able to devote all of her time and attention to the project.

There had already been a bump in the number of students eating school lunch, as soon as Revolution Foods won the SFUSD school meal contract in December 2012, and replaced the former unappetizing frozen reheated meals with freshly made, more appealing lunches. By March 2013, as Reicker was settling in at the IDEO office, an average of over 23,000 students a day were eating SFUSD school lunch, as compared to about 21,000 who ate daily when reheated frozen meals were served.

Then in June 2013, longtime SNS director Ed Wilkins retired, and Reicker was promoted to director. More management positions were added to SNS staff to help support Reicker in her work, allowing her to continue to focus much of her time on the FDE. This despite the fact that the Williams Family Foundation is paying (through fiscal sponsor Community Initiatives) for two dedicated staff  people just to work on the FDE.

But while Reicker was focusing on “the future,” the existing school meal program languished.

Unfortunately, lunch numbers have been on a slow steady slide since reaching their high in spring 2013. A Request for Proposals to develop the Smart Meal Technology, issued last month, states (on page 4) that SFUSD currently serves 21,000 lunches daily. That’s pretty much exactly the same number as before Rev Foods arrived.

Maybe it wasn’t such a good idea for the Student Nutrition Services director to focus so much of her attention on one project, rather than keeping an eye on all program operations.

Meanwhile, the Smart Meal Technology was one of several areas that was to be the subject of a study by UC Berkeley researchers. They have partnered with SFUSD to determine how effective the Future Dining Experience is at increasing the number of students choosing school lunch, as well as its effect on plate waste (food students dump in the garbage), the amount of fruit and vegetables students consume, and obesity. The researchers will even determine whether the FDE generates enough extra school meal revenue to cover its own costs.

The announcement of this study last spring was good news, as for the first time, it promised to bring actual data to the conversation, instead of just the usual media blather.

As I explained at the time, researchers will track data from a total of 24 SFUSD schools, divided into two groups. One group of 6 middle and 6 high schools (called “intervention” schools) will employ some of the concepts presented in the FDE plan; the other group of 6 middle and 6 high schools (the “control” schools) will not employ FDE strategies.

“We are just starting our ‘baseline’ data collection, measuring plate waste in all 24 schools, administering a student survey, and collecting data on school meal participation. We’ll collect the same measures in the spring of 2016 and 2017 (comparing changes in these outcomes between intervention and control schools), and then again in spring of 2018 in control schools only, to see if they also show change after getting the intervention.”

Note that the baseline data was collected, as Madsen promised, in spring of 2015. This year’s data collection was supposed to provide the first comparisons of how well the plan (including the Smart Meal Technology) was working in “intervention” schools as compared to “control” schools.

But the Smart Meal Technology is not in place at any SFUSD school at the moment; in fact, it doesn’t even exist yet. As a result, the research project will have to be pushed back by a year.

The schedule in the Smart Meal Technology RFP indicates (on page 12) piloting of the platform will now take place this summer and “at a minimum, a limited release to take place during the 2016-17 school year.”

Given that SFUSD Student Nutrition Services knew almost a year ago that the Berkeley research project expected to measure the impact of the Smart Meal Technology in the spring of 2016, one has to wonder why they waited until just a couple of weeks ago to issue the RFP. It shouldn’t take a year to write an RFP.

It’s almost like they aren’t in any rush to get real world data on how the FDE is doing, preferring the unquestioning praise and awards that an unproven project can receive, over the possibly less glorious reality.

Or maybe the delay is just another example of the leisurely pace that SFUSD has adopted in moving forward the FDE plans. Since 2013, just 4 of SFUSD’s over 100  schools have received their FDE-inspired cafeteria makeover. A fifth school – Willie Brown Middle School – just opened in August after being completely rebuilt, and it too has a FDE cafeteria.

At this rate, it will be several decades before every cafeteria is “refreshed.” In other words, a child in kindergarten this year may well graduate from high school, even from college. before his elementary school gets its FDE upgrade.

The Future Dining Experience has lofty ambitions for SFUSD’s cafeterias and meal programs. But the slow pace at which it is proceeding must be frustrating to those who helped develop it.

The plan likes to boast about the “student involvement” that went into its recommendations, and many of the plan’s 200 pages are devoted to full color smiling photos of SFUSD students who happily gave input.

But the truth is that in May, the last of the high school students who were involved in the development of the plan in the summer of 2013 will graduate out of SFUSD. Most of them never got to see their own cafeteria renovated, and none will get to preorder their lunch via smart phone.