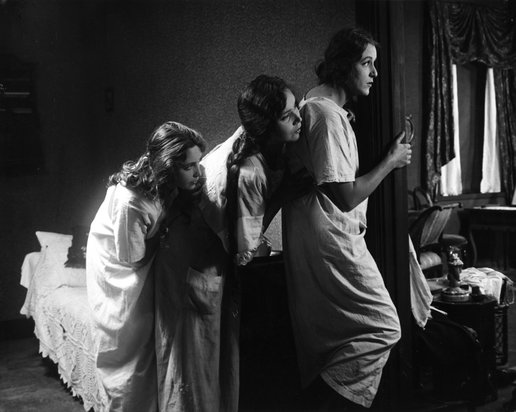 Wu Cheng’en’s Chinese literary classic “The Journey To The West” has been adapted and re-adapted over the decades in film, television, and even comics.  The Ming Dynasty-written fantasy concerns Monk Xuanzang’s journey to India to obtain Buddhist Sutras for the Tang Dynasty Emperor.  Accompanying the Monk are three disciples/magical protectors: the lazy half-pig Pigsy, river spirit Sandy, and the mischievous Monkey King.  Their journey is fraught with dangers, including clashes with demons and monsters.

Dan Duyu’s “Cave of the Spider Women” re-tells one such clash.  Xuanzang’s begging for food takes him to a cave inhabited by spiders who have shifted their forms into that of half-a-dozen beautiful and hospitable women.  The Spider Queen schemes to compromise the Monk’s virtue.  Monkey and his fellow disciples must find a way to free Xuanzang from the spiders’ magical web.

The film’s fragmentary festival presentation comes from the supposedly lost film’s recent rediscovery and restoration by the National Library of Norway.  Even so, a few sequences still display visual deterioration.  Allowing for that problem and the early-stage level of the practical visual effects on display, the reason the film became a tremendous box-office draw in China becomes obvious.  The source material is adapted with enough touches of action and humor to make Xuanzung’s resisting the temptations of drink and the Demons of Carnality’s dance feel mildly tense.   A sword fight pitting Monkey and Pigsy against a couple of sword-wielding spider women and a servant swinging a giant hammer offers satisfactory visual verve.

“Cave of the Spider Women” will not impress those whose fantasy movie diet consists solely of Hollywood blockbusters.  But the curious and the historically-minded will be impressed by the timelessness of the film’s stumping for virtuousness.

Per Lindberg’s “Norrtullsligan” (“The Norrtull Gang” in English) offers a warm portrait of four single Swedish women struggling to survive in a man’s world.

The titular gang’s members are Eva, Emmy, Baby and the film’s unnamed narrator (Swedish legend Tora Teje).  They’re both roommates and members of the business world’s “army of blouses.”   These female office workers deal with problems ranging from flirtatious bosses to poverty wages.  For the four friends and roommates, they generally support and help each other through the challenges of their hardscrabble life.

The politics of Lindberg’s film feels middle-of-the-road to modern eyes.  A “happy ending” is provided by having some of the four women find good husbands.  Yet the film also acknowledges the real-world problems which require women to seek independent work, such as the nameless narrator’s being sole provider for her younger school-age brother.  There’s a wry touch in having the rich aunt character’s conservative viewpoints being the product of cluelessness rather than wisdom.

“Norrtullsligan”’s version of comic class politics pretty much begins and ends with the rich aunt.  A push for a strike among the underpaid women of United Enterprises gets quickly crushed by the company manager without repercussions for the plutocrat.  Even though the nameless narrator sings the pro-union song “Sons of Labor,” her economic suffering is muted in the story by her dedication to hard work and the paternalism of her kind-hearted boss and her rich aunt.  Even actions that would be considered sexual harassment nowadays are forgiven in the story because the perpetrator is shown to be a lonely man.

Lindberg’s film will never be the cinematic equivalent of a Brechtian drama.  But Teje’s performance as the maternal member of the gang makes her character more sympathetic than expected.  The movie’s lack of judgmentalism for its independent women characters does render the film still watchable.

The “Avant-Garde Paris” program will admittedly be a slog for the “entertainment only” crowd.  But the cinematic language used in the program’s two short films displays a freshness that bridges the gap of decades.

Surrealist Man Ray’s cinematic poem “Emak-Bakia” will obviously be the more enigmatic of the film duo.   As the shot of the movie camera hints, what’s captured in the fluid amoeba-like world he depicts on film is a creation of cinematic technology.  But the images he presents reject the assumption of film as only a mirror of reality.  The light glinting off the dizzyingly rotating objects seen onscreen create a beauty that can only be experienced instead of tamed by words.

The film’s loosening of familiar objects from their mundane settings feels like a revolt against arthritic order.  An electronic ticker billboard message looks ghostly.  A drive down a country road feels almost like a reckless act of suicide.

In the midst of Ray’s cinematic watery universe, women appear to be islands of calm certainty and even playfulness.  Yet as the sleeping woman with open eyes painted on her closed eyelids shows, that supposed stability is also an illusion.

Compared to Ray’s cinematic enigma, Dimitri Kirsanoff’s short “Menilmont” feels more straightforward.  After their parents are horribly murdered, two unnamed sisters grow up and leave their small village to work in the city.  Their poor but simple relationship gets upended by the intrusion of a slick hustler.

Kirsanoff inventively uses superimposition to visually convey a sense of city life as a fast-moving river.  The swift cars and noises of the city sweep people along in its flow until circumstance allows them to rest on points of calm, such as sexual passion.  But when one sister finds herself in socially isolating circumstances, the formerly enjoyable river of social energy becomes a malicious cataract.

“Menilmont”’s sexual politics diametrically opposes the period’s punitive sexual mores.  Rather than condemning the two sisters for following where their sexual desire takes them, Kirsanoff lets them achieve an emotional state of grace.