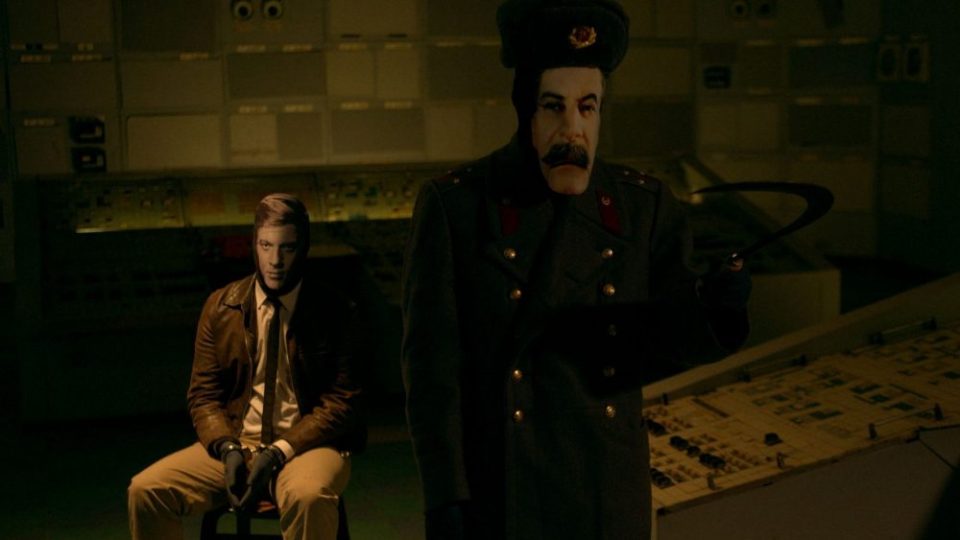 There are many reasons the San Francisco Independent Film Festival (aka S.F. Indie Fest) is such a local cinematic treasure.  One such reason comes from its prizing unique cinematic sensibilities over “commercially viable” films that have been focus group-tested to death.  Perhaps only Slamdance would join S.F. Indie Fest in its willingness to show Miguel Llanso’s inventively berserk “Jesus Shows You The Way To The Highway.”  This unabashedly lo-fi and entertainingly demented film offers 1980s-style video games, a use of a certain well-known Caped Crusader that would send Warner Entertainment lawyers’ blood pressure spiking, and Cold War espionage paranoia chased down with pop culture references from that period.

Hunchbacked black dwarf D.T. Gagano is a CIA agent who does cyberspace espionage missions inside the supercomputer system known as Psychobook.  He and partner Palmer Eldritch continually battle a computer virus known as Soviet Union. Gagano wants to resign from the CIA and open a kickboxing studio with his Rubenesque girlfriend Malin.  However, the proverbial One Last Mission ends with Palmer being co-opted by Soviet Union’s creator Stalin and Gagano’s consciousness trapped in Psychobook’s cyberspace. Or is Gagano actually stuck in Betta Ethiopia?  Or, for that matter, is Gagano actually a pizza chef?

Yet despite being set in a world undreamed of by Cold War pop culture, the technology seen in the film is deliberately retro compared to our present day.  The goggles Gagano and Palmer use to enter Psychobook’s cyberspace have the bulky appearance of brick-sized first generation cell phones. A portable television that plays a crucial role looks like leftover tech from the 1960s.

Llanso tosses in a couple of very obvious hints that what’s being seen on screen should definitely not be taken at face value.   Classic science fiction fans will recognize the name Palmer Eldritch as a call out to Philip K. Dick’s famed drug dealing character.  Like Eldritch’s Chew-Z, The Substance being peddled by Llanso’s Palmer brings its consumers closer to “God.” With Gagano, by contrast, could the D.T. in his name be a reference to delirium tremens?  One symptom of that affliction just happens to be seeing hallucinations.

In fact, that uncertainty about Gagano’s real identity and life forms the film’s spine.  Two Betta Ethiopian military officers refer to Gagano as The Messiah. Is Gagano’s operating an oceanside pizza truck with Malin a wishful dream or a recollection of his real past?  That uncertainty is compounded by the apparently real sight of Malin cheating on Gagano with Palmer. On the other hand, it’s safe to say the definitely unreal moments include seeing a guy lick a credit card and have his eyes flash red or Gagano trying to avoid humanoid flies firing death rays.

Some viewers with a low tolerance for cinematic craziness will throw up their hands in confusion long before the movie ends.  However, for the viewers willing to just abandon linear and logical thought for the sake of watching Llanso’s inventiveness at work, this will be an oddball delight.

Incidentally, the film’s unconventional title actually does make sense.  But the game viewer won’t understand why until they reach the movie’s end.

Captain Seafield is obsessed with killing the monster that slew his father.  To that end, he’s assembled a Team Of The Century to help him plumb Lake Michigan and put an end to the creature.  The team consists of weapons expert Sean Shaughnessy, sonar expert Nedge Pepsi, and ex-Navy seaman Dick Flynn. Despite what passes for the best efforts of Seafield’s team, the Captain eventually winds up being left alone to deal with a phantom lake ferry, the pledging of his soul, and his ultimate confrontation with the titular monster.

Tew certainly achieves the feel of the film genre he’s parodying.  The music soundtrack sounds like a mix of bad 1960s-1970s action movie music, moldy 1940s suspense music, and even a brief Pogues-like song “Dear Captain Seafield.”  The cinematography has plenty of unnecessary close-ups and double exposures. The hand-held camera work will give the unwary viewer nausea. The special effects, particularly those used for the climax, have a cheap and tacky look reminiscent of low-end films of at least six decades past.

The introductions of the Team of the Century’s members look like a hack director’s attempt at conveying coolness.  Cheap animation shows Shaughnessy’s ridiculous facility with weapons. The weird camera angles used to show Pepsi doing her sonar thing can’t hide the lameness of her role.  Tew also misses a visual joke in not giving Pepsi what used to be known as Coke bottle glasses.

The various operations by Seafield and his team mix macho bluster and grade-school sexual innuendo.  Attempts to slay the monster get assigned such names as “Operation Annihilate” and “Operation Master Baiter.”.

Yet what Tew forgets is what made those old cheap movies ripe for ridicule.  The people who made them were primarily concerned with getting their movie product into the theaters as quickly as possible  So what if the sets look really cheap or the plot logic has holes big enough to drive an 18-wheeler through them? As long as the public got what they think they paid for, it’s all good.  “Lake Michigan Monster” comes across as being more concerned with demonstrating its creator’s cleverness than in entertainingly mocking the genre’s tropes.

The film also clearly forgets that brevity is your friend in making a parody work.  If a current joke falls flat, a dozen possibly better jokes can come along later. Tew, by contrast, too frequently lets a joke run too long.  A life or death moment gets interrupted by grousing over the state’s insanely restrictive laws regarding the closure of bars. The non sequitur is fine, the running the non sequitur into the ground not so much.

Tew’s film does achieve a few moments of wonderful visual absurdity, such as seeing how an entire army fits onto one small speedboat or seeing a can and string convey images from a chaotic battle.  But far too often, there is too little humorous absurdity to liven the film’s far too many slower bits.

The film’s biggest problem lies in Tews’ playing Seafield.  Yes, his film worked off a very small budget, so having him play the lead character made sense in one way.  But in terms of making Seafield a convincing comic character, Tews never comes close. He lacks the acting chops to make his character’s craziest assertion sound logical.  John Cleese famously convinced audiences that a banana was a lethal weapon. Tews can’t even make a platter of fish sticks sound like Michelin-star worthy dining.

“Dear Captain Seafield” is admittedly a catchy song.  But that’s the only reason to spend time with “Lake Michigan Monster.”

Indie Fest Closing Night Film “Alice” redeems a familiar story by centering its dramatic focus on the emotional growth of the title character as well as celebrating the power of female friendship.  The MGTOW crowd will hate Josephine Mackerras’ moving film, which is a recommendation in itself.

Alice Ferrand (a stunning Emilie Piponnier) lives a comfortable life in her apartment with husband Francois and son Jules.  But one day she gets a spectacularly unpleasant surprise. Their apartment is bare weeks away from foreclosure, and their finances are utterly trashed.  Dear old Racine-quoting Francois had secretly stopped making payments on the bank loan for their apartment. Instead, all their money has been blown on high-end sex workers.   Alice’s husband conveniently disappears at this moment. In a last-ditch effort to save her home, the desperate woman becomes a high-priced escort herself to save the apartment and ultimately herself.

Mackerras’ film instantly distinguishes itself by taking a more nuanced view of sex work than quite a few prior cinematic treatments of the subject.  As the film makes clear, there’s a huge difference between people who get thrust into sex work thanks to human traffickers and people like Alice who enter the field to make some much needed money.  Unfortunately, as Alice’s mentor and friend Lisa points out, the law and society prefers to take a “pigs is pigs” approach when sex work is considered. Both types of sex work are blindly lumped together under the prostitution umbrella.

The proverbial male gaze will be thankfully frustrated by how Mackerras films Alice’s on the job sex scenes.  Her camera never lingers on anyone’s naked body, whether it be the title character’s or her clients’. It’s clear that this is a business exchange involving flesh, money, and emotion.

Yet at the same time, the film allows space to show the more human side of Alice’s escort work.  Her first assignment turns out to be a farce of dropped money and accidental penis whipping by condom.  A later assignment with an older English-speaking man feels like a painfully awkward attempt by the man to reaffirm his sexual prowess.

Alice’s entry into escort work is eased by the support and mentorship of veteran escort Lisa.  The more experienced woman sees potential in the desperate housewife’s good girl looks. She passes along to Alice practical advice on getting the money up front and preparing a condom for use before the job.  The key turning point in their relationship comes when Lisa helps Alice process her first post-assignment feelings. The newbie escort gets reassured that her feeling the mundanity of completing the job is actually a normal reaction.

Guilt or shame at providing sex for money is something that the traditional values crowd take as a given.  That neither Alice nor Lisa feel either reaction over the course of the movie will cause a meltdown among that crowd.

Then again, the old social mores traditionalists represent deserve the raking “Alice” inflicts on them.  Alice’s mother’s attitude that her daughter’s problems with Francois is just part of the normal hardships that comes with marriage shows where the title character picked up her self-blindness.  Francois’ first attempt to crawl back into Alice’s life involves a bunch of roses and a declaration that he loves her, which feels like pathetic recompense for the financial hole he had left her in.

Mackerras makes no bones about showing that despite the surface charm he exudes, Francois is at his core a pathetically weak man.  He avoids taking responsibility for endangering the family home. His return into Alice’s life feels birthed from a belief that since Alice hasn’t lost the apartment, he didn’t screw things up as badly as he thought.  He tries to shame Alice for accepting money for sex without acknowledging his role in making that route necessary.

Piponnier’s incredible performance will make the viewer cheer on her character’s ability to meet and rise above the challenges facing her.  The traditional supportive wife and mother role Alice was brought up to accept turns out to be a mask which smothered her ingenuity and growing self-confidence.

“Alice” delivers a crowd-pleasing tale of personal liberation from narrow social confines.  If the film also sparks discussions about re-thinking how society should treat sex workers, so much the better.