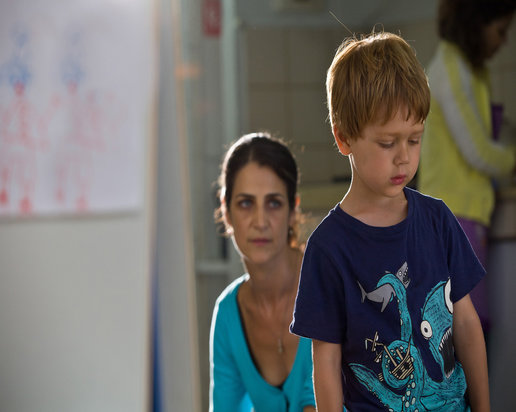 Nothing and everything happens to Lyoshka, the titular mail carrier in veteran Russian film director Andrei Konchalovsky’s new film “The Postman’s White Nights.” The rural lakeside community along Russia’s Lake Kenozero may be a slow and lethargic place for adults. But what few children are there find wonder in the countryside. The old age pensioners find the slow pace of life along the lake suitable for their existence.

Lyoshka’s place is somewhere in the uncomfortable social middle of this community. He’s young enough to eagerly spin tales of a water witch, yet old enough to mourn the remains of his old school. His job may seem pointless in the age of e-mail, but a loss which undermines his ability to do his job turns into a serious crisis.

As Lyoshka goes about his rounds delivering pension money, his main joy is keeping in touch with the pensioners and oddballs who live in the community. An ex-alcoholic, the postman most empathizes with the community drunk known as The Bun. Lyoshka’s job also gives him an excuse to see single (and still pretty) mother Irka.

The languid and repetitive visual pace Konchalovsky uses to capture life in the Lake Kenozero community helps viewers understand why Lyoshka may find the lifestyle comforting. Irka’s dissatisfaction with life by the lakeside comes partly from the pronounced age difference between her and the rest of the community’s inhabitants. The other part of that dissatisfaction probably comes from the reason she can’t develop the social ties Lyoshka takes for granted.

It’s telling that despite references to e-mail, there is nary a personal computer to be seen in the Lake Kenozero community. That absence speaks to a choice that Konchalovsky metaphorically implies Lyoshka must make between dying slowly with the pensioners and gambling on an unknown future. A nicely constructed shot involving a rocket launch visually summarizes Lyoshka’s future.

Stanley Nelson’s documentary “The Black Panthers: Vanguard of the Revolution” thankfully goes beyond a “just the major events” account. He challenges today’s political apathy by showing how the Panthers’ youth didn’t bar this 1960s black liberation group from becoming an international sensation. The Panthers’ shortcomings such as their leadership’s personality clashes and their naivete regarding FBI undermining of the group are sincerely acknowledged. But those faults are outweighed by the Panthers’ inspirational, political and cultural impact on the world.

The premise of Nadav Lapid’s new drama “The Kindergarten Teacher” may sound like the seed of an exercise in eye-rolling preciousness. Lapid’s film asks “what if a 5-year-old could create emotionally mature poetry?” That question alone would foreshadow in lesser hands the application of the “my 5-year-old displays better artistic talent” canard to the world of verse-making. What distinguishes “The Kindergarten Teacher” is its support for the act of creating art in a world that devalues anything that doesn’t turn a profit.

Nira, the titular pedagogue, seems at first to adopt the apparent nurturer of talent role. She’s the one who takes seriously the realization that kindergarten student 5-year-old Yoav can create moving poetry far beyond his years. Her reading samples of Yoav’s poetry to others convince her that her judgment of Yoav’s talent is correct.

Yet convincing other people of the potential of Yoav’s talent turns out to be a task exceeding Nira’s capabilities. Yoav’s successful father has very personal and very immovable reasons why he won’t encourage his son’s poetic gift. A public poetry reading turns into a disastrous mocking of the boy. Only when Nira and Yoav’s nanny claim the boy’s work as theirs does the boy’s talent get truly appreciated.

The kindergarten teacher’s motivations for helping grow Yoav’s talent never come across as entirely altruistic. Nira is herself a budding poet, yet the only sample of her work that we hear feels clichéd and leaden. Passing off Yoav’s poems as hers gives her access to a sense of validation absent in her life. Even as Nira introduces the uncomprehending boy to other poets’ thoughts, there are times when her eagerness to record yet another of Yoav’s poems appears obsessively greedy. The most notorious moment comes when she leaves the boy unattended in the ocean as she runs to fetch pen and paper.

Lapid’s film suggests a couple of possible reasons for Nira’s obsession with Yoav. Empty nest anxiety is a strong likelihood. Nira’s own children have gotten to an age where they’ve become self-sufficient. Her choice of profession seems like both a product of natural talent and a feeding of her need for having children dependent on her. Alternately, there’s the fear of obscurity. The film does not show the teacher reading verse that she created to her poetry classmates. Could it be that Nira’s other poems also display an equal lack of talent? Yoav’s gift certainly has done nothing to spark any sort of creative fire in his teacher.

Generally, the film works by keeping Nira’s motivations ambiguous. No revelatory monologues are offered to rationalize or explain Nira’s actions. Instead, the viewer is left to consider whether they could show wiser behavior than that displayed by the kindergarten teacher. One would hope viewers would demonstrate far more integrity than Nira does with a half-truth that allows her more quality time with Yoav.
Lapid avoids treating the film’s lead character as an utter villain. Preserving a genuine artistic talent is certainly a laudable goal. There’s even something tragically romantic about Nira’s figuratively sacrificing her life for the sake of shielding Yoav’s talent. Yet the film’s final shot of Yoav hints all of Nira’s efforts are eventually in vain. The world offers baubles too tantalizing to ignore.
(“The Black Panthers: Vanguard of the Revolution” has successfully Kickstarted funds for a theatrical run prior to its scheduled 2016 PBS screening. “The Kindergarten Teacher” screens at 8:45 PM on May 5, 2015 at the Sundance Kabuki Cinemas (1881 Post, SF). For further information about these films and to get advance tickets, go to www.sffs.org/sfiff58/ .)