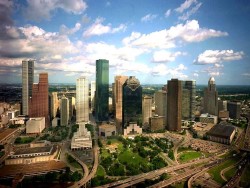 With LGBT activists focused on marriage equality fights in New York and New Jersey, Houston could either elect its first openly gay Mayor on December 12th – or re-affirm that bigotry is alive in Texas. City Controller Annise Parker has already endured her share of anti-gay attacks in this race, but now a major right-wing kingmaker has jumped in the fray. Steven Hotze, who ran the infamous “straight slate” of City Council candidates in 1985 and continues to have a large following of Houston voters, has endorsed Parker’s opponent (Gene Locke) by sending out a mailer of preferred candidates. But Locke has added fuel to the fire by refusing to reject this endorsement at a debate on Monday – in stark contrast to Barack Obama, who in a debate last year agreed to “reject and denounce” the endorsement of Louis Farrakhan. Meanwhile, Bay Area activists are helping Parker’s campaign with a fundraiser tonight at the Parc 55 Hotel (near Powell and Market), starting at 5:30 p.m.

Steven Hotze and his consultant, Allen Blakemore, have a history in Houston politics of pushing anti-gay causes. They’re more subtle than Dave Wilson – who sent his own mailer attacking Parker for her sexuality – but are more influential with a bloc of the city’s conservative voters who are now being asked choose between two Democratic candidates.

In 1985, Hotze ran what he dubbed a “Straight Slate” of conservative candidates – who targeted eight City Council incumbents that had supported gay rights. His name is anathema in liberal Democratic circles of Houston.

Now, Hotze and Blakemore have publicly endorsed Locke. In a mailer sent on behalf of “Conservative Republicans of Travis County,” they endorsed seven candidates in local races – ranging from Mayor to City Council – on the December 12th ballot. The mailer noted that all seven of their opponents are “endorsed by gay lesbian political action committee.” Some of the other endorsed candidates have repudiated this, but Locke so far has not.

Parker has spent much of her campaign avoiding the label of a “gay” candidate, but the level of hate in this election has made it inevitable. Even politicians who are supporting Locke are disturbed that unsavory right-wing elements are endorsing his candidacy – and one ally wrote a blog post asking him not to associate with them. But Locke was meeting with Hotze and Blakemore even before he qualified for the December run-off seeking support, and is now benefiting from their formidable right-wing voter bloc.

The issue took center stage earlier this week at a candidate’s debate – when Locke was asked by a reporter if he accepted the endorsement of right-wingers who were motivated by anti-gay animus. Locke danced around the question, but ultimately said he welcomed anyone who believed he was the “better candidate” – if they were not solely motivated by hate. Of course, that means he’s okay with bigots endorsing him if for other reasons.

The unspoken reality, however, is that Locke needs this support to beat Parker in the run-off election. Both candidates are Democrats, and Republican voters will decide this race. Whether it’s more moderate, fiscal Republicans or the “teabagger” wing of the Party vote will determine which candidate wins. Local right-winger Dave Wilson, who sent out an very hateful piece on Parker a few weeks ago, told a local TV station that he wished to “energize the conservative Christian base.” Wilson has since made a $2,000 contribution to Locke.

The election is next Saturday, and December run-offs are brutal when it comes to voter turnout. Right-wing Christians have a history of turning out, and they thrive on it. As Paul Weyrich infamously said at a conservative conference in 1980, “I don’t want everybody to vote.” It will be up to progressives – and the LGBT community – to rally behind Parker to avoid this.

ADDENDUM: It has come to my attention that the mega-churches in Houston are doing a mobilization against Annise Parker, and trumpeting the fact that the expected 10% turnout in this race will give them a disproportionate impact. A bulletin from the Houston Area Pastors Council can be >viewed here. One of these pastors has gone so far as to call it a “morality problem” if Houston gets a lesbian Mayor. We cannot let this right-wing onslaught hit us in Houston, like it did in Maine. It’s time to fight, and to fight back hard.