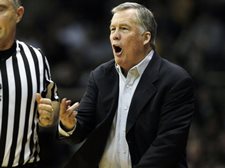 Mike Montgomery seemed to be just what Cal needed to turn its basketball program around. But Cal fans won’t be including their team when filling out brackets for March Madness, as the Mighty Monty has struck out.

Mike Montgomery is one of the greatest college basketball coaches in history. His remarkable success at Montana and Stanford made him the best hope for taking Cal’s basketball program to the next level.

But this year’s 19-13 season, which ended with the team losing five of its last seven games, shows that Montgomery has hit a wall. Cal’s program has stagnated, with players not improving after arriving and with a once great recruiter unable to attract top talent to Berkeley.

And there’s no reason for optimism. In fact, I wonder if Montgomery even wants to spend another year with a team that may again end up in the NIT.

Sadly for Cal, the basketball team’s failure comes as the football team just finished its worst season in recent history. Cal sports programs are drowning in debt, and Sandy Barbour, the Athletic Director responsible for this fiscal misery —she gave ex- football coach Jeff Tedford a $5 million plus contract which she had to buyout for $15 million—is still in her job.

If Cal football gets off to another bad start this fall, there will be more empty seats than fans in Cal’s updated stadium. And don’t expect fans to buy Cal basketball tickets in advance, given the lack of progress since Monty’s 2008 hiring.

How is it that Montgomery recruited so many players to Stanford who went on to become first round NBA draft choices, but can’t recruit a single future star to Cal?

Has the game passed him by? Or is there something about Cal that leaves it unable to attract quality basketball players?

Whatever the cause, the great Monty is not the answer. Cal needs a young coach who can recruit top talent. Monty deserves to stay at Cal as long as he chooses, but he has to know that his program isn’t progressing.

If I were a betting man, I’d put my chips on Monty walking away after this season.

Randy Shaw is Editor of Beyond Chron. He was thrilled when Cal hired Monty in 2008, assuming that the Bears would soon have their own versions of Mark Madsen, Casey Jacobsen, the Lopez and Collins brothers and other Stanford stars recruited by Monty who were high NBA draft picks.