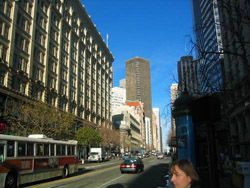 In the next 45 days, the San Francisco Board of Supervisors will decide who will live in Mid-Market during the next fifty years, what the neighborhood will look like, and what kind of businesses will operate. The current Mid-Market Plan envisions a wall of upscale condos, minimum on-site affordable housing, no dedicated arts space, and the demolition of existing theaters, with a few nonprofit housing projects sprinkled on Market between 8th-10th Streets. We all know that’s not the kind of city San Franciscans want. But if people get involved, we can create a Mid-Market neighborhood we do want, with the cultural vitality and openness to people of all incomes found in the Mission or Lower Haight.

Since the 1970’s, corporate interests have reshaped San Francisco by leveling the Western Addition’s once thriving African American community, demolishing 5000 SRO units and evicting thousands of working-class residents from SOMA, and by turning the city’s downtown into a sterile venue for highrise office buildings. Corporate San Francisco has also succeeded in transforming the huge undeveloped acreage of Mission Bay into a center for biotech and medical research, and has carved out Rincon Hill to be home for wealthy condo buyers.

Now corporate San Francisco has its sights set on Mid-Market. This neighborhood, located between the low-income communities of the Tenderloin and Sixth Street, is the linchpin of a plan to extend the look and feel of downtown and Rincon Hill through the Civic Center. Corporate interests failed in the 1980’s to erase the Tenderloin by moving Union Square’s demographics southward toward City Hall; Mid-Market now represents their last and best hope to radically transform the Central City area.

By the end of June, the San Francisco Board of Supervisors will decide which vision for the Mid-Market neighborhood to implement. If the Board approves a Mid-Market Redevelopment Area, it must then vote on what the official Plan for the Area will look like.

The corporate Plan uses luxury development along Market to create a firewall between the Tenderloin and Sixth Street neighborhoods. The Plan does everything but post sentries along Market Street to keep away lower income people and culturally diverse activities.

The community Plan for Mid-Market is still being formulated, and input will be sought at a planning forum sponsored by Beyond Chron this Thursday at noon at 1310 Mission Street. But based on feedback from area residents, arts groups and businesses, it is clear that people want Mid-Market to be more like the Mission and Lower Haight than like Rincon Hill or downtown.

What makes the former neighborhoods, as well as Clement Street, 24th Street in Noe Valley, Castro Street, Columbus Avenue in North Beach and Irving Street in the Inner Sunset successful? Each has an active street life, attracts both residents and visitors of all income levels, has a diverse selection of cafes, retail shops, bookstores and restaurants, and is accessible by public transit.

Why shouldn’t the Mid-Market neighborhood be designed to follow the model of San Francisco’s most successful areas, rather than places that are dead on evenings and weekends and that exude a sense of exclusion?

The critical point is for Mid-Market to become a place where people of all incomes want to hang out, either in cafes, restaurants or cultural establishments. This is accomplished by ensuring each block along Market includes separate housing for tenants at lower income levels, rather than allowing private developers to transform the area between 5th-8th Street while ghettoizing low-income housing between 8th-10th Streets.

Including even 25 “affordable” units in an upscale condo development will do nothing to impact the physical look and feel of Mid-Market. Since these units will be for purchase, not rental, they will not be affordable for virtually any current residents of the area.

Far better is to require private developers seeking to build condos in Mid-Market to erect separate affordable rental buildings on the same block. Combining the affordable housing requirements for a few projects would fund new affordable rental housing throughout the heart of the district.

Similarly, we do not need a Mid-Market Arts program that, as in the current Plan, gives density bonuses to condo developers in exchange for funding upscale art installations.

Art and cultural uses in the Mid-Market are entitled to a dedicated, ongoing funding source, which would help subsidize the revitalization of three either closed or unproductively operated theaters in the area. The Roxie, Castro and Red Vic have been great assets to their neighborhoods, and these theaters can create a similar level of nighttime excitement and late night cafe and restaurant business in Mid-Market.

Since Mid-Market is accessible from everywhere by public transit, the retrograde priority on parking garages in the current Plan must be tossed. The last thing San Francisco needs is more traffic on Market Street.

Many younger San Francisco activists feel they missed out on the big struggles that shaped the city’s future. But no struggle in years has been as important to a progressive vision for San Francisco than the fight to save the Mid-Market from a corporate takeover.

The heart of the Central City is at stake. Join us in working for victory.