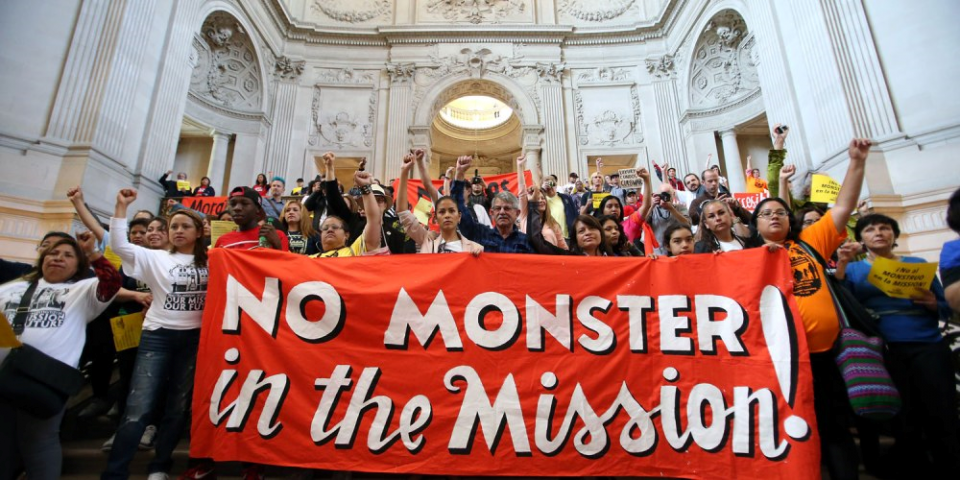 Mission District Housing Wars are Back.

After an owner/developer lawsuit that led us to conclude the project had “collapsed” (“After Slaying Monster, Activists Seek Affordable Housing,” August 25, 2015), a proposed 10-story condo tower for the northeast corner of 16th and Mission has been revived. The Plaza 16 Coalition (over 100 groups), which calls the project the “Monster of the Mission,” held a rally this week as tensions between the parties escalated.

In October 2013 former SF Business Times and now SF Chronicle  reporter JK Dineen quoted me saying the project was out of scale for the neighborhood, which “is characterized by smaller storefronts and doesn’t have a lot of monolithic, full-block projects.” While many support such large projects on key transit corridors, it remains out of scale in connection to nearby properties.

I was not asked about the affordability issue, which remains the Plaza 16 Coalition’s chief reason for opposing the project. Plaza 16 wants a 100% affordable project on the site. Other controversial Mission projects—such as the “Beast on Bryant”— ultimately were approved after working out deals with the community by adding more affordable housing.

For several reasons, a similar deal may not be achievable here.

Affordable Housing in the Mission

The Mission now has so much affordable housing going that the city should now instead prioritize affordable housing in the Richmond, North Beach, Inner Sunset and other neighborhoods.  If the city wants the future working and middle-class to live in these communities, it needs to expand housing opportunities there.

The Mission’s large affordable housing pipeline means that opponents of the Monster feel less compelled to back the project in exchange for greater affordability. Plaza 16’s position of “100% affordable housing on the site or no project” seems less a bargaining stance than a line in the sand.

Developer Maximus Real Estate Partners has inexplicably included Larry Del Carlo on its team. Del Carlo was the driving force behind the nearly decade long upheaval at Mission Housing Development Corporation (Mission Housing), where he used his position as Board President to wreak havoc with staff. Mission Housing’s revival did not begin until Del Carlo departed, and the loss in affordable housing production in the Mission under Del Carlo is a troubling legacy of his tenure.

Adding Del Carlo to the 16th and Mission team was akin to Maximus directly insulting MHDC as well as the Plaza 16 Coalition. Developers usually involve people to advance their projects, not intensify opposition.

Maximus also retained Jack Davis. Davis has become a lightning rod for the Plaza 16 Coalition, as the press release for its April 11 rally claimed that he was guilty of “harassment and intimidation.” A conflict at the recent Sunday Streets event escalated between Davis and other representatives of “Mission for All,” a group set up by Maximus to boost community support for the project, and staff and youth associated with the Mission organization, PODER.

I first met Jack Davis in 1979 when I was volunteering for the Mike Hennessey for Sherriff campaign and he was the campaign manager. I got to know him better when we were running rival campaigns in 1992 and he accused us of taking down his campaign signs from bus shelters. We then worked together on four ballot measures for the November 1994 election that we linked as “4 Our Neighborhoods.” Davis and I were joined in coordinating the campaigns by Joe O’Donoghue of the Residential Builders Association and Calvin Welch of the Council of Community Housing Organizations.

So I knew Jack well before we put together a deal to save rent-controlled housing at Trinity Plaza. He was semi-retired for a while and living outside the city, and now is back.

Jack Davis plays hard and he plays to win. It is not surprising to me that he has people organizing support for the Maximus project, because there are a lot of people who will support any project that changes the scene at that  16th and Mission corner. Davis told me this week that his group has already collected 11,000 supporting letters. He also has crime statistics showing that 56% of the entire district’s drug arrests, 40% of its robberies, and nearly 40% of the Mission’s overall crime happen at 16th and Mission.

Those are dramatic numbers. And while these crime stats apply to all four corners, the northeast corner— where Maximus proposes to build–has long been the chief source of complaints.

Davis is building his case, and opponents of the Monster need to respond on the merits. Given the problems at the site, winning public support may require promoting an alternative project rather than simply saying no to Maximus.

A Planning Commission hearing has yet to be scheduled. Planning may approve it solely because the project is consistent with the zoning, but it will then be appealed to the Board of Supervisors where majority support is far from assured. Should Maximus win at the Board, the type of ballot measure that killed 8 Washington will likely follow.

In a November 2018 election such an initiative could easily win, killing the project.

Maximus faces a very steep challenge here. If the project proceeds under its current plans, this could be one Mission project that never gets built.

Randy Shaw is Editor of Beyond Chron. He discusses the Mission’s long  failure to add to its affordable housing stock in his book,  The Tenderloin: Sex, Crime and Resistance in the Heart of San Francisco