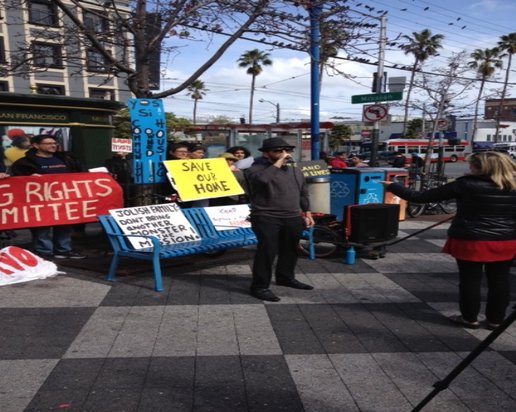 March 2 saw another eviction protest in San Francisco’s Mission District. This eviction targets the Station 40 collective, whose eclectic programming has included a workshop on “The Art of Resistance: Anti-Gentrification Screen Printing.”

According to the tenants, the Jolish family that owns the building first expressed interest in selling right after a 350 unit market rate development was proposed for the nearby 16th and Mission BART station. The Jolish’s reportedly own buildings on both sides of Station 40, and want to sell all three parcels to a developer who will demolish the existing structures and build a massive development.

This latest eviction attempt goes to the very heart of what many believe the Mission neighborhood has been about for the past four decades—and what its future should be.

As noted, what makes the Station 40 eviction a lighting rod is its location at the same 16th and Mission intersection where activists are opposing a proposed 350-unit luxury apartment building. Vowing “No Monster in the Mission,” activists see the market rate project as causing precisely the type of displacement impacts confirmed by the Station 40 evictions ( there will be a major march against the project on March 4 at 5:45, leaving from 3721 18th Street).

Station 40 residents and supporters want the Jolish family to sell the property at market value to the SF Community Land Trust, which is working with the Mission Economic Development Agency (MEDA) to make this  happen. But if the owners’seek to sell all three parcels together, that win win solution will not occur.

Like the evictions of tenants at 1049 Market Street now in its second year, Station 40 will be a long fight. I suspect much longer than the owners realize. My very first jury trial back in 1983 involved a tenant being sued for living in a commercial space. The jury had no sympathy for the landlord trying to evict a tenant for residential use after they had allowed it for years. The Jolish’s attempt to evict Station 40 on similar facts  is also unlikely to succeed.

There’s nothing new about threats of displacement and eviction in San Francisco’s Mission District. The Mission was on the front line of gentrification battles when I lived there from 1980-1983.

But those battles involved owner move-in evictions and renovation schemes designed to displace longterm tenants. Back then, there was so little new market rate development proposed that the biggest change to the Mission landscape in those years was the construction of nonprofit family housing on the entire block of Bartlett between 22nd and 21st streets.

In those days, Mission Housing Development Corp. was the leading nonprofit builder of new affordable housing. As a result, the Mission got more new units than other neighborhoods.

Mission activists in the 1980’s could have downzoned the neighborhood to prevent any non-residential development and to reduce heights and bulk on new projects (such as that now planned for 16th and Mission). That’s what the Tenderloin did when it won a major neighborhood rezoning in 1985.

But Mission activists had a different vision. They sought to expand light industry in  the neighborhood, rather than ban its expansion by limiting non-residential development. That decision later allowed dot-coms to proliferate in the Mission on the grounds that they qualified as “light industrial” under the Planning Code.

Unlike nonprofit housing groups in the Tenderloin, Mission groups failed to aggressively acquire nonprofit housing sites during the dot-com boom and housing bubble. Mission Housing’s staff implosion and subsequent defunding by the city was not accompanied by a new nonprofit engine for acquiring affordable housing sites in the neighborhood. While Mission activists attack the disproportionate level of market rate development, this is inevitable when nonprofits are not aggressively purchasing land.

A Strategy for the Future

Mission activists have focused on opposing projects. From the fight to stop the opening of a Jack Spade retail shop to ongoing battles against new market rate housing, those seeking to preserve an economically diverse Mission are constantly on the defensive.

While defensive battles are often unavoidable, they need to be accompanied by a pro-active approach. Stopping new market rate housing, or the interim moratorium floated by Supervisor Campos, do nothing to add to the Mission’s affordable housing supply.

Activists should consider pushing the city to pour nearly all available affordable housing funds into Mission land acquisition. The Mission is the neighborhood most impacted by both non-fault evictions and new market rate housing. The only way to create the balance activists seek is to target public housing resources to that neighborhood.

Had this strategy been invoked in the late 1990’s, the Mission would have far more affordable housing. The reason Mission affordable housing has lagged is that the nonprofit group that was originally established to lead Mission efforts stopped doing so and was not replaced with an equally committed new provider.

Is it too late for this strategy to have an impact? Are public dollars too scarce and Mission land prices too high for nonprofits to make a dent on the problem?

I would say it’s never too late for nonprofits to purchase Mission land for affordable housing. The political obstacle will be the nonprofits and activists in other neighborhoods who do not want most of the city’s housing funding going elsewhere.

The Mission is not the only neighborhood that needs more nonprofit housing dollars. And an argument could be made for the city buying up sites in the Excelsior, before than neighborhood’s prices rise to the stratosphere.

But if we are serious about fundamentally changing the dynamic in the Mission, a special city targeting of funding must occur through the mayor’s Small Sites Acquisition Program and the regular nonprofit housing allocations. Fighting site by site battles absent a massive influx of acquisition money and a pro-active strategy will not get the job done.
Randy Shaw is Editor of Beyond Chron. He discusses pro-active land use strategies in The Activist’s Handbook: Winning Social Change in the 21st Century. His new book, The Tenderloin: Sex, Crime and Resistance in the Heart of San Francisco, will be out in April.