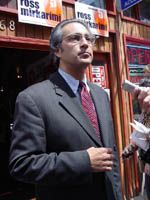 It’s been two weeks since Supervisor Ross Mirkarimi moved into his new digs at City Hall, yet his office remains a surprisingly spartan setting. No pictures hang from the walls, no file cabinets fill up floor space; instead, a medium-sized conference table stands alone in the middle of the room, with just a few chairs for company.

To a casual observer, it could look like Mirkarimi and his staff are unprepared for the job. However, sit down with the new D5 Supervisor at that lonely table for a few minutes, and you’ll realize there’s an entirely different reason for the bare walls – he’s been so busy, so entirely in love with his new job, moving in hasn’t even crossed his mind.

Mirkarimi represents the lone bit of fresh blood at City Hall this year, despite seven Supervisorial races occurring across the City last November. Combining an aggressive, street-level grassroots campaign strategy with a formidable record as a progressive activist, the California Green Party co-founder landed the District 5 slot formerly held by Matt Gonzalez. Mirkarimi ultimately won the race by a respectably large margin, especially considering he fought off more than 20 opponents, several of them formidable, to win.

So far, Mirkarimi’s fresh blood has quickly translated into fresh perspectives on community problems and a seemingly boundless energy for tackling issues. He’s already begun the slow but vital process of organizing the African-American community around problems of violence and poverty, calling for a forum in the Western Addition and Fillmore for late February. He hopes the forum will reveal residents’ “complaints, grievances and dreams,” and that he will come away with a clearly defined strategy for addressing their concerns.

Mirkarimi has also proven willing to work with District 5 activists on a wide variety of issues, including joining forces with those opposed to the widening of MLK Boulevard. But it has been his involvement in citywide legislation that has already garnered Mirkarimi the kind of media attention Supervisors dream about.

Mirkarimi helped create a national buzz for San Francisco with a nascent idea for legislation that would put a tax on shopping bags. The press attention came as a bit of a surprise for Mirkarimi, especially considering how the tax lies in the earliest of stages. Yet rather than bask in the limelight, Mirkarimi has used the experience to learn an important lesson about being a legislator, and about what it will take to transform progressive ideas into concrete pieces of legislation.

When Mirkarimi noticed the national headlines about the legislation, he called around City Hall to make sure a media agenda had been developed. It hadn’t been.

“The hype was premature, but it was obviously being initiated by our foes,” said Mirkarimi, who identified the American Plastics Council as the idea’s primary opponent. “So we were sitting ducks. And I thought, ‘this is no way to go about this.’ I called up the Mayor’s Office, and said, ‘we need to go on the offensive. I’m going on a media offensive, and so are you.’ And luckily, we started to take the message back.”

However, said Mirkarimi, an untruth had already been planted in the mind of the public – that the tax would affect working people the most. He said the experience made him realize that good legislation must not be defined by his opponent. He claims that framing the debate before his opposition had the chance will be an essential component of his future strategy at City Hall.

Mirkarimi responds quickly when asked the most important problem currently facing the City. “It’s obviously the budget,” he says, responding equally as fast when asked what he’s doing about it – “I’m not shying away from it.”

Mirkarimi hopes to push through ideas for additional revenue during the budget crisis rather than simply decrying cuts. He’s already sent two ideas to the legislative analyst for review, including a tax on SUVs and a bond for supportive housing. Mirkarimi also says he wants to be pragmatic about the cuts that must be made, especially when it comes to hot-button issues like civil service jobs.

“I’m interested in civil service reform so it at least looks with an eye of efficiency,” said Mirkarimi. “But I’m not interested in it being done to just cut jobs for the sake of cutting jobs. This requires a very fine scalpel, not a chainsaw.”

Like much of Mirkarimi’s early decisions, his picks for legislative aides were unique. Bucking the trend among supervisors to hire aides that amount to go-fers who run errands, Mirkarimi tapped two individuals well-versed in public policy and community activism that will likely contribute substantially to his administration – Cheryl Brodie and Boris Delepine.

Both aides helped found important, strategic organizations that worked to further the progressive movement in San Francisco. Delepine helped found the Progressive Voter Project, which worked to get progressives registered as permanent absentee voters. Brodie, a long-time community activist in D5, started SF 5 Together. Brodie’s organization worked to make sure that no matter who was elected for supervisor in her district, their representative would work to address neighborhood concerns.

For Mirkarimi, the two represent his hope to balance his efforts between citywide and district-oriented legislation. Delepine, who formerly worked for the Department of Elections, represents the former, while Brodie represents the latter. Mirkarimi hopes to put about 60 percent of his time into citywide issues, and 40 percent into district issues though he recognizes sometimes the opposite ration will be more accurate.

With the City facing a massive deficit and state and federal cuts on horizon, Mirkarimi has entered office at a brutal time. However, he’s already proven himself ready to fight difficult, unpopular fights – take his vote against the smoking ban due to its air of elitism, for example – and he appears to have an unflagging passion for his work.

“What scares me about that this job is that I may like it too much,” said Mirkarimi. “I’m going to have to teach myself to get proper sleep, go work out, spend time with my loved ones.We get here early in the morning, we leave late at night, and I leave saying, damn, this is great.”

With such an attitude, and with a proven mind for political strategy, Mirkarimi may prove progressives’ best chance in years for obtaining what they so desperately need – results.

And if he can get those, no one is going to care how long it takes him to get pictures on the walls.