Mint Plaza: Another Mid-Market Success Without the Redevelopment Agency 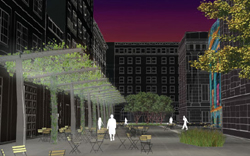 Described by one neighboring property owner as “the greatest thing that ever happened around here,” construction of a European-style plaza with outdoor restaurants, trees and cafes has begun on Mint Alley, which runs off Fifth and Jessie. The dramatic revival of what is being called “Mint Plaza” follows the city’s recent approval of the new Trinity Plaza Apartments at 8th and Market, which include 1900 rental housing units and an open-air plaza featuring restaurants and cafes. Both projects will revitalize San Francisco’s historic Mid-Market neighborhood, and are being developed without any involvement of the San Francisco Redevelopment Agency, which has sought to transform Mid-Market into a Redevelopment Area. With a major condominium project moving forward on Market Street between 5th and 6th Street, Mid-Market is on route to becoming a new San Francisco hot spot. And, best of all, the increased property taxes in the area will go to fund schools, housing, public safety, street repairs and other vital needs, rather than being siphoned off by the Redevelopment Agency.

In April 2007, the San Francisco Board of Supervisors and the Mayor approved legislation to transform a 290-foot-long portion of Jessie Street stretching between Fifth Street and Mint Alley into San Francisco’s newest public open space, Mint Plaza. After construction is completed in September, two vacant alleys will have been transformed to accommodate a wide range of potential future uses, including art exhibitions, theatre, live music, cafés, and small festivals.

As with the Trinity Plaza Apartment project, no public funds will be used to create this great benefit to San Francisco. In fact, the approximately $3.5M project will be donated to the City of San Francisco by Martin Building Company (MBC), and Mint Plaza will be maintained and managed at no cost to the public by Friends of Mint Plaza, a non-profit organization.

Mint Plaza is located within what was once proposed to be a Mid-Market Redevelopment Area. Proponents of such an Area argued that the Agency was needed to spur precisely the type of investment that the MBC has made without such assistance.

The difference, of course, is that Agency “assistance” would have required siphoning hundreds of thousands of taxpayer dollars from the city’s general fund to subsidize Agency economic development staff. Without Redevelopment, MBC, and Trinity Plaza owner Angelo Sangiacomo will spend their own money developing their projects, and money needed for vital city services is not going to either well-heeled developers or the vast Agency bureaucracy.

And when property values increase around the Mint Plaza—as is projected—the sale of these properties will bring important new tax revenue to the city’s general fund.

With the bookends of Mid-Market already being revitalized, the future of the area has not looked this bright for at least thirty years. Consider:

• The approved condominium project at the former St. Francis Theatre on Market between 5th and 6th Streets is being expanded and the revised project will be up for Planning Commission approval early in 2008. The same developer is preparing a project for directly across the street.

• The new Federal Building will increase foot traffic and lunch business around the long-troubled corner of 7th and Market. While the benefits of this project have been vastly exaggerated—the Phillip Burton Federal Building in the Tenderloin has only boosted weekday lunch spots—the building’s new workers will make the area safer.

• The Mid-Market Community Benefits District (CBD) is off and running. If the North of Market CBD is any example, this new entity will stimulate property owner and resident involvement, bring focus to efforts to fill retail vacancies, and enhance the physical environment along Market Street.

Mid-Market is on the verge of becoming one of San Francisco’s leading economic engines. It is one of the few remaining areas left to generate the new property taxes necessary to meet the ever-increasing resident demands for quality city services.

In contrast, unless the Court of Appeal rules in favor of the Bayview-Hunters Point Redevelopment referendum, the huge amount of new property taxes to be generated in that community will bring millions to the Redevelopment Agency but not boost the city’s ability to provide health care, education and public safety. While Mid-Market steams forward without the burdens of the Redevelopment Agency, Bayview-Hunters Point remains saddled with discord, with no imminent prospects for a positive turnaround.

Had Mid-Market become a Redevelopment Area, Agency backers would have taken credit for MBC’s Mint Plaza renovation, as well as for the 1900 units and 60,000 square feet of commercial space at Trinity Plaza. Fortunately, MBC and Angelo Sangiacomo show how economic development does not require the Redevelopment Agency, a fact San Francisco’s political leadership should have learned from the Agency’s dismal performance in the Fillmore District over the past two decades.