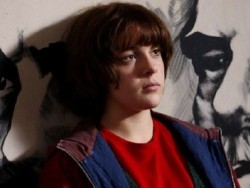 In this world, people display insanely sensitive senses of smell that would shame a skilled wine connoisseur. Shots of unusual shrimp and stuffed chicken dishes may set one’s mouth drooling.

The kung fu fight sequences provide tasty visuals. The younger male lead gets a fun noodle preparation/kung fu fight and a chaotic supermarket fight. The older Hung’s fight sequences may lack jaw-dropping visuals, yet he plausibly holds his own when he’s badly outnumbered.

Commercial films such as “Kung Fu Chefs” offer viewers a pact. In exchange for reasonable amounts of visual dazzle and amusement, puddle-thin characters and pothole-sized plot holes will be overlooked. Yip’s film ably honors its entertainment obligations. The viewer need only regard its proceedings benevolently.

In 1952 Warsaw, mousy Sabina (Agata Buzek) works as poetry editor for Nowina Publishing House. Her main concerns in this Communist-controlled land are avoiding notice by the secret police and resigning herself to a probable future of permanent spinsterhood. An encounter with the handsome if mysterious Bronislaw (Marcin Dorocinski) offers Sabina life-changing possibilities. But the editor’s growing relationship with the mystery man leads to opportunities she had not expected.

Passion in several guises may provide the motivating engine for the characters’ actions. Yet there is no sense of urgency that makes satisfying that passion important to the viewer. Even the crime Sabina commits never feels desperate.

To be fair, the film’s black and white sequences do contain some gorgeous moments. A particular kissing scene visually alludes to a similar kiss among autumnal trees.

What ultimately dooms “The Reverse” artistically is its failure to earn its moral ambiguity. Lankosz wanted the viewer to re-evaluate Sabina as more than a simple repressed editor. Yet, though Buzek possesses the type of masklike face on which the tiniest expression of emotion becomes a shout, the case is never made for her being tempted by an opposing course of action. Given the usual type of foreign film that gets Academy Award nominations and awards, “The Reverse” is the type of high gloss sentimental twaddle that will probably gain Oscar notice.

The coming of age story has long been a staple of Hollywood filmmaking. But it’s highly doubtful that the story Susanna Nicchiarelli tells in “Cosmonauta” will be retold by Hollywood any time soon.

One instantly falls in love with Luciana’s character from the film’s start. Beginning with her avowed allegiance to Communism at age 8, her rebellious nature gets confirmed in adolescence when she puts out her cigarette in her mother’s wedding cake. Even when Luciana’s behavior takes a turn towards the obnoxious, one understands that it’s less about personal cruelty than a mask for dealing with life’s disappointments.

The film’s frequent references to Soviet space efforts are more than just framing devices. They’re metaphors for the duo’s hopes for a wider and better future than their otherwise conservative life allows. The film’s final images symbolize that time, whether it’s adulthood or history, has its way of tempering idealism.

Nicchiarelli doesn’t minimize the politics of her setting. Instead, her film delightfully weaves together leftist politics with familiar adolescent heartaches. The result for the audience is an entertaining period piece.

If a more heartbreaking film than Feo Aladag’s “When We Leave” has screened this year, that hypothetical film has not impressed itself on this viewer’s memory. Aladag’s debut feature charts within one family the tragic results of collisions between community standing and individual freedom, cultural sexism and feminine self-determination, and trust and betrayal.

Sibel Kekilli (“Head On”) anchors the film as Umay, a woman who takes her son Cem and leaves her physically abusive husband Kemal. Yet Umay’s return to the family home for refuge creates a crisis in her conservative family. They feel her unwillingness to quietly live under her husband’s heel has disgraced their community standing. Umay wants both personal independence and family support, yet she may be unable to obtain either or both.

Aladag wisely adopts a cinema verite approach to her material. For the film’s emotional shocks come from seeing Umay’s trust in her family continually being betrayed. The sight of one brother ferociously pushing or kicking his sister is especially disturbing.

Is Aladag’s film culturally insensitive? Only if you agree with its male characters that women seeking their independence are sluts and whores. Umay’s heartbreaking problem is her sincere belief that a middle ground can exist between Turkish tradition and German modernism. Perhaps wiser viewers can offer a better answer.

(“When We Leave” is this year’s Berlin And Beyond Film Festival Centerpiece film. The film screens October 24, 2010 at 7:00 PM at the Castro Theatre (429 Castro Street (at Market), SF). Advance tickets are available at www.berlinbeyond.com )