Milk Club Stays Out of Mayor’s Race … For Now 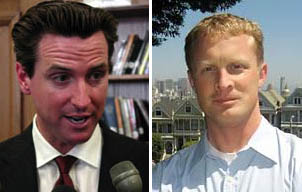 The Harvey Milk LGBT Democratic Club failed to endorse any of the Mayoral candidates at its general membership meeting last night, after no candidate received the necessary 60% for an endorsement. But progressive challenger Quintin Mecke and incumbent Mayor Gavin Newsom were the top two vote-getters, and the Club will reconsider a Mayoral endorsement at its September 4th PAC meeting.

The Club voted to endorse District Attorney Kamala Harris and Sheriff Michael Hennessey in their re-election bids, and did an early endorsement of Tom Ammiano in his run for State Assembly. The Club overwhelmingly endorsed a “yes” vote on Prop A (the Muni Charter Amendment) and a “no” vote on Prop H (the Downtown Parking Initiative.) The Club will consider what to do about the nine other local propositions on the November ballot at the September 4th PAC meeting.